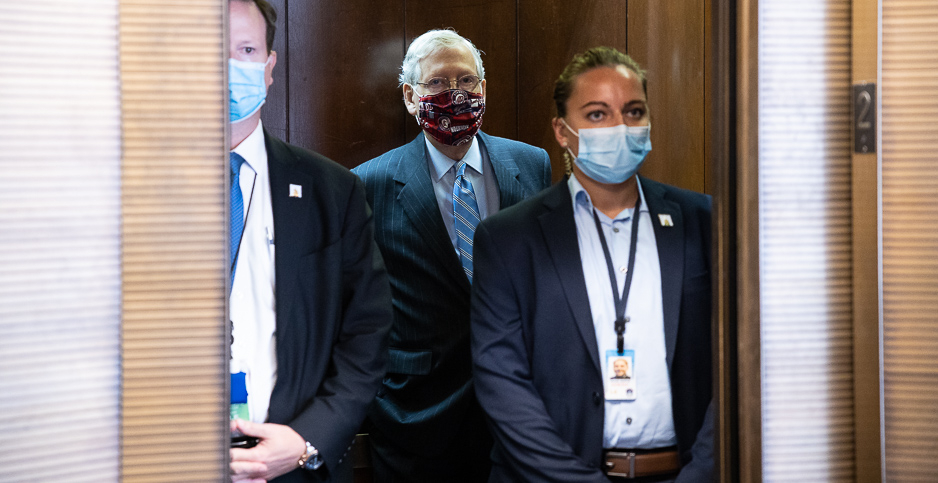 Senate Majority Leader Mitch McConnell (R-Ky.) is promising a vote on President Trump’s nominee to replace the late Justice Ruth Bader Ginsburg, but some GOP lawmakers may end up thwarting the party’s attempt to seat a third Trump justice.

Lawmakers focused on expressing their condolences but could not avoid weighing in on the coming confirmation battle.

And McConnell wasted no time last night, announcing: "President Trump’s nominee will receive a vote on the floor of the United States Senate."

Trump, after praising Ginsburg’s "amazing life" upon hearing the news of her death, this morning began his public pressure campaign on GOP senators.

"We were put in this position of power and importance to make decisions for the people who so proudly elected us, the most important of which has long been considered to be the selection of United States Supreme Court Justices," Trump said.

But Senate Minority Leader Chuck Schumer (D-N.Y.), echoing McConnell’s exact phrasing following Justice Antonin Scalia’s February 2016 death, said, "The American people should have a voice in the selection of their next Supreme Court Justice. Therefore, this vacancy should not be filled until we have a new president."

"They must exhibit a shred of integrity and recognize that abandoning their word now, and breaking all precedents by ramming a nominee through — most likely after the election — would cause the nation tremendous pain," said Leahy.

In a statement last night, McConnell defended his reasoning for blocking Garland and said that case involved a lame-duck president of a different party. He said America then chose a GOP Senate to keep a check on Obama.

"Americans reelected our majority in 2016 and expanded it in 2018 because we pledged to work with President Trump and support his agenda, particularly his outstanding appointments to the federal judiciary," McConnell said last night. "Once again, we will keep our promise."

The question is whether a Supreme Court vote this year will succeed. Republicans have a 53-member majority in the Senate, but four GOP lawmakers opposing the president’s nominee or the process could scuttle the confirmation. Vice President Mike Pence would be able to break a tie.

Several GOP lawmakers have said in the past that senators should wait until after an election if a Supreme Court vacancy happens this late in the process, but with intense pressure from the White House and McConnell, many of those promises may likely fade.

Other Republican senators to watch include Energy and Natural Resources Chairwoman Lisa Murkowski of Alaska, Mitt Romney of Utah and Susan Collins of Maine. Collins, like Gardner, is also facing a tough reelection battle.

Murkowski told Alaska Public Media yesterday — just hours before Ginsburg’s death was announced — that she would not agree to a Trump appointment before the inauguration.

"I would not vote to confirm a Supreme Court nominee. We are 50-some days away from an election," Murkowski said.

Collins — whose race is a top focus for Democrats for her support of Justice Brett Kavanaugh — told The New York Times in recent weeks she would not vote to confirm a nominee before the election.

"I think that’s too close, I really do," Collins said. She said she would also not vote to confirm a Trump pick during the lame duck if he loses the election.

The timeline for considering the president’s nominee is uncertain. It took Trump roughly two weeks to announce a replacement for retiring Justice Anthony Kennedy. It has taken longer with other vacancies.

It then usually takes more than a month before confirmation hearings can begin. The Senate is already set to recess early next month so lawmakers can campaign for races that will decide the balance of power.

The confirmation hearings and vote, as a result, will almost certainly happen during the lame duck, when members will likely know their political fate.

Changes in Senate rules give the minority partly little leverage to block Trump’s pick, but an acrimonious fight lies ahead.

"Let me be clear: The voters should pick a president, and that president should select a successor to Justice Ginsburg," Democratic presidential nominee Joe Biden said.

But in his tweet this morning, Trump said, "We have this obligation, without delay!"