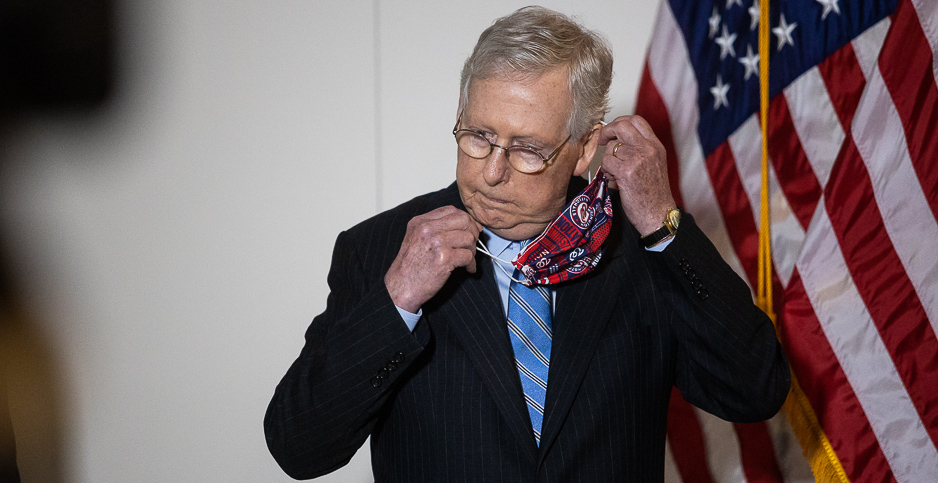 In a statement, McConnell said Senate Republicans will be introducing a new proposal today. McConnell said he would set up a vote for as soon as this week.

"It does not contain every idea our party likes. I am confident Democrats will feel the same," said McConnell. "Yet Republicans believe the many serious differences between our two parties should not stand in the way of agreeing where we can agree and making law that helps our nation."

McConnell’s gambit comes as pandemic relief negotiations between congressional Democrats and the Trump administration have been stalled for weeks due to a disagreement over the size of a package.

House Speaker Nancy Pelosi (D-Calif.) has said repeatedly that the White House must increase its offer for the package from $1 trillion to $2.2 trillion.

She and Senate Minority Leader Chuck Schumer (D-N.Y.) have already offered to come down from the $3.4 trillion "Health and Economic Recovery Omnibus Emergency Solutions (HEROES) Act" that passed the House in May and that represents the Democratic position in the talks.

But Senate Republicans have balked over adding to the deficit, citing the trillions of dollars already enacted to help weather the pandemic’s health and economic fallout.

Although the Senate GOP in late July released a $1 trillion relief package known as the "Health, Economic Assistance, Liability Protection and Schools (HEALS) Act," the "skinny" proposal coming today is estimated to cost about half.

Schumer last week urged his caucus to stay united against what he called the new "emaciated" bill coming from Republicans, which includes funds for schools, small businesses, liability protections and a pared-back extension of enhanced unemployment benefits that expired in July.

He and Pelosi are pressing for a more comprehensive package rather than a "piecemeal" approach to legislating pandemic relief.

McConnell took a shot at both Democratic leaders today for that position, noting that Pelosi brought the House back last month "to pass the most piecemeal bill imaginable: Postal Service legislation that completely ignored the health, economic and education crises facing families."

"Everything Speaker Pelosi and Leader Schumer have done suggests one simple motivation: They do not want American families to see any more bipartisan aid before the polls close on President Trump’s reelection," McConnell said. "They have taken Americans’ health, jobs and schools hostage for perceived partisan gain."

With the fiscal year closing at the end of this month, a continuing resolution is also expected to be folded into another COVID-19 relief package should a deal emerge (E&E Daily, Sept. 8).

In a joint statement, Pelosi and Schumer slammed McConnell for his decision earlier this year to pause talks on more COVID-19 relief.

"Now, after months of inaction, Republicans are finally realizing the damage their pause has done to the American economy and our nation’s health," the top Democrats said. "As they scramble to make up for this historic mistake, Senate Republicans appear dead-set on another bill which doesn’t come close to addressing the problems and is headed nowhere."