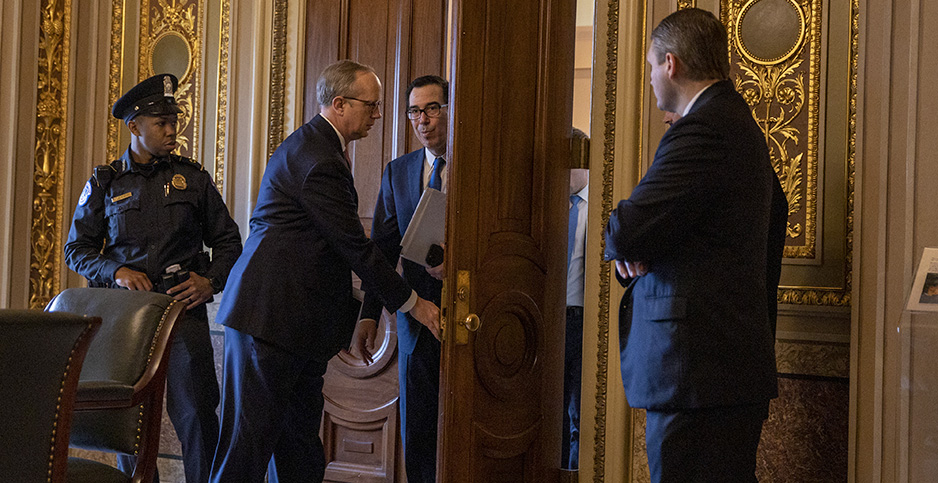 McConnell added that Democrats "won’t let us fund hospitals or save small businesses unless they get to dust off the Green New Deal."

The Senate could vote again on the legislation as soon as this afternoon, but publicly, Democrats’ objections had little to do with clean energy. Minority Leader Chuck Schumer (D-N.Y.) didn’t even mention the issue during his opening remarks on the floor this morning.

"We’ve been guided by one plan: workers first. That is in the name of our proposal," Schumer said in his own remarks on the floor this morning. The bill, he said, "needs to reflect that priority."

Top Democrats have given few indications that they’re pushing intensely to add solar and wind incentive extensions to this round of congressional aid, though lawmakers on both sides of Capitol Hill have suggested the idea as a way to bolster the clean energy sector.

McConnell’s attacks, however, came after Democrats said they would press for relief for clean energy interests if Republicans insisted on bringing President Trump’s pledge to fill the federal Strategic Petroleum Reserve into the talks.

"If we’re going to include relief for oil producers via SPR buys, Congress should also include assistance for clean energy companies who are facing their own unique challenges," a Democratic aide told E&E News.

But Schumer said Senate Republicans, Democrats and members of the administration continue to negotiate and were close to a deal. Treasury Secretary Steven Mnuchin left Schumer’s office after midnight and was back at 9 this morning, Schumer said.

The picture on clean energy may come into focus this afternoon, when Pelosi is expected to outline the House Democrats’ idea of an economic stimulus bill. A brief outline of the legislation provided by her office this morning did not mention energy or environmental issues.

"The Senate Republicans’ bill, as presented, put corporations first, not workers and families," Pelosi said in a statement. "Today, House Democrats will unveil a bill that takes responsibility for the health, wages and well-being of America’s workers: the Take Responsibility for Workers and Families Act."

But it’s clear that environmental groups are going to lobby for climate and clean energy language as long as Congress is still negotiating (E&E Daily, March 23).

Many of the proposals — such as massively boosting the Department of Energy’s Weatherization Assistance Program, Low Income Home Energy Assistance Program and Advanced Research Projects Agency-Energy — are standard fare for climate advocates.

Daniel Aldana Cohen, one of the plan’s authors, said it is largely a result of lessons that he and others learned from the American Recovery and Reinvestment Act of 2009 and other economic stimulus efforts in that time period. Cohen is a sociology professor at the University of Pennsylvania who helped advise Sen. Bernie Sanders’ campaign on climate and environmental matters.

Cohen said major industries are already mapping out strategies for a stimulus, so it’s never too early to plan.

"They know a stimulus is coming, and they know it’s not a question of whether there will be a stimulus, but what kind of stimulus, how big, which parts of the economy, which priorities," he said.

"We’re not taking advantage of this to pursue some partisan agenda," he said. "We need to create jobs, and we know that a dollar in green spending is worth more jobs than a dollar in fossil fuels."

The plan isn’t explicitly presented as a tie-in to the Green New Deal, but Cohen said it’s "compatible" with the proposal and that a major economic stimulus provides a key opportunity to get started on the kind of spending the Green New Deal would involve. "We see this as a pragmatic thing, and we want to get as much of this done as possible," he said.