McConnell to vote ‘no’ on Regan, Haaland 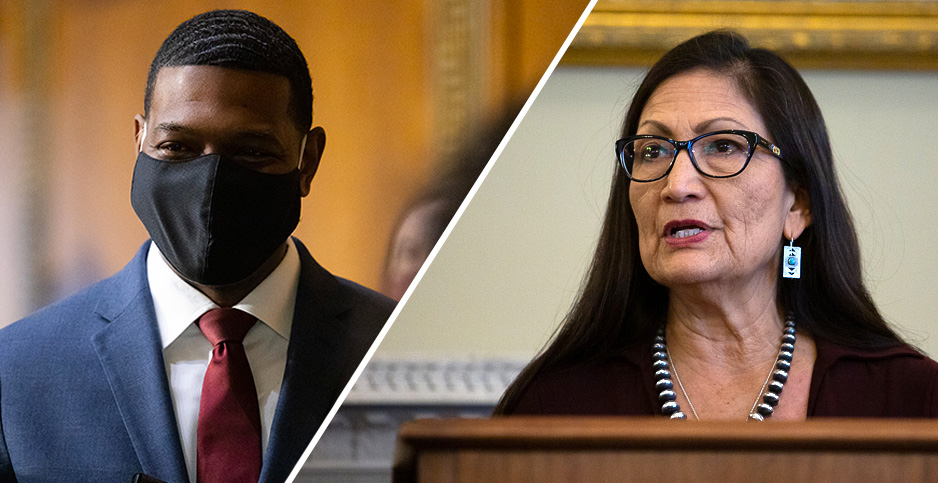 Senate Minority Leader Mitch McConnell will oppose Michael Regan to lead EPA and Rep. Deb Haaland to lead the Interior Department, distinguishing them from others of President Biden’s picks as being "outside the mainstream."

"They both report right to the front lines of the new administration’s left-wing war on American energy," the Kentucky Republican, who has deep sensitivities to policies he sees as hostile to his coal-producing state, said on the Senate floor this morning.

"We have every reason to believe that voting for Mr. Regan and Rep. Haaland would be voting to raise gas taxes for families who are already struggling, voting to raise fuel and heating bills for seniors on a fixed income, voting to take the tough times we’ve been going through and make them even tougher," he added. "I’ll be voting for American families and against both of their nominations."

McConnell said Regan, the secretary of North Carolina’s Department of Environmental Quality, who will receive a procedural vote later this afternoon, is a "longtime regulator and activist."

Regan has "plenty of experience," McConnell said. "The problem is what he’s poised to do with it. He and the administration are plainly prepared to put that experience behind the same far-left policies that crush jobs and prosperity in states like Kentucky. … The Clean Power Plan? Back on the table. The absurd Waters of the United States Rule? Back on the table."

McConnell concluded, with regard to Regan, that "Kentuckians know when bad policies like those are on the table, it means their jobs, their livelihoods and their communities are on the menu."

Haaland, meanwhile, was "literally an original co-sponsor of the Green New Deal" who, said McConnell, "voted to, quote, ‘keep fossil fuels in the ground,’ end quote, and once pledged, quote, ‘to vote against all new fossil fuel infrastructure.’"

McConnell contended that Haaland, a second-term New Mexico Democratic congresswoman, would perpetuate the "false choice" between "a clean environment and domestic energy independence."

McConnell’s comments came as Regan has enjoyed some modicum of bipartisan support, as far as Biden’s more contentious nominees go. Regan cleared the Environment and Public Works Committee last month on a 14-6 vote, with four Republicans joining all Democrats on the panel voting "yes."

Off the committee, other Republican senators — including Sens. Richard Burr and Thom Tillis, who hail from Regan’s home state of North Carolina — had said they would support the EPA administrator contender, as well.

Sen. Kevin Cramer (R-N.D.), said in a statement today that Regan has staked his reputation on being "a consensus builder" and has committed to visit North Dakota.

"I am under no illusion our policy preferences are aligned, but I take him at his word that cooperation will be the cornerstone of his time as administrator. I will vote to confirm him and expect to see his rhetoric turn into real results," said Cramer, who voted for Regan in EPW.

That is more Republican support than has been promised to Haaland, and it remains to be seen how McConnell’s announcement of opposition could affect GOP senators who have yet to make a public statement for or against the Interior nominee.

In the Senate Energy and Natural Resources Committee, just one Republican member, Sen. Lisa Murkowski of Alaska, sided with all Democrats in voting to send Haaland’s nomination to the Senate floor, in a 11-9 vote.

Only one other Senate Republican, Susan Collins of Maine, has so far committed to voting to confirm Haaland.

This comes as at least two Senate Republicans are pledging to use every tool in the chamber’s procedural arsenal to prevent Haaland from being confirmed expeditiously.

Sens. Steve Daines of Montana and Cynthia Lummis of Wyoming are leading the opposition, having placed "holds" on Haaland’s nomination that will considerably slow down the process.

Ultimately, however, like Regan, Haaland has the votes to be confirmed, even if by a narrower margin.