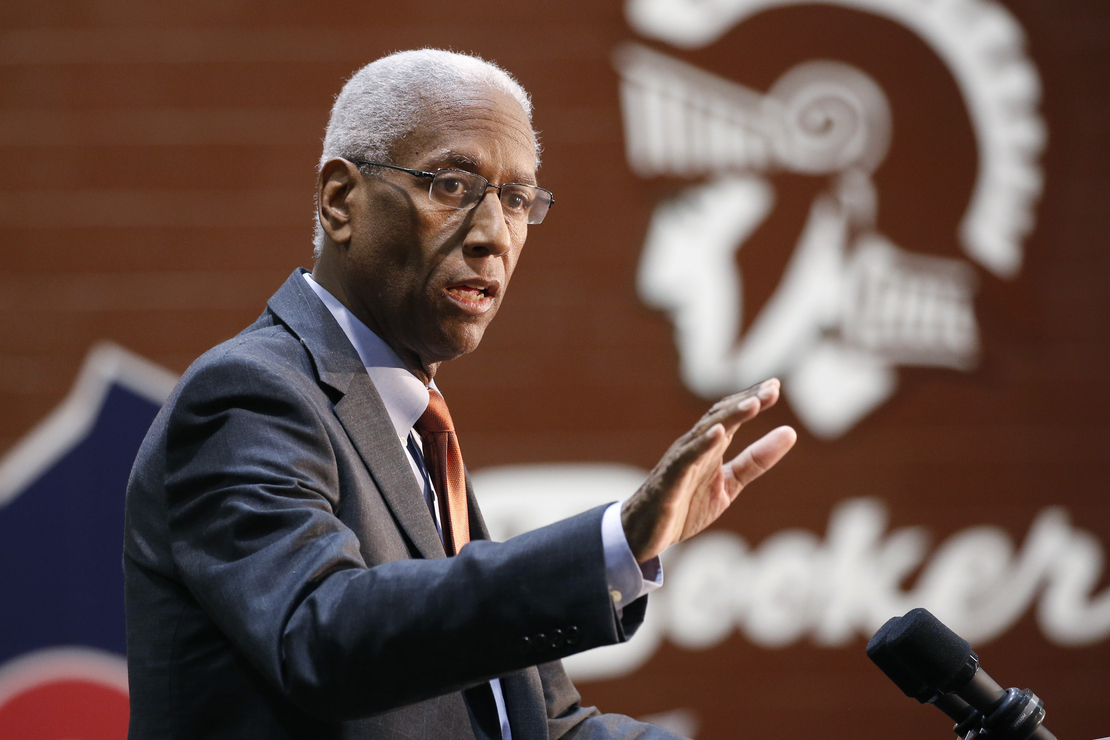 Rep. Donald McEachin (D-Va.) during a rally in 2020. He died this week. Steve Helber/Associated Press

The sudden death of Rep. Donald McEachin has strengthened the resolve of some of his colleagues to push for a vote on the environmental justice legislation he long championed.

A House vote on the “Environmental Justice for All Act” would be a capstone to years of work by McEachin (D-Va.) and community activists who for decades were largely ignored by Congress and the broader environmental movement.

The bill, H.R. 2021, has almost no chance of passing the Senate, and it’s possible there may not even be enough votes to pass the House. But Democratic supporters said they hope to score a symbolic victory on the House floor in honor of McEachin, who died this week from secondary effects of colorectal cancer (E&E Daily, Nov. 29).

“What a wonderful gesture that would be for a man that devoted his life to equity, clean energy, climate and environmental justice,” said Rep. Kathy Castor (D-Fla.) who chairs the Select Committee on the Climate Crisis, on which McEachin served for the past four years.

Castor and other Democrats on the select committee sent a letter to House leadership Wednesday urging a vote on the “EJ for All Act” before Democrats cede control of the chamber to Republicans at the end of this year.

Castor said she also raised the issue with House Majority Leader Steny Hoyer (D-Md.) during a meeting Wednesday morning and got a “positive response.” Democrats want to rename the bill in McEachin’s honor, Castor said.

The “EJ for All Act” passed out of the House Natural Resources Committee along partisan lines in July after a contentious markup. It was written over the course of several years with input from environmental justice advocates and marked the culmination of cross-country listening tours and fact-finding missions (E&E Daily, July 28).

“The work he did was essential. We wouldn’t have finished the process without him,” Grijalva said of McEachin.

The bill would make major changes to the nation’s bedrock environmental laws and allow more intensive community input into the siting of fossil fuel projects.

It also would vastly expand the power of polluted communities to reject projects that can spike local rates of cancer and respiratory disease and cause long-term pollution. Those provisions were a tough sell for Republicans, who oppose new regulations, but also moderates, who are wary of opening up longstanding laws like the National Environmental Policy Act.

But Castor noted that the “EJ for All Act” has 108 co-sponsors, a huge chunk of the current House Democratic Caucus. Environmental justice has also become a marquee issue for the party in recent years, following the protests after George Floyd’s death at the hands of police in 2020. President Joe Biden’s campaign also highlighted the issue.

“Everyone loved Don and respected him, and I’m hopeful that, especially with over 100 co-sponsors already, it would sail through,” Castor said.

Getting the bill to the floor could be an uphill battle. Few days are left on the legislative calendar, and limited floor time, competing priorities and a strong desire among lawmakers to get home for the holidays are all complicating factors.

Grijalva shrugged off the logistical concerns: “An hour and a half or two on a bill that was three and a half years in the making, I don’t think it’s asking too much.”

Progressives had been agitating for a vote on the “EJ for All Act” for months, since the Natural Resources Committee advanced it over the summer.

In the fall, their success in beating back an effort from Senate Energy and Natural Resources Chair Joe Manchin (D-W.Va.) to overhaul the nation’s permitting process — which might have undermined the mission of the “EJ for All Act” to empower front-line communities — made them more bullish in their demands.

“I think we’re owed a vote, quite frankly,” McEachin told E&E News in October. “We’ve been working on this bill, now, for a number of years — my whole time in Congress, to be truthful with you — and the time has come to get up and get it out now” (E&E Daily, Oct. 11).

On Nov. 18, more than a week before McEachin’s death, Grijalva quietly sent a letter to House Democratic leadership asking for the bill to be taken up during the lame-duck session.

“Over the past few years, Rep. McEachin and I have spoken to and visited environmental justice communities and advocates in every corner of the country to better understand their needs as we drafted this legislation,” Grijalva wrote to Hoyer and House Speaker Nancy Pelosi (D-Calif.).

While Grijalva noted that some components of the measure had already been passed in other pieces of legislation, “it is imperative that we fully consider the bill in its entirety … to comprehensively address the needs of environmental justice communities.”

A major component of the bill deals with “cumulative impacts,” which would require permitting decisions under the Clean Water Act and Clean Air Act to account for the cumulative effects of harmful emissions.

That language has been the point of some contention, even among Democrats, leading one senior House Democratic aide who was granted anonymity to be candid, to caution earlier this year that “parts of the bill can’t pass the House.”

But at this point, Grijalva said, it’s more about symbolism and principle than anything else.

“I think it’d be a fitting legacy, even if his colleagues in the House do something and the Senate doesn’t,” Grijalva said.

Whether or not it passes the Senate, he continued, is “irrelevant because that would be historic at this level, and it would raise the profile of environmental justice to the point where everybody has to be careful about how they move forward.”

First elected to represent Richmond in 2016, McEachin dedicated much of his congressional career to environmental justice.

In the hours and days after his death was announced, tributes from colleagues and allies poured in, praising his legacy. In Oregon, the governor there ordered flags to be flown at half-staff in his honor.

“I was particularly honored to partner with him on legislation to advance environmental justice and secure a cleaner, healthier, and more fair future for all,” said Vice President Kamala Harris, who co-sponsored the “EJ for All Act” when she served in the Senate.

McEachin championed the issue and met frequently with community activists well before environmental justice became a bedrock talking point for Democrats across the ideological spectrum.

In addition to the House climate panel, McEachin served in the 117th Congress on both the Natural Resources and the Energy & Commerce committees, a rare double assignment that gave him a larger platform to push for the “EJ for All Act” and other climate change legislation.

Democrats said he brought much-needed moral authority to energy and environmental issues, as they pushed the Inflation Reduction Act into law and debated EJ legislation over the past two years.

“You can get caught up in the clean energy aspect, but he always brought it back to the fundamentals — that clean air and clean water are especially important to front-line communities,” Castor said.

Rep. Ro Khanna (D-Calif.), an environmental justice advocate, said McEachin was well-respected across the Democratic caucus for his legislative focus.

“He brought a moral seriousness to it because he was not someone who was always on TV or courted the press,” Khanna said.

McEachin served on one of several unity task forces for then-candidate Joe Biden, a sign of his influence on the Democratic Party’s environment and climate agenda.

“People wanted to listen to him; they couldn’t just shout him down,” said Huffman, who served with him on the Natural Resources Committee as well as on the climate panel. “So when he engaged on something like environmental justice, he just brought so much credibility and personal capital and moral clarity.”

“This was his passion, this was his love, and he was willing to share this space with others like me and bring people in because he wanted as many people as possible talking about the issue,” she said.