McIntyre soldiers on at FERC after brain cancer diagnosis 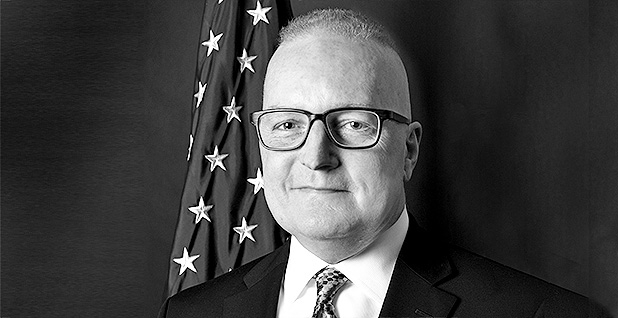 Kevin McIntyre, chairman of the Federal Energy Regulatory Commission, said in a statement last night that he was treated for a brain tumor that doctors discovered last summer. FERC/Wikipedia

Kevin McIntyre, chairman of the Federal Energy Regulatory Commission, is recovering from a recent surgery to treat brain cancer as he leads an agency that has become a central player in shifting debates around U.S. energy policy.

McIntyre, 56, released a statement last night as E&E News was preparing to run a story on the cancer diagnosis and treatment. It was the first public acknowledgement of the health issue since he took the chairman’s gavel at FERC on Dec. 7. McIntyre’s statement, posted to FERC’s website and then to Twitter at around 8 p.m., said Congress and the White House had known about the health issue. Top staff at the agency and select utility industry players were also aware of it.

"I have chosen to issue this statement disclosing a health issue that arose unexpectedly last summer. Through an incidental finding, i.e., a medical issue discovered by accident, I was diagnosed with a brain tumor. I was very fortunate that the tumor was relatively small, that I had no symptoms, and that I was otherwise in excellent health," McIntyre said in the statement.

"Thereafter, I underwent successful surgery, followed by the post-operative treatment that is the standard of care for my situation," he said. "I was advised at the time that, with the surgery and subsequent treatment behind me, I should expect to be able to maintain my usual active lifestyle, including working full time, and that expectation has proven to be accurate."

Citing "reasons of personal and family privacy," McIntyre said he would not "provide further details or updates on this subject."

The statement did not mention the word "cancer," but sources told E&E News that is how McIntyre previously had described the diagnosis. It also did not describe a prognosis.

McIntyre joins other important figures to battle cancer while serving at a high level in government, including Sen. John McCain of Arizona and Maryland Gov. Larry Hogan, both of whom disclosed their illness to constituents before undergoing treatment and recovery.

Multiple sources with knowledge of McIntyre’s illness, within FERC and among professionals whose work involves agency proceedings, would speak only on background for this story given its sensitive nature.

"I’ve been wondering how long it would be before this was more widely known," said a former senior FERC official.

McIntyre declined a request for an interview or to respond to questions emailed on Friday about the illness, its prognosis, whether the White House was aware of the condition at the time of his nomination, his ability to fully perform the duties of FERC chairman and why he chose to not speak publicly about it since being sworn in.

It is unknown to what extent senators — including those on the Energy and Natural Resources Committee, which vetted and approved McIntyre — were aware of his health condition during the confirmation process. The committee did not comment for this story.

The White House also did not respond to a request for comment.

Questions had been raised about McIntyre’s status as President Trump’s pick for FERC chairman in the three months between his Sept. 7 Senate confirmation hearing and his swearing-in. The public reason given by FERC for the unusually lengthy delay in taking the oath of office — the Senate approved his nomination on Nov. 2 — was that McIntyre was unwinding the Jones Day law practice he had led for many years.

While that reason may have been accurate, at the same time there was no mention by FERC of the role his illness also may have played in the delay. In late November, Commissioner Neil Chatterjee, who was then FERC chairman, told reporters that people should not buy "conspiracy theories" about why McIntyre was not yet sworn in. One such theory was that the delay reflected a reconsideration by the Trump administration in favor of Chatterjee remaining chairman, at least for a time, to preside over some personnel changes at the agency.

"It’s simply a matter of timing, prioritization, getting documents signed," Chatterjee said. "People have to unwind their own professional obligations and their current jobs before they can transition over."

McIntyre hit the ground running in December, asking on his first day for an additional month to reply to a controversial Department of Energy request that FERC act to protect nuclear and coal-fired power plants unable to compete in electricity markets.

Since then, he has maintained a vigorous schedule of meetings at FERC with a wide range of electric and natural gas industry stakeholders and spoken to key constituencies such as the National Association of Regulatory Utility Commissioners. He has also traveled, as he did last week to Houston to speak at CERAWeek. And he has been executing the core part of his job as chairman — setting the agency agenda and running its monthly meetings.

"He spent a solid hour with me and had a lot of good questions about what I was there to discuss," said a lobbyist who met with McIntyre in late February.

There were about 23,800 new cases of brain and related cancers in 2017, according to the National Cancer Institute.

The most common and "most aggressive" malignant tumor is glioblastoma, with about 13,000 cases per year, said Dr. Michael Lim, director of brain tumor immunotherapy and a professor of neurosurgery at Johns Hopkins University in Baltimore.

Glioblastoma is the type of cancer that McCain is battling and was the cancer that the late Sen. Ted Kennedy of Massachusetts fought before dying.

But there are many types of brain tumors, and each presents different treatment challenges, Lim said. Some require surgery, and almost all need chemotherapy or radiation treatment, he said. Every individual’s case is different, he added.

Among the "less threatening" types of brain cancers is meningioma — the most common primary brain tumor — which can be benign, and "if you can get it all out, they can be cured," Lim said.

The cancer diagnosis of a public official or high-profile corporate leader is often made public. Such acknowledgements are usually part of an effort to reassure constituencies or shareholders of a person’s ability to serve in his or her job even with the challenge of a serious medical condition.

In addition to McCain and Kennedy, similar disclosures have been made by Sens. Angus King of Maine and Mazie Hirono of Hawaii as well as Rep. Debbie Wasserman Schultz of Florida.

Berkshire Hathaway Inc. CEO Warren Buffett in 2012 discussed his prostate cancer in a letter to shareholders. And Apple Inc. co-founder and CEO Steve Jobs went public in 2004 with his diagnosis of pancreatic cancer, which claimed his life in 2011.

Maryland’s Hogan announced in 2015 that he was diagnosed with and would be treated for non-Hodgkin lymphoma. The state’s media chronicled it closely at the time. Earlier this year, he revealed a separate bout with a nonserious form of skin cancer.