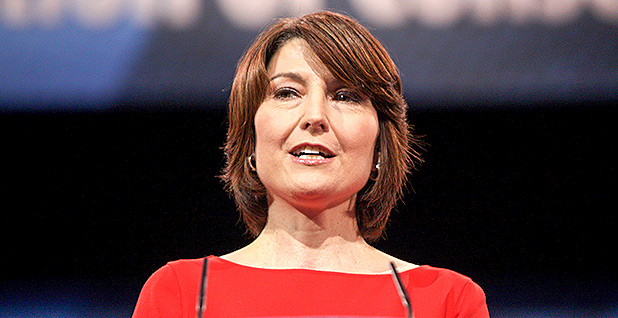 This story was updated at 1:20 p.m. Monday, Dec. 19, to include a statement from McMorris Rodgers’ office.

But things can change quickly in the Trump transition.

By early this week, her stock appeared to have fallen in Trump world, and the president-elect has now reportedly offered the job to Rep. Ryan Zinke (R-Mont.).

A source close to McMorris Rodgers blamed the Trump team for pushing the original press reports about her pick.

It’s not entirely clear what caused the shift. It’s possible that an ethics scandal that became public almost three years ago sparked concerns within Trump’s team that it could cause problems during a confirmation hearing. Trump’s rapid pace of naming top officials has sparked criticism that his operation hasn’t been thoroughly vetting its candidates.

"It was an honor to be invited to spend time with the President-elect, and I’m energized more than ever to continue leading in Congress as we think big, reimagine this government, and put people back at the center of it," the Washington Republican wrote on her Facebook account last night.

Trump’s public vetting process for Cabinet officials is making the contenders quite popular while they’re in the running. They’re hounded by reporters and eyed by those seeking jobs in the Trump administration. For some, there’s a big downside: the humiliation that comes from losing a very public contest.

McMorris Rodgers is only the latest also-ran in the contest for Interior secretary. One of Trump’s early meetings was with Oklahoma Republican Gov. Mary Fallin, who was also considered the leading contender for the job for a time.

The source close to McMorris Rodgers said that despite the press reports last week "driven by the transition team," she "never received an offer to be secretary of the Interior."

McMorris Rodgers attended her second meeting with Trump on Monday, the same day that Trump had scheduled sit-downs with Zinke and Rep. Raúl Labrador (R-Idaho), both of whom were viewed as possible rivals for the Interior job. Trump may have used that meeting to inform McMorris Rodgers that she was out of the running.

After she left the Monday meeting in Trump Tower, McMorris Rodgers declined to discuss the content of their talk but had only positive things to say about the president-elect.

"I walk away just reminded that he’s a man of action, and I’m very enthusiastic about the leadership that he’s bringing — his commitment to make America great, get the economy growing, getting jobs and really rethinking these federal agencies. He wants them to work," she said, according to pool reports. "It was really good to spend time with him today."

Some of the potential reasons she lost Trump’s favor are political baggage that could have complicated a confirmation hearing and her views on selling off public lands.

She has been the subject of a three-year ethics investigation — surrounding the allegedly improper use of congressional resources for campaign purposes — that appears to be ongoing (Greenwire, Dec. 13).

She also appears to have diverged from Trump on the hot-button issue of whether the government should sell public lands.

In Congress, McMorris Rodgers co-sponsored legislation with Utah Republican Rep. Jason Chaffetz and others that would have required the Interior Department to sell some 3.3 million acres of land to the highest bidder to help reduce the federal deficit. Trump, meanwhile, has vowed that his administration would honor the "legacy" of President Theodore Roosevelt, saying that his White House would protect public lands for hunters, anglers and other outdoor enthusiasts (E&E Daily, Dec. 7).

Kara Hauck, a spokeswoman for McMorris Rodgers, said, “It’s clear that Congresswoman McMorris Rodgers and President-elect Trump have a shared desire to protect access to hunting and fishing on lands suitable for such purposes."

She added, "McMorris Rodgers has a track record of withholding her support of bills introduced in Congress that would allow for the widespread transfer of federal land to private entities, and she has consistently supported bills to protect the rights of hunters and anglers.”

Environmental groups were quick to slam McMorris Rodgers’ expected nomination, although many were similarly dismayed by Zinke’s expected pick. Some conservation groups have expressed optimism over Zinke, who has opposed past efforts to sell public lands (see related story).

In the aftermath of the announcement that McMorris Rodgers had been overlooked, many of her colleagues and supporters offered pick-me-ups via social media, for which McMorris Rodgers expressed her gratitude.

House Speaker Paul Ryan (R-Wis.) wrote, "@Cathymcmorris fights every day to restore self-government and give Americans a greater voice, and we are lucky to have her in the House."

McMorris Rodgers replied to Ryan, "Thank you, @SpeakerRyan. Very excited for all we’re going to accomplish in the 115th."

She also got a shoutout from her fellow Washington Republican Rep. Dave Reichert, who said on Twitter, "Very grateful @cathymcmorris will be staying in the WA delegation. She’s a dear friend and colleague."

McMorris Rodgers wrote back, "Thank you, Dave. WA will always be my home and first priority. Grateful to represent the people of the 5th District."