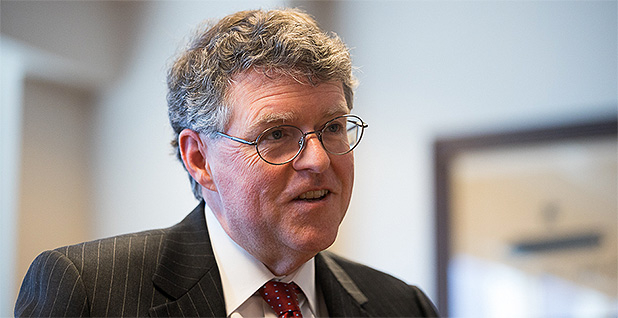 Federal Energy Regulatory Commissioner Bernard McNamee announced yesterday he would step down from his position in September, a move that could hamstring the agency in an election year.

"Since I announced at our January meeting that I would not be seeking another term, I have continued to work diligently and tirelessly on the important work of the Commission," he said in a press release. "I will have more to say before I leave, but needless to say, I thank the Chairman, my fellow commissioners, my advisors and staff, the staff of the Commission, and all of the FERC community for their support and friendship."

McNamee, a Republican, has long expressed a desire to return to Richmond, Va., to spend more time with his family.

Though his term expired on June 30, he previously said he would not depart the commission if it would mean FERC could not continue operating with a working quorum. While President Trump last month nominated two new commissioners — Democrat Allison Clements and Republican Mark Christie — to the five-member panel, McNamee’s departure could spell trouble in an election year if the Senate cannot move quickly to confirm the nominees (E&E Daily, July 28).

If the commission lacks a quorum, it cannot greenlight new infrastructure projects or approve tariff changes to the wholesale energy markets it regulates.

There were likewise only three commissioners heading into the 2016 election. When Trump designated former Democratic Commissioner Cheryl LaFleur as chair and Norman Bay stepped down, as is customary for an outgoing chair, FERC was left without a quorum. The agency was unable to move through backlogged cases until a quorum was restored six months later (Energywire, June 18).

Chatterjee has said, however, that he intends to finish out his term, which expires in June 2021.

"Commissioner McNamee’s announcement that he will be stepping down in a month’s time means FERC will be operating with only three commissioners as opposed to five. This was not the intention of Congress when the Commission was created," he said in a statement. "I am hopeful the Committee will act quickly to restore a fully seated FERC once we have the necessary paperwork."

While observers expect the confirmation process to move more swiftly than typical given the bipartisan nature of the nominations, the process can be a prolonged one. The nominees must be vetted, and once confirmed, there is an adjustment period at FERC.

"Even if [Clements and Christie] are confirmed quickly, they won’t be able to do their full work before the election," Casey Roberts, a senior attorney with the Sierra Club’s Environmental Law Program, said in a recent interview.

"Even though both of these [nominees] are extremely experienced and would be able to jump in quickly, there’s just not time," Roberts said. "For example, they have to go through ethics reviews."

During the Trump administration, the commission has operated without five members most of the time. Over the last four years, FERC only had a full five-member panel for about nine months, from December 2017 to August 2018. It also had a full panel for a couple of weeks in late 2018, through Chair Kevin McIntyre was sick during this time and McNamee had just been sworn in.

That nine-month period was interrupted when former Republican Commissioner Robert Powelson stepped down to take a job as president and CEO of the National Association of Water Companies. LaFleur had expressed interest in another term but was rebuffed by Senate Democratic leadership (Energywire, Jan. 24).

McNamee was confirmed by the Senate in 2018 by a 50-49 vote that fell along party lines. Before joining FERC, he served as executive director of the Energy Department’s Office of Policy. From May 2017 to February 2018, he was a political appointee in the DOE general counsel’s office.

Between his times at DOE, McNamee was a director at the Texas Public Policy Foundation, a conservative think tank. Prior to his first DOE term, McNamee was chief of staff for Texas Attorney General Ken Paxton (R) and a senior adviser to Sen. Ted Cruz (R-Texas) — both political positions (Energywire, March 9).

McNamee did not respond to requests for comment in time for publication. In his statement, he said he planned to take some time off and look for another job.