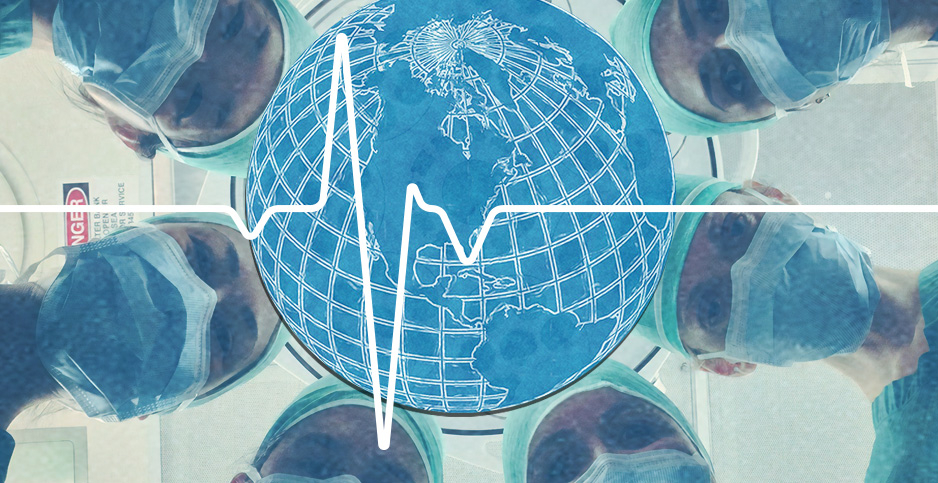 During her first year of medical school at the University of California, San Francisco, the wildfire smoke was so bad that Karly Hampshire had to wear an N95 mask to protect herself. The Camp Fire blaze miles away had created a haze on campus so thick that Hampshire couldn’t see the horizon.

But in class, the professors lecturing about the pulmonary system didn’t mention the harms of air pollution or wildfire smoke on lungs.

"There was such a very large disconnect between what we were learning in the classroom and what we were experiencing outside of it," she recalled.

The experience underscores why Hampshire is pushing medical schools and hospitals to include climate change in the curricula training the next generation of doctors. Hampshire is the co-founder of one group, the Planetary Health Report Card, that ranks schools on their climate education, but hundreds of medical students at schools nationwide have signed on to various similar initiatives.

Learning about the myriad ways climate change affects health, students like Hampshire say, is critical to preparing them for a warming world, where wildfire smoke could be clogging their patients’ lungs and dirty floodwaters could be infecting their patients’ skins.

"We are saying we are entering a different world and we need to know how to take care of our patients in these environments," said Sarah Hsu, a fourth-year medical student at Brown University who co-founded the group Medical Students for a Sustainable Future that pushes for the medical community to be more aware of climate’s impact on patients and of how the health care system’s emissions affect climate change.

Broadly speaking, medical students spend their first two years of training in the classroom, attending classes that focus on different organs and systems. There is a course about the lungs and pulmonary system, a class about the heart and cardiovascular system, and a class about the kidneys and renal system, for example, as well as classes on infectious diseases, genetics and anatomy.

Through these classes, medical students are expected to become encyclopedias of health, understanding how each organ and body system works, and how it is affected by outside factors like bacteria and viruses.

Integrating climate change into the curriculum should be simple, according to students at Medical Students for a Sustainable Future and the Planetary Health Report Card. They want lung lecturers to talk about how pollution contributes to asthma rates, and how climate change and heat can increase some of those pollutants, like ozone. They want cardiovascular classes to discuss heat and its effects on folks with preexisting heart conditions. And they want infectious disease classes to discuss how warming temperatures mean vector-borne diseases like Lyme disease are migrating farther north.

Some schools have already started to integrate climate change into their teaching.

Emory University School of Medicine approved a climate change curriculum in October 2019 at the urging of some of its students.

Fourth-year student Ben Rabin says he "pretty much" asked the school to teach the curriculum he wishes he had learned.

"I think environmental health tends to be sequestered within the public health sphere, and it is not talked about enough in medical education," he said.

Administrators at Emory, he said, had reservations about adding to an already exhausting course load but agreed to give it a shot since students were interested.

"There were no arguments about if it is important to teach students," he said.

Emory’s willingness to add climate change to the curriculum earned it top ranking in the Planetary Health Report Card, which reviews medical schools based not only on how they tackle climate change in their curricula but also how they handle issues of climate and health in their research, community outreach and campus sustainability.

Hampshire’s school, UCSF, is also working to add climate education to its curricula. She believes administrators there were more open to the idea because UCSF students are already required to take a class on the "social detriments of health," a term referring to structural barriers that affect racial and ethnic groups differently, including income, the quality of homes, pollution, racism and access to public transportation.

"We are already learning about how all of those factors can impact people’s health more than what happens in the hospital," Hampshire said. "So I don’t think you can’t argue climate change isn’t a health issue if it is going to impact where people live, their housing, and impact people unequally. It will basically exacerbate all of these things we already know create such bad health outcomes."

Now a fourth-year medical student who sees patients in the hospital, Hampshire says the impacts of climate change are everywhere. She has had to talk to patients whose nursing homes were evacuated during wildfires about where else they could go when they were discharged from the hospital, and has answered questions from pregnant patients about whether wildfire smoke would harm their babies.

An aspiring primary care physician in Providence, R.I., Hsu notes that medical students are already taught to take patient histories to learn about their health and help diagnose new problems. Those histories, she said, should include "environmental histories" to find out whether patients live in more polluted or hotter areas of the city that may contribute to their ailments.

"Equipping medical students to realize they have to understand the factors impacting their own communities can be really important to protecting the health of these patients," said Hsu.

This spring, Massachusetts General Hospital stood up its own Center for the Environment and Health with goals focusing on hospital sustainability and education. One of the center’s first initiatives is holding monthly grand rounds lectures focused explicitly on climate change.

The first lecture in June focused on extreme heat, a phenomenon that is becoming more common in Boston and changing the way health care workers need to think about their patients, center director Dr. Jonathan Slutzman said.

He recalled a patient he treated in early June who was mentally altered and came to the emergency room with a body temperature of 102 degrees Fahrenheit. The physician’s assistant who first assessed the patient reported that the man had a fever. But it was only after Slutzman spoke to the man’s wife that he realized the patient had spent much of the weekend outdoors in 90-degree heat and was actually suffering from heat stroke.

"It is ingrained in the emergency department’s culture here that if you see a high temperature, it’s a fever and we need to worry about sepsis," Slutzman said. "But now, we have to teach our staff to reconsider this and think, ‘OK, but what if it is heat exposure,’ because the treatments are very different."

Last year, a group of six doctors from across the country published a paper in Academic Medicine proposing a framework for adding climate change education to medical school and residency training.

The lead author, pediatrician Rebecca Philipsborn, said she routinely talks to patients and their families about climate change, baking the conversation into regular forms she must fill out to sign off on school sports participation, among other things.

"For my patients with asthma, we have asthma action plans, and creating those is a space to talk about how important it is to monitor air pollution, how heat can make some of that pollution worse, and how climate change will make all of that more common," said Philipsborn, who works at Emory in Atlanta and helped Rabin advocate for the university to add climate change to its curriculum.

But teaching recent medical school graduates how to have those conversations can be difficult "if students who are residents now didn’t hear one mention of climate change throughout their education," she said.

Philipsborn said she knows some doctors are worried that mentioning climate change to patients will invite accusations of making health care political. That’s a fear she understands, and says it isn’t critical for climate change to be mentioned in every patient discussion.

But, she says, "when you are teaching students, it is absolutely important."

"What we want from our medical students is not to just deliver reactive medicine, we want to also prevent harms to our patients, and when we think about climate change and how we need to adapt our health care and infrastructure and care delivery, that framework is a part of it," she said. "Medical students need to know all the root causes of a disease."