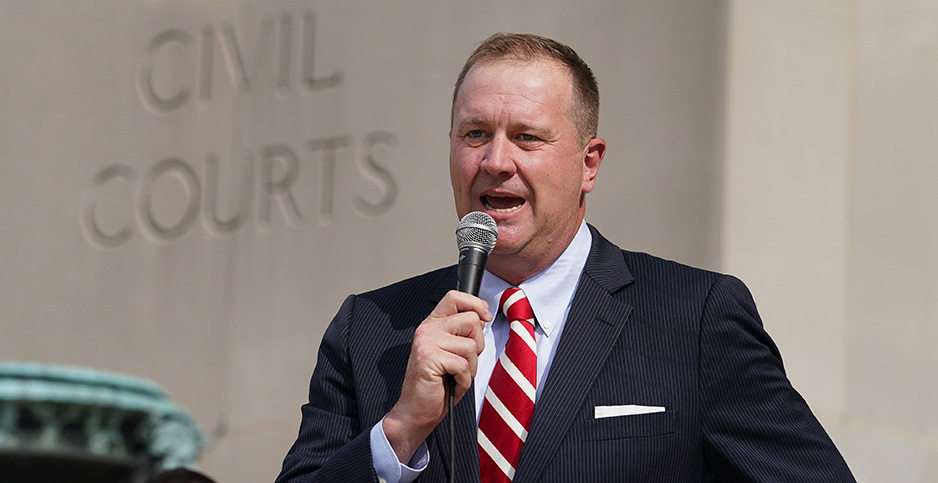 Missouri Attorney General Eric Schmitt (R) has challenged a number of President Biden's climate actions, including his decision to revoke a permit for the Keystone XL pipeline. Bill Greenblatt/UPI/Newscom

From Alabama to Wyoming, the top lawyers in red states are teaming up to sue the Biden administration over its efforts to slash planet-warming pollution.

In turn, Democratic attorneys general borrowed the same strategy under former President Trump to successfully challenge a host of rollbacks of environmental regulations (Greenwire, May 26, 2020).

"I’m not surprised at what we’re seeing early on," said Paul Nolette, chair of the political science department at Marquette University and author of the book "Federalism on Trial: State Attorneys General and National Policymaking in Contemporary America."

"This is something that really became prominent in the last few years of the Obama administration, when a new crop of Republican AGs that were elected in 2014 took a much more aggressive approach and started challenging a range of policies," Nolette said.

Republican attorneys general filed a total of 78 multistate lawsuits against the Obama administration, with an overall 60% success rate, according to data compiled by Nolette.

By contrast, Democratic attorneys general brought a total of 156 multistate lawsuits against the Trump administration, achieving a 78.5% win rate.

"The reason the Trump administration lost so much in court is because there was just rule after rule where procedural and statutory constraints were just thrown aside," said Bethany Davis Noll, executive director of the State Energy & Environmental Impact Center at the New York University School of Law.

While the State Impact Center is nonpartisan, it has worked with mostly Democratic attorneys general on environmental litigation, Noll acknowledged.

"Traditionally, agencies win in court around 70% of the time," she added. "I think it’s safe to bet that’s the kind of environment the Biden administration is entering in terms of challenges to its actions."

Eric Schmitt, 45, is considered a rising star in the Republican Party.

He was originally appointed Missouri’s attorney general in 2018 after the incumbent — conservative firebrand Josh Hawley — was elected to the U.S. Senate.

Schmitt has challenged a slew of Biden’s environmental undertakings, including the president’s decision to revoke a key permit for the Keystone XL oil pipeline (Energywire, March 18).

More recently, he led a coalition of 13 red states in suing over Biden’s executive order on updating the social cost of carbon and other greenhouse gases (E&E News PM, March 8).

Schmitt announced on March 24 that he was running for the U.S. Senate to succeed incumbent Republican Roy Blunt.

"The old joke is that AG means aspiring governor, and they’re running for other offices and such," Nolette said. "So there’s a lot of political messaging that goes into these lawsuits along with the legal aspect."

Chris Nuelle, a spokesman for Schmitt, rejected that notion.

"Those allegations are baseless and unfounded," Nuelle said in an email to E&E News, adding, "Attorney General Schmitt is dedicated to protecting Missourians from federal government overreach, and that’s why he filed this suit."

First elected Louisiana’s attorney general in 2015, Jeff Landry previously served in the U.S. House from 2011 to 2013.

As a member of Congress, Landry was a vocal advocate for the oil and gas industry, criticizing Obama as "anti-oil" in a 2012 interview.

The 50-year-old has other connections to energy and the environment, too: He grew up during Louisiana’s oil bust and majored in environmental and sustainable resources at the University of Southwestern Louisiana.

Last month, Landry led a separate coalition of 10 red states in suing over Biden’s plans to raise the social cost of carbon, a key metric that assigns a dollar value to the harms of greenhouse gas emissions (Climatewire, April 23).

"I led this lawsuit because, if left unchecked, Joe Biden could use his unconstitutional executive fiat and its destructive cost structure to destroy the American economy and way of life," Landry said in an emailed statement to E&E News.

"With the stroke of his pen, Joe Biden has repeatedly bypassed Congress and ignored the Constitution," he added. "I will continue to vigorously defend the rule of law from government overreach and unconstitutional attacks."

Another attorney general from an energy-rich state, Patrick Morrisey earned a reputation as a top courtroom foe of Obama’s environmental rules.

In 2015, Morrisey led a coalition of 24 states in suing over the Clean Power Plan. The Supreme Court ultimately stayed the regulation before it could take effect.

The Trump administration in 2019 issued the Affordable Clean Energy rule, which took a much narrower view of EPA’s authority to regulate power plant emissions.

But on Jan. 19 — one day before Biden’s inauguration — the U.S. Court of Appeals for the District of Columbia Circuit tossed out the Trump administration rule as unlawful (Climatewire, Jan. 20).

"The D.C. Circuit’s decision analyzing the EPA’s authority is incorrect, and we thought it was imperative to pull together a broad, national group to say the EPA doesn’t have unlimited ability to transform the American economy," Morrisey said in an emailed statement to E&E News.

"This is a particularly important issue to resolve in light of President Biden’s radical and transformational climate proposal," he continued. "Decisions about climate change should be for Congress to debate and for the President to resolve. One cannot just put the EPA bureaucrats in charge of this."

Formerly legal counsel to then-Senate Majority Leader Mitch McConnell (R-Ky.), Daniel Cameron was elected attorney general in 2019. He is the first Black American to hold the office, and the first Republican since 1944.

Cameron, 35, entered the political spotlight last year, when he spoke at the Republican National Convention and was placed on Trump’s short list of potential Supreme Court nominees.

His time as attorney general has been marked by controversy. Cameron faced backlash last year over his handling of the Breonna Taylor case, in which a Black woman was fatally shot by police officers during a botched drug raid in Louisville.

Cameron joined the Louisiana-led lawsuit over Biden’s executive order on the social cost of carbon, saying in a statement that the order "targets industries like coal and manufacturing, which are essential to Kentucky’s economy and future economic growth."

The 54-year-old filed an April 12 lawsuit over the Biden administration’s decision to halt construction of a wall along the U.S.-Mexico border.

The complaint asserts that the Biden administration violated the National Environmental Policy Act by neglecting to study how an influx of immigrants could increase climate pollution.

"Migrants (like everyone else) need housing, infrastructure, hospitals, and schools. They drive cars, purchase goods, and use public parks and other facilities," the suit says. "Their actions also directly result in the release of pollutants, carbon dioxide and other greenhouse gases into the atmosphere, which directly affects air quality."

The complaint contains strong echoes of eco-fascism, an ideology that blames the demise of the environment on overpopulation and immigration, HuffPost previously reported.

A spokesperson for Brnovich didn’t respond to a request for comment in time for publication.