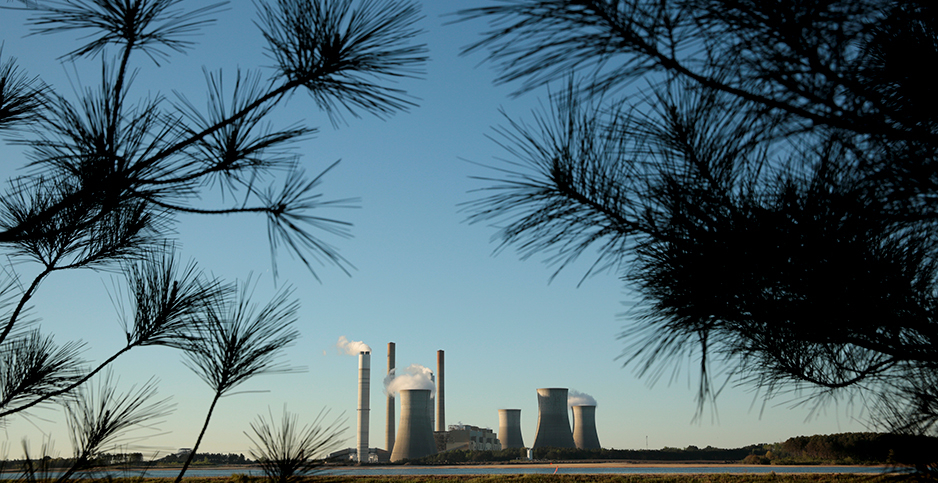 The Robert W. Scherer Power Plant in Juliette, Ga., is one of the largest emitting coal facilities in the United States. Christopher Aluka Berry/REUTERS/Newscom

And yet for all the industry’s woes, coal plants remained the largest individual sources of CO2 in America. Even as many plants struggled, big utilities continued to churn out electricity and pump carbon dioxide into the atmosphere.

But many of the country’s largest plants continued to run more than half the year. Those are the plants that tend to be found on this list: the top 10 largest carbon emitters in America.

Together, these plants generated 152 million metric tons of carbon dioxide last year, or almost 9% of U.S. power sector emissions. That’s the amount of greenhouse gases that would be created by 33 million cars over a year.

The top 10 list is telling in several ways. First, it represents a measure of economic health. Just one plant on this list is scheduled for retirement over the next decade, and it’s a partial shutdown. There is also only one plant with a usage rate below 50%, the threshold below which coal plants tend to face economic difficulty.

America’s top emitters tend to be relatively young coal plants. Most were built in the 1970s and ’80s, noted Emily Grubert, a professor who studies the power sector at the Georgia Institute of Technology.

Costa Samaras, a professor who studies the power sector at Carnegie Mellon University, noted that emissions from power plants have trended down in recent decades. But continued emissions from large coal plants represent a long-term challenge for U.S. climate policy. America’s top emitters in 2019 are still running much of the time, despite record-low natural gas prices and stiff competition from renewables, he said.

Now for the list. Each heading includes several characteristics of each plant, beginning with their emissions rank compared with other coal facilities in the U.S. Then comes the plant’s owner, the location of the facility, its emissions in 2019, followed by its emissions over the last decade. We also include the plant’s capacity factor, or the amount of time it ran in 2019.

Monroe is the lone DTE coal plant not destined for the scrap heap. Michigan regulators recently approved a plan to keep the facility open until 2040. In 2019, Monroe accounted for 39% of DTE’s power generation and about half of its CO2 emissions.

Colstrip is the star of a Western soap opera about the future of the region’s power grid. The plant has long sent electricity to consumers in the Pacific Northwest, but utilities there now want to cut ties as lawmakers in Washington state and Oregon seek to phase down the use of coal and reduce emissions. The local Montana utility, Northwestern Energy, is attempting to buy their stake while the plant’s operator, Talen Energy, has signaled that it’s open to replacing its colleagues from the Pacific Northwest.

In the meantime, two of Colstrip’s four units closed this year as part of a settlement with environmental groups. Those units represented 27% of Colstrip’s emissions last year. So this might be the last time Colstrip makes the top 10 list, but it is likely to remain a significant emitter for at least several years.

Ameren has committed to cutting emissions 80% of 2005 levels by 2050. But like many utilities with climate goals on this list, Ameren does not plan to retire its largest emitter for decades to come. Two of Labadie’s four units will close in 2036, according to the utility’s most recent integrated resource plan. The two remaining units are slated to be shut down in 2042. Labadie represented 58% of Ameren’s emissions last year.

Martin Lake has survived Texas’ historically low natural gas prices and a large injection of wind in recent years, both of which are positive signs for the plant’s future. The Electric Reliability Council of Texas, the grid operator serving much of Texas, has slim reserve margins after Vistra Energy closed three large coal plants in the state. But with a lot of wind and solar in the Texas pipeline, the electricity market remains difficult to predict.

Prairie State is the newest plant on this list, having rumbled online in 2012. The plant experienced a difficult start to life, including questions over its construction costs and an accident that damaged one of its units in 2014. But its usage has climbed steadily in the years since. And as Prairie State’s usage has risen, so, too, has its CO2 emissions.

W.A. Parish is the largest coal plant west of the Mississippi River. It is perhaps best known as home to the Petra Nova carbon capture and sequestration project, which captures 90% of emissions off a 240-MW slipstream. Still, Petra Nova only covers part of the emissions for one of Parish’s eight units. The plant’s four coal and four gas units make it one of the largest emitters in America.

Gas prices spiked in the first decade of the 21st century, prompting the last wave of coal plant construction in the United States. Prairie State was one of the last big coal plants to come online. Oak Grove was another. Its two units rumbled to life in 2010 and 2011. At 1,665 MW, it’s smaller than its counterparts on this list. But it ran more than 80% of the year between 2015 and 2019, which accounts for its spot here.