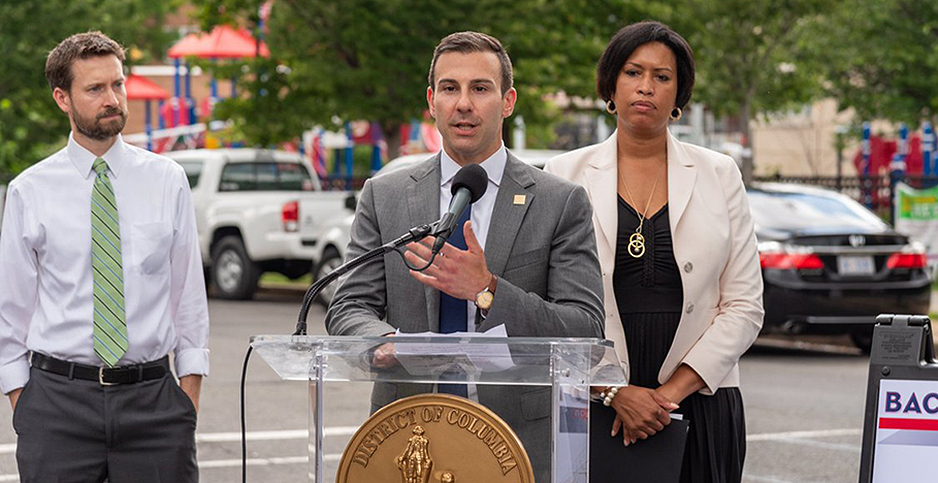 Jeff Marootian spent the Trump years helping to shape one of the most aggressive state-level plans to address transportation and its climate footprint.

Now, to the delight of climate activists, the former Washington official will be doing similar work for President Biden. They say Marootian — the newly hired special assistant to the president for climate and science agency personnel — will help shape climate policy that can endure, even if the next president is more hostile to greenhouse gas reduction.

As director of Washington’s District Department of Transportation (DDOT), Marootian helped develop a multistate compact — the Transportation and Climate Initiative. It’s designed to cut diesel and gasoline emissions, and to steer revenue from a cap-and-trade system to environmental justice communities.

Marootian’s experience in Washington shows that he knows how to structure climate policy that can succeed in spite of hostile political pressure, said Morgan Folger, director of clean car communities for Environment America. She said Marootian knows what works for state and local leaders with diverse political backgrounds.

"What we’ve seen over the past four years is that climate action didn’t just stop because there was a climate denier in the White House," she said. "Having somebody who understands how local cities and states can address the problem and be able to advocate for more funding to go to those places is super critical."

At DDOT, Marootian led a team that oversaw the development of several climate- or transportation-related initiatives, such as new bike lanes and the construction of the $500 million Frederick Douglass Memorial Bridge — the largest public transportation construction project in the city’s history. He also experimented with closing busy commercial streets to demonstrate how car-free zones could transform the city.

"During his time at the District Department of Transportation he has worked tirelessly to make our roads and sidewalks safer and more efficient, and to build a transportation network that not only meets our needs today but looks ahead to the future," said District of Columbia Mayor Muriel Bowser in a statement.

His most notable climate initiative was the development of the Transportation and Climate Initiative, in which the District of Columbia — along with Connecticut, Massachusetts and Rhode Island — committed to reducing gas and diesel emissions 26% by 2032. The effort aims to slash emissions of carbon dioxide, methane and nitrous oxide. It’s also flexible, so that other states that participated in its development, including New York and Maryland, can join later.

"We have ambitious goals for mobility, for equity and for climate," Marootian told reporters in December, when the plan was announced.

The initiative is effectively a cap-and-trade system, in which polluters are forced to pay for the climate costs of their products. It will require that large fuel distributors buy pollution allowances, with a shrinking number of those allowances available every year.

The program is expected to raise more than $3 billion across the region by 2032; the funding will be used to pay for green initiatives such as new fleets of electric buses, walking and biking lanes, electric vehicle charging stations, and other green initiatives.

The yearslong effort to create the program was initially criticized by environmental justice advocates because cap-and-trade programs can allow vulnerable communities to face years of continued pollution.

In response, Marootian and those developing the program reworked it so about 35% of the benefits of the program would go to the environmental justice communities that bear the brunt of air and industrial pollution. That closely mirrors the 40% of benefits the Biden administration has promised to front-line communities.

The Transportation and Climate Initiative shows that there is momentum in decarbonizing transportation outside the federal government, said Alli Gold Roberts, director of state policy for the sustainability advocacy group Ceres. Marootian recognizes that dynamic, and his new perch inside the White House can help him develop outside-the-Beltway policies that could outlast a future administration more hostile to climate work, she said.

"Hopefully, four years from now, the train will already have left the station on electric vehicles, particularly as we look at public transit and the growing interest in electric buses, increased investment in public transit," she said.

Marootian also brings with him experience working in the federal government, said Beth Osborne, who worked with Marootian during the Obama administration when she was the acting assistant secretary for transportation policy.

At the U.S. Department of Transportation, Marootian was an organized and dependable colleague who focused on improving the agency’s own carbon footprint, she said. He is aware of the nuances of reducing carbon pollution in the transportation sector and how it must be treated differently than with utilities, Osborne said.

What’s more, Marootian understands the need to recognize that vulnerable and low-income communities bear the brunt of pollution from the transportation sector, all without seeing the same level of advantages and access to opportunities, said Osborne, who is now director of the advocacy group Transportation for America.

"Having someone who comes from DOT and understands that side and understands that it’s not just about telling private industry how to do their job better, but having the government look in the mirror and consider its own investment patterns and its role, that’s very powerful," she said.