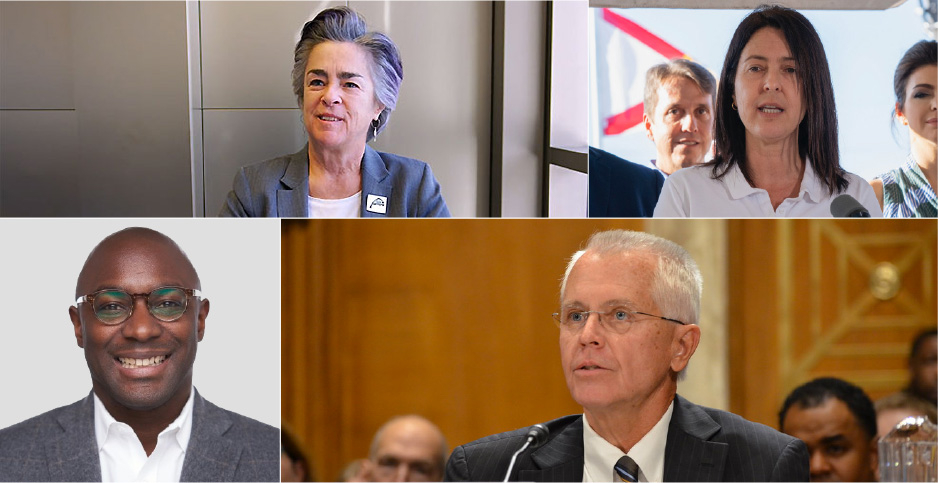 With expertise including crafting WOTUS; tackling the Flint, Mich., water crisis; restoring the Everglades; and curbing coal plant pollution, the experts may be appointed to high-level positions after the new administration ramps up and may shape policy going forward.

One former Obama-era EPA official expected to be highly influential in water policy as part of the agency’s transition team is Ken Kopocis. He led the agency’s water office after facing a drawn-out confirmation fight and helped write the 2015 WOTUS, or Waters of the U.S., rule revisions, as well as regulations for wastewater from coal-fired power plants.

The Trump administration rolled back both of those rules, but Biden is widely expected to reverse those regulatory rollbacks affecting stream and wetland protections, drinking water contamination, and the permitting of controversial energy and flood projects (Greenwire, Nov. 17).

Shapiro, who worked under Kopocis, said he expects Kopocis to play a "very big" role in crafting transition documents and policy recommendations when it comes to water, given he spent his career in government and on Capitol Hill and has a "huge reservoir of expertise."

Other former Obama officials on the EPA team likely to influence water policy include Luseni Pieh, who was a deputy EPA chief of staff from 2015 to 2017. Pieh advised then-Administrator Gina McCarthy and worked on the Flint water crisis, pesticide exposure, polychlorinated biphenyls and the agency’s enforcement of the Civil Rights Act.

Cynthia Giles, who led the agency’s enforcement office under President Obama and worked on some of the biggest environmental enforcement cases in history — including the Deepwater Horizon oil spill — has deep expertise in enforcement and is also expected to play a critical role in prioritizing policy goals for Biden.

At Interior, former Obama officials and conservationists are also overseeing the transition, bringing expertise including on tribal water rights, on Everglades restoration and a focus on national parks.

But sources said they’re not expecting a repeat of Obama policies. "They won’t say, ‘Let’s go back to where we were then,’" said Shapiro. "They’ve done a lot of their own thinking and have gotten their own experience to build on."

Instead, transition officials like Kopocis and Giles will provide intimate knowledge of the agency while identifying and recommending targeted changes to address the Trump administration’s rollbacks.

"Nobody wants to go back to where we were," said Betsy Southerland, former director of the water office’s Office of Science and Technology who worked alongside Kopocis. "What they want to do is take a surgical look at what needs to be done to advance the agency."

Here’s a look at the president-elect’s team and its water expertise:

Kopocis, a law professor at American University working on Biden’s EPA transition team, could offer the incoming administration insight into tackling thorny policy issues at EPA and on Capitol Hill, as well as planning for confirmation fights — his own lasted years and was never resolved.

After Kopocis served on the Hill for nearly three decades, Obama nominated him to lead EPA’s Office of Water in 2011. But Senate Republicans opposed to his work on a key Clean Water Act rule blocked his nomination for years. He ended up serving as a senior adviser in the water office before moving into the acting deputy assistant administrator position before stepping down in 2015 (E&E Daily, Oct. 27, 2015).

Kopocis also oversaw the finalization of the first new limits in 30 years on toxic discharges from coal-fired power plants and a landmark approach to cleaning up the Chesapeake Bay.

Pieh, a consultant and adviser in Los Angeles, is helping head up Biden’s EPA transition team.

He recently served as the acting CEO and chief operating officer of River LA, a group focused on beautifying and integrating natural infrastructure along the 51-mile Los Angeles River, including construction of the N. Atwater Bridge.

Pieh served as deputy chief of staff for programs and strategic initiatives at EPA from January 2015 to January 2017. Before that, he was the senior director for Cabinet affairs covering EPA and the departments of Energy, the Interior, Transportation and Agriculture. He had previously worked under McCarthy as EPA’s liaison to the White House.

Before his first stint at EPA from 2013 to 2014, Pieh was an attorney at the Milwaukee law firm Gonzalez Saggio & Harlan LLP, where he focused on environmental issues. He’s an Ann Arbor, Mich., native with a Master of Law degree in natural resources and environmental law and policy from the University of Denver, a law degree from Indiana University, and a bachelor’s degree from Michigan State University (Greenwire, Jan. 21, 2015).

Giles, now a guest fellow at Harvard University Law School’s environment and energy law program, is seen as a critical part of the EPA transition team with deep knowledge of agency operations and experience enforcing and litigating the Clean Water Act.

She led EPA’s enforcement office for the Obama administration and brought charges against Duke Energy Corp. for violations at the company’s retired Dan River coal-fired power plant, where a broken pipe under an ash impoundment sent more than 30,000 tons of waste into the river.

According to her online biography, Giles prosecuted civil violators of environmental laws as an assistant U.S. attorney in Philadelphia, led the water protection program for the commonwealth of Massachusetts, served as the director of enforcement coordination for EPA Region 3 and was the director of the Conservation Law Foundation’s Advocacy Center in Rhode Island.

She has a bachelor’s degree from Cornell University; a law degree from the University of California, Berkeley; and a master’s degree in public administration from the Harvard Kennedy School of Government.

A longtime Everglades restoration advocate and Obama’s federal point person for restoration of the region, Estenoz is now a member of Biden’s Interior transition team.

She has experience not only on thorny water issues in Florida, but also held a top post at Interior under the Obama administration and once served as director at the National Parks Conservation Association. Estenoz is currently chief operating officer and vice president of policy at the powerful nonprofit Everglades Foundation.

In 2010, then-Interior Secretary Ken Salazar appointed Estenoz to be the department’s director of Everglades restoration initiatives. There, she developed policy for the Everglades and coordinated work of the National Park Service, Fish and Wildlife Service, and U.S. Geological Survey.

At the agency, Estenoz was instrumental in advancing a 2.6-mile bridge on the Tamiami Trail to increase the flow of fresh water south through the Everglades, according to her online bio. She also advised several secretaries of the Interior on Everglades policy and legislation, including the Central Everglades Planning Project.

Trujillo is also a member of the Interior transition team. She is a leading expert on the Colorado River, which continues to face persistent drought conditions and will likely pose a regulatory challenge to the Biden administration.

She has also led the Colorado River Sustainability Campaign, a multimillion-dollar effort that coordinates and funds a variety of environmental advocacy groups in the basin.

The effort is backed by the Washington-based New Venture Fund, which does not disclose its donors. An April 2019 investigation by E&E News found that nearly half of the funding came from the Walton Family Foundation, the nonprofit established by heirs to the Walmart fortune (Greenwire, April 18, 2019).