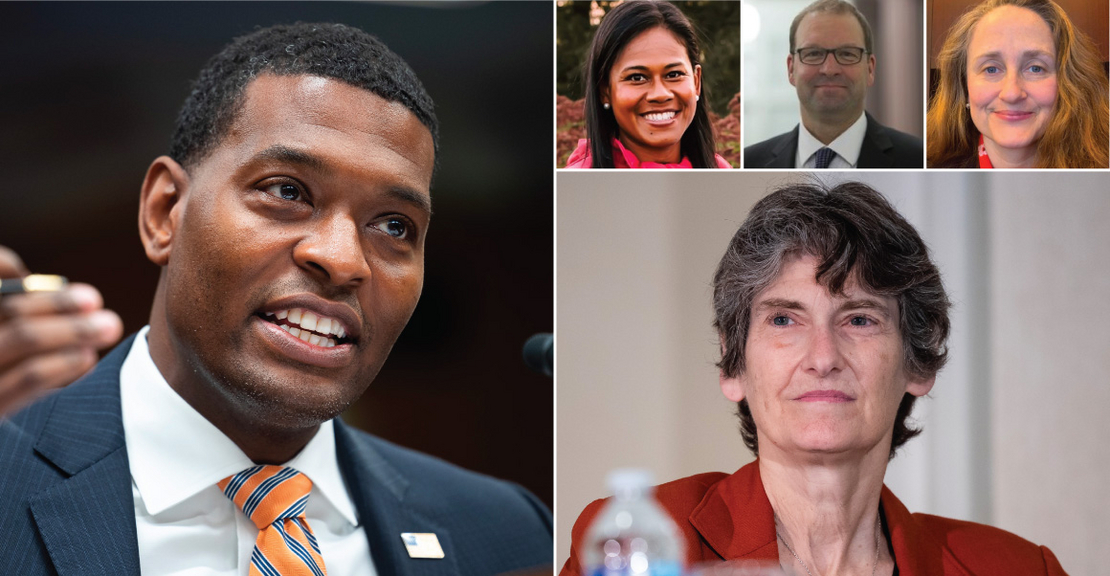 Most weekday mornings at 8:30, EPA Administrator Michael Regan huddles with his closest advisers to strategize how to fight climate change and champion environmental justice, among other Biden administration priorities.

The group includes his chief of staff, the agency’s second-in-command as well as top policy and communications aides, most of whom have been working together since the start of the administration.

Regan and his team have been working at a frantic pace to pull back Trump-era policies and implement the Biden administration’s agenda on everything from climate change rules to chemical standards. They will also help manage an influx of billions of dollars into the agency from last year’s infrastructure law and are gearing up to handle funds stemming from the climate spending package, which President Joe Biden will sign into law today.

The administrator’s calendars, obtained by E&E News under the Freedom of Information Act, offer details about the advisers working with Regan behind the scenes. So far, the agency has released Regan’s calendars through April.

At Regan’s morning meeting — “Video-call: Check-in,” as it’s labeled on his calendars — the agency’s leadership gathers to discuss updates to EPA business and issues coming up in the day or week ahead, EPA spokesperson Tim Carroll told E&E News.

“During the meeting, each senior leader has an opportunity to share an update from their office, ask questions of other senior leaders and share highlights of agency work with Administrator Regan,” Carroll said.

He added, “The check-in is also an opportunity for EPA senior leaders to hear directly from the administrator on critical topics, ensuring a regular and open line of communication as we work to advance our mission of protecting human health and the environment.”

The staff gathering is typically one of Regan’s first meetings each day. Some aides come in person while others attend virtually, as indicated by the calendars.

Kendra Barkoff Lamy was in several of Regan’s “check-in” meetings. She served as a senior adviser to the administrator before leaving the agency earlier this year.

“I found the administrator is a convener of his staff, and it’s a chance for him to listen to his senior team. He provides feedback and gives them direction,” Barkoff Lamy, now a managing director at public affairs firm SKDK, told E&E News. “The conversations were always collaborative and solutions-focused. Everyone feels empowered to contribute.”

Here’s a look at who’s often in the morning meetings:

A veteran of the Obama administration and the Senate, Utech has been Regan’s top staffer since day one of the Biden administration. In addition to joining the regular check-ins, Utech is a regular participant in other meetings with his boss, the calendars show. For example, he participated in discussions on issues such as infrastructure and perchlorate, and was part of video calls with White House climate officials Gina McCarthy and Ali Zaidi in March.

Blythers, another fixture in Regan’s morning meetings, joined EPA in January 2021 with a background in politics and climate advocacy. He was political director at End Citizens United/Let America Vote, a group that aims to limit the influence of money in politics and protect voting rights. He also previously worked for Kamala Harris’ 2020 presidential campaign and at the Climate Action Campaign.

Cassady joined EPA after working on climate and energy issues in the House and at the Center for American Progress. She has participated in EPA meetings this year on the renewable fuel standard, talks about chemical regulations and infrastructure discussions, Regan’s calendars show.

Regan’s lieutenant, McCabe, was a senior official in the Obama EPA before she returned for a second stint during the Biden administration. In addition to the morning check-ins with Regan, McCabe and the EPA administrator have weekly one-on-one meetings, the calendars show. McCabe also participated in biweekly video calls with Regan and White House officials McCarthy and Zaidi.

Prieto is EPA’s top lawyer and has already played a part in some of this administration’s epic legal battles, including the Supreme Court’s West Virginia v. EPA decision that will constrain the agency’s climate authority. He is another Obama administration veteran now serving at the agency, having been general counsel for the Department of Agriculture and at the Justice Department’s Environment and Natural Resources Division. His office will be key going forward in advising Regan and other top EPA officials on what the agency can do under the law.

Enobakhare leads EPA’s public engagement office and is a vital link to the outside world for the agency. She has helped coordinate Regan’s “Journey to Justice” tour and has prior EPA experience, having served as deputy in the public engagement office during the Obama administration. Enobakhare is often listed as an attendee for briefings on Regan’s public events and travel, according to the calendars.

Arroyo is the head of EPA’s policy shop. She was part of the first wave of Biden appointees to arrive at the agency, coming from the Georgetown Climate Center. In charge of EPA’s regulatory work, Arroyo is a key cog in the agency’s machinery and appears in meetings on Regan’s calendars dealing with various agency guidance and rules.

Hamilton is EPA’s top public affairs official, and her office handles all communications by the agency. She has held several posts, including chief spokesperson for George Washington University and vice president at the Center for American Progress. Regan’s calendars show Hamilton attending a number of meetings, including those preparing for press interviews.

Niebling leads EPA’s hub for interacting with Congress as well as state and local governments. He has Capitol Hill experience, having been legislative counsel to then-Sen. Harris (D-Calif.) and earlier an aide to former Sen. Ted Kaufman (D-Del.) and then-Sen. Biden (D-Del.). Niebling also served at EPA during the Obama administration. He often appears on Regan’s calendars preparing for congressional hearings and meetings with lawmakers.

Lucey served with Regan at the North Carolina Department of Environmental Quality, which the latter led as secretary. Lucey started at EPA as a special assistant to the administrator last year. He has moved to other positions at the agency, including senior adviser for strategy and implementation, and is now handling intergovernmental relations.

Lance also came to EPA last year from the North Carolina DEQ. She had served there as a special assistant to Regan when he was secretary. Regan’s calendars show Lance frequently in meetings preparing for the administrator’s travel.

Harney is considered part of Regan’s inner circle as a senior aide for the administrator. She joined EPA last year as the deputy head of its public affairs office before taking on the adviser role. Harney has top-level public affairs experience, including having led communications for Massachusetts Treasurer Deborah Goldberg and as the traveling press secretary for Sen. Elizabeth Warren’s (D-Mass.) 2012 Senate campaign.