Meet EPA’s team behind the next power plant rule 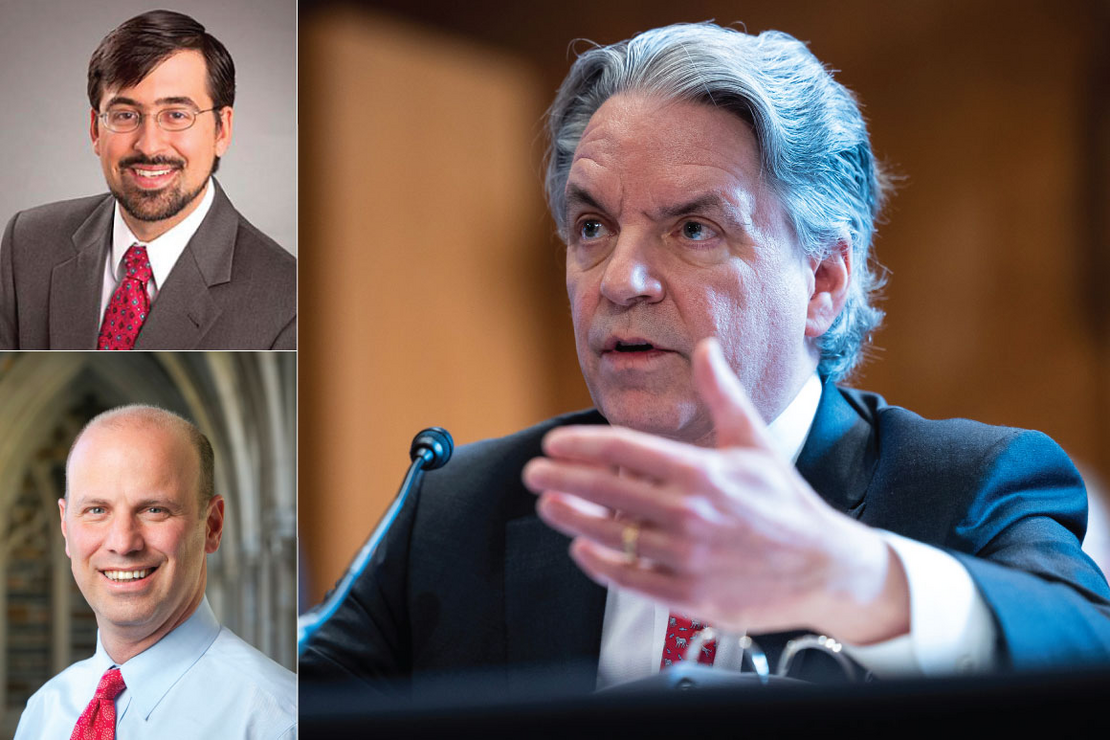 In the wake of the Supreme Court curbing its power to combat climate change, EPA will turn to a mix of career staff and political appointees — many with decades of experience in environmental law and policy — to draft coming regulations for fossil fuel-burning power plants.

The task is tricky. Agency officials will have to craft narrow yet powerful rules that will cut down on greenhouse gas emissions.

The mission is paramount. President Joe Biden has set high climate goals for the United States, which can only be reached if EPA develops legally sound, tough standards. It also will have to be third time’s the charm for the agency after seeing past efforts to govern power plants’ emissions come undone.

First was the Obama-era Clean Power Plan, which the Supreme Court stayed in 2016 and was repealed three years later under then-President Donald Trump. The Trump EPA replaced it with the Affordable Clean Energy rule, which was subsequently struck down in a court challenge the day before Biden took office (Energywire, Jan. 20, 2021).

Now under the yoke of the West Virginia v. EPA decision, EPA will have less room to maneuver on the regulatory front in the fight against global warming.

Bob Perciasepe, who led EPA’s air office during the Clinton administration and served as its deputy administrator under President Barack Obama, said multiple offices at the agency will help write the power plant rule, with dozens and dozens of staff serving in each of them.

“There will be a lot of hands in this,” Perciasepe, now a senior adviser for the Center for Climate and Energy Solutions, told E&E News. “They are the probably most qualified team you can put together.”

In the 6-3 opinion released last month, the high court barred EPA from pushing for industrywide electric “generation shifting” to reduce the use of coal as a power plant fuel source under Section 111(d) of the Clean Air Act (Greenwire, June 30). While agency officials are still sifting through the ramifications, some legal observers still see readily available opportunities for shrinking the industry’s carbon footprint.

“To the extent EPA’s goal is to accelerate the move away from coal, I don’t even think it needs 111(d) to do that,” Nathan Richardson, a University of South Carolina law professor, said last week at an online forum hosted by Resources for the Future, a think tank where he serves as a fellow. “I think it just increases standards on conventional pollutants, which we all know coal plants are some of the largest emitters of, along with transportation.”

But Richardson and other attorneys foresee other potentially far-reaching consequences from the court’s decision, both for other agencies’ ability to wade into climate regulation and for EPA’s ability to interpret expansively its authority under the Clean Air Act.

To limit greenhouse gas emissions from the cement industry, “we need to change how we’re going to build buildings,” he said. “How is EPA supposed to do that if it can’t do anything cross-sector?”

For now, the agency is shying away from discussing specifics. EPA spokesperson Tim Carroll told E&E News the agency “is committed to building on the lessons of our prior efforts in this area and engaging a broad range of stakeholders.”

Regulators there will be working through the rest of this year to assemble proposals to deal with carbon emissions from both new and existing power plants, Carroll said, with proposed rulemaking scheduled for early 2023.

In a statement to E&E News this week, acting EPA air chief Joe Goffman added that several options remain on the table and will be screened in light of the court’s decision (Climatewire, July 13).

While any such proposals will go through a standard interagency review process overseen by the Office of Information and Regulatory Affairs, the extent of potential involvement of other top officials is unclear.

While heading EPA in 2015, Gina McCarthy, now Biden’s national climate adviser, was responsible for the rollout of the Clean Power Plan. White House press officials did not respond to emails asking what steps were being taken on their end to address the Supreme Court ruling.

One meeting — held at EPA’s Research Triangle Park, N.C., campus to talk about the Clean Air Act and “Technology Options” for “Existing Coal-fired EGUs,” otherwise known as power plants — had more than 80 agency staff listed as attendees, including Regan marked as there in person and others joining virtually, like Janet McCabe, EPA’s second-in-command.

McCabe is one of several EPA officials who helped write the Clean Power Plan, along with Goffman, now leading the air office. Career staffers who helped put together that regulation as well as the ACE rule are also listed on Regan’s calendar in meetings focused on power plants.

“Those will be the principal offices,” the former EPA official told E&E News. “Those are the three big heavyweights.”

Office of Air and Radiation

In an email to staff after the Supreme Court’s ruling, Regan said EPA’s team, led by the air office, was ready to move forward. He added he knows the agency has “the best and the brightest” working on new Clean Air Act rules.

Profeta is listed as an attendee in several meetings on Regan’s calendar, including one this past March to discuss the power sector.

Profeta is serving at EPA as special counsel for the power sector under an Intergovernmental Personnel Act assignment from Duke, Carroll said, adding that Profeta’s assignment is scheduled to end Aug. 1 but a one-year extension is being processed.

An air office component, the Office of Air Quality Planning and Standards, is expected to be key in developing the power plant rule.

The air quality office “will lead the development of these rules, working with a robust intra-agency workgroup and following all [Office of Management and Budget] guidelines for interagency review,” Carroll told E&E News.

Peter Tsirigotis is OAQPS’s director, while Mike Koerber is its deputy director. Kevin Culligan, a senior policy director in the office, has been listed in meetings with Regan too.

Its Sector Policies and Programs Division, led by Penny Lassiter, has been vital for past climate rules as well.

The Energy Strategies Group, part of EPA’s air quality office, is expected to be influential too. Nick Hutson, its group leader, and Nicholas Swanson, an environmental engineer there, are listed as agency contacts on a regulatory notice for the rule.

EPA can also draw on the Office of Atmospheric Programs, which addresses climate change, when writing up the rule. Chris Grundler leads the office and Rona Birnbaum is acting director of its Clean Air Markets Division, while Paul Gunning heads up its Climate Change Division.

EPA also has a Lead Region Process where a regional office is assigned to a program counterpart in headquarters to “synthesize” concerns of the agency’s 10 regions into a “regional view” for rulemaking decisions.

EPA’s New England branch — Region 1, its main office in Boston — has been paired with the air office this year and next, so it’s likely it will have a say in the power plant rule.

In January, the Biden administration filed a brief in the West Virginia v. EPA case. Almost a dozen EPA lawyers signed on, including Jeffrey Prieto, the agency’s general counsel.

In 2018, then-EPA Administrator Andrew Wheeler had requested that Srinivasan’s hiring as head of the air law office move forward, which it eventually did more than a year later. Wheeler cited the agency attorney’s work on the ACE rule in his request, according to records obtained under FOIA (Greenwire, Jan. 10, 2020).

EPA’s lawyers will help vet the power plant regulation as it moves along the rulemaking process.

“Yes, certainly on advising on how the program office should view its authority after the Supreme Court decision,” an industry lawyer told E&E News. “OGC never likes to be in the lead, but they will be playing an active role and will be asked to assess the legal viability of the policies under consideration.”

Some serving in EPA’s law office have experience suing the agency over climate rules, such as Melissa Hoffer, the principal deputy general counsel, when she served in the Massachusetts Office of Attorney General.

The policy shop also has the National Center for Environmental Economics, staffed with economists analyzing the costs and benefits of proposed rules. Al McGartland is its director.

Others in the policy shop are expected to be involved as well.

The Office of Regulatory Policy and Management handles the rulemaking process at EPA and will likely have that role for the climate regulation. William Nickerson is its director.

The power plant rule is a consequential undertaking for EPA, and some anticipate the White House will closely monitor its progress. In addition, the administrator’s office is expected to be active in the regulation’s drafting.

“A rule of this magnitude is going to be signed by the administrator,” another former EPA official told E&E News, referring to Regan. “Politically, optically, he has to.”