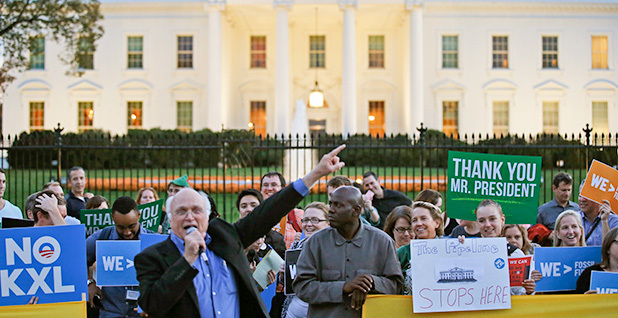 Gene Karpinski (left with microphone), president of the League of Conservation Voters, speaks during a gathering in front of the White House to celebrate President Obama's rejection of the Keystone XL pipeline last year. Photo courtesy of AP Images.

PHILADELPHIA — Gene Karpinski isn’t that tall. But it didn’t keep him off the basketball court in the late 1960s, when environmentalism was leaping skyward and his sneakers squeaked as a freshman player at Brown University.

Four decades later, with wooly white sideburns accounting for much of his hair, Karpinski is still working on environmental issues in his 11th year as president of the League of Conservation Voters. Today, he’ll achieve a new goal by speaking at the Democratic National Convention about climate change. He’ll be taller than the delegates below.

"It’s an honor, and it’s an important conversation to have," Karpinski said in one of several conversations with ClimateWire this week. He plans to use his speech to underscore Donald Trump’s assertion that global warming is a "hoax."

In some ways, Karpinski’s selection by the Clinton campaign is almost automatic. Under his leadership, the LCV Action Fund made its earliest presidential endorsement ever, in November 2015, before a single primary vote had been cast. That decision gave Clinton credibility on climate change as she faced Vermont Sen. Bernie Sanders and former Maryland Gov. Martin O’Malley, both of whom were promoting more aggressive policies than Clinton to reduce greenhouse gases.

So it was met with disbelief when Karpinski justified the endorsement by saying Clinton is the best candidate to challenge Trump. A Sanders spokesman, Michael Briggs, said at the time that LCV’s decision was made "on something other than merit." To make his point, he compared Sanders’ lifetime LCV score with Clinton’s — 95 to 82, respectively.

Karpinski’s assertions might be vindicated in the eyes of his supporters later tonight when Clinton officially accepts the Democratic nomination. That he’ll appear on the same stage, on the same day, isn’t a coincidence. LCV officials didn’t stand idly by; they made it happen.

Tiernan Sittenfeld, the group’s senior vice president for government affairs, was making the case to the Clinton campaign for weeks, or longer, that Karpinski is the right person to frame the contrasts between Clinton and Trump on climate change. Some of those conversations appear to have reached into Clinton’s inner circle. Asked if she talked with campaign chairman John Podesta about the speaking engagement, Sittenfeld said, "I spoke with a lot of people."

LCV’s "No. 1 priority" this year is electing Clinton to advance climate action, Sittenfeld said in an interview. She also indicated to the campaign that Karpinski would throw some punches. He’ll lambaste Trump for making comments that question the scientific findings related to rising temperatures. He will likely refer to him as a "denier" tonight.

"It would be really important for LCV to speak on a big stage why climate matters so much in this election," Sittenfeld said, describing her pitch.

Then last Thursday, she received a written invitation for Karpinski to speak. Soon after that, Karpinski received an email from Sittenfeld saying, "Woo hoo." They announced it publicly two days later.

Karpinski is a lifelong environmentalist. He attended high school in Connecticut, then graduated from Brown and Georgetown University Law Center. A few years after finishing school, he joined the Colorado Public Interest Research Group (PIRG). By 1984, he was executive director of PIRG’s national office in Washington, D.C. He led the group for more than 20 years. In 2006, Karpinski joined LCV.

Years earlier, Debbie Sease, now the Sierra Club’s policy director, remembers hearing from young environmentalists who left PIRG to work at the Sierra Club about the lessons that Karpinski would recite on persuasive speaking.

"They all said they were trained by Gene," Sease said.

On Tuesday, he did just that. Karpinski climbed onto a stage and told several hundred activists, lawmakers and environmental leaders attending a reception that now is the time to leverage climate change as an electoral asset for Clinton. He thanked each member of Congress in attendance, by name, and said, "The stakes have never been higher."

Not everyone subscribes to Karpinski’s speaking methods. Carol Browner, the former administrator of U.S. EPA under President Bill Clinton and a climate adviser to President Obama, shrinks from the idea of addressing a convention. "Not for me," she said, edging away from a reporter.

For Karpinski, it’s an upgraded version of his daily routine. He is regularly seen in the hallways of the Capitol, waiting for senators to emerge through doorways or come off the floor, so he can sprinkle an idea or two in their ear. And though it’s not uncommon for environmentalists to address Democratic conventions, the feeling this year is different, many observers say.

The polar positions of Clinton and Trump on climate are drawing sharper contrasts than in previous elections. It’s additionally elevated by Obama’s executive actions to cut emissions at power plants and by the Paris climate agreement, Democrats say.

"It’s much more front and center than it’s been in the past," said David Goldston, director of government affairs at the Natural Resources Defense Council.

Karpinski is also known to make friends by challenging their rivals. That happened earlier this month when LCV launched a $400,000 "persuasion" campaign against Sen. Rob Portman (R-Ohio). The group’s goal is to help elect Portman’s opponent, Democrat Ted Strickland, in the hope of giving Senate control back to Democrats next year. The group said Portman’s environmental record is at "rock bottom."

That raised questions about LCV’s strategy, since Portman is a moderate Republican who believes in climate change and is spearheading legislation on energy efficiency. If LCV attacks moderates, how can it find Republican partners for climate action?

Karpinski is unapologetic. He said this week that Portman’s opposition to the Clean Power Plan makes him a rival who can’t be worked with.

"Yeah, he had one bill," Karpinski said at an event here this week, apparently referring to Portman’s efficiency legislation. "If you’re not there on the Clean Power Plan, we’re not with you."

Karpinski has spoken positively about the positions taken on the Clean Power Plan by Republican Sens. Kelly Ayotte of New Hampshire and Susan Collins of Maine. The group has endorsed Collins.

Karpinski might convey sternness in his policy decisions, but he’s also apt to slap reporters on the back, nudge someone playfully with his elbow and give close colleagues a hug.

Washington Gov. Jay Inslee (D) calls him a friend. That illustrates more than just Karpinski’s knack for earning people’s trust. It also shows a deep connection to the political infrastructure in Washington, of which Clinton is an integral component.

Inslee credits Karpinski for helping him win his 1998 congressional election. He ran against Rep. Rick White, a two-term incumbent Republican. Karpinski and LCV put White on its "Dirty Dozen" list of polluters, even though it already listed 12 GOP lawmakers. White made it a baker’s dozen.

In the Northwest, Republicans will "pose" as environmentalists, Inslee said in an interview this week.

"LCV helps smoke them out, peel back the camouflage and let people know the truth," he said.