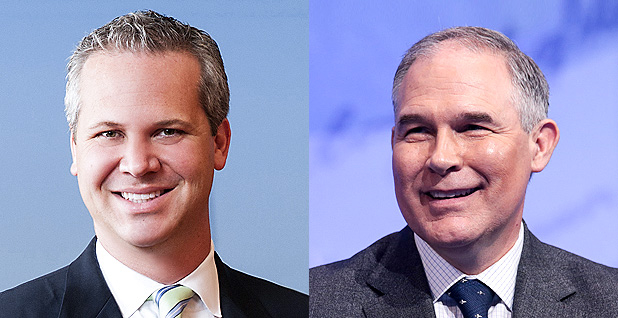 In the fall of 2015, Florida attorney Matt Leopold told a roomful of law students why the Obama administration’s landmark Clean Power Plan could face legal trouble.

The fate of the climate change regulation would rest in the hands of the courts "and, frankly, who’s going to be the next president of the United States, because every Republican candidate out there is pledging to repeal this rule," Leopold said at Florida State University.

Now, Leopold is likely to aid the Trump administration in unraveling it. He’s expected to be the nominee for U.S. EPA’s general counsel, two sources familiar with the nomination told E&E News.

If confirmed as the agency’s top lawyer, Leopold would be central to Administrator Scott Pruitt’s efforts to roll back Obama-era rules, including the Clean Power Plan and other high-profile initiatives the new administration has dubbed burdensome and overreaching.

Leopold is now an attorney at the Tallahassee, Fla., office of the law firm Carlton Fields. He was the chief lawyer at the Florida Department of Environmental Protection from 2013 until 2015, and worked in the Justice Department’s environment division from 2007 until 2013. At DOJ, he was on the BP Deepwater Horizon oil spill civil trial team, according to his LinkedIn profile.

Scott Fulton, who was EPA general counsel during the Obama administration, said the agency’s top lawyer will likely play a "pivotal role" in the Trump administration’s deregulatory efforts.

He said the general counsel stands to be tasked with pointing out legal risks in proposed regulatory or deregulatory actions.

"As with any good lawyer, he’ll be wanting to make sure that his client — the client being Scott Pruitt — is fully informed of the risks that a particular approach carries," said Fulton, who is now president of the Environmental Law Institute. "Ultimately, the decider is the administrator."

Details have already emerged about the arguments the Trump administration plans to use to rescind the Obama-era climate standards. Pruitt will argue that the agency went too far in setting carbon reduction goals by looking at what the broader power system could achieve instead of focusing solely on improvements at coal plants, an administration official told E&E News last month (Climatewire, June 12).

In his 2015 talk, Leopold said it’s "settled law EPA can regulate greenhouse gases." But he cited a 2014 Supreme Court ruling that said, "We expect Congress to speak clearly if it wishes to assign to an agency decisions of vast ‘economic and political significance.’"

Leopold said, "I can’t really think of any rule in modern environmental history that has more economic and political significance than the Clean Power Plan."

He also highlighted what he called the major arguments against the rule, one being that EPA was regulating beyond its authority by looking outside of power plants and that EPA "misinterpreted a glitch in the legislation" to redundantly regulate power plant emissions (Energywire, Feb. 10).

In a 2016 conference held by the Federalist Society, Leopold called for states to play a greater role in environmental regulations. "The federal government’s expanding regulatory reach, and it’s crowding out the proper role for the state governments to do what they do best," he said.

He also cited the high costs of the Clean Power Plan, which he warned would be passed on to consumers.

In 2013, the Tampa Bay Times reported that Leopold had fired four of his 42 attorneys shortly after arriving at Florida’s DEP. The story quoted a DEP spokesman saying Leopold downsized his staff because the agency was focusing on assisting companies in complying with the law instead of punishing them. So "there have been fewer enforcement cases" needing attorneys, the spokesman told the Times.

DEP attorneys who had been fired told the paper they thought they were terminated because the deputy DEP secretary at the time didn’t want them to do high-profile enforcement cases.

The Trump administration is also preparing to announce a nominee to lead EPA’s water office, according to several sources familiar with the decision.

Dave Ross, director of the Environmental Protection Unit at the Wisconsin Department of Justice, is expected to be the administration’s pick for that job.

Ross, who declined to comment, was previously senior assistant attorney general in Wyoming and worked in the Washington law firms Sedgwick LLP and Crowell & Moring LLP, where he focused on Clean Water Act cases and other environmental issues.

"The water office does have a fairly significant role to play in the climate adaptation and mitigation sphere," said Fulton.

Brent Fewell, a former official in EPA’s water and congressional affairs offices, commended the expected selection of two nominees with experience in the states.

"I particularly think during this administration, the focus on cooperative federalism and the growing importance of state roles in implementing these federal programs is critical," Fewell said. "I think those two are just super picks."