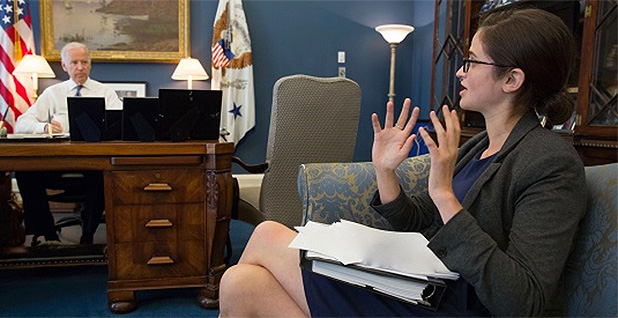 Not long after Joe Biden locked up the Democratic presidential primary, his team realized their climate plan needed a reset.

So in the spring of 2020, they decided to reach out to those who had criticized the first iteration for not being bold enough. The idea was to bring in ideas from the left — including green groups and young climate activists — as well as labor unions who had concerns about earlier versions.

Enter Stefanie Feldman. At the time, the longtime Biden aide was serving as his campaign’s policy director. But allies say that role quickly evolved into something else: Biden’s unofficial climate liaison to unions and environmentalists.

The result of that left-wing diplomacy was the most aggressive climate platform in presidential general election history — a $2 trillion plan centered on clean energy jobs and environmental justice.

Now Feldman will get a chance to turn that platform into policy. Biden tapped her earlier this year to serve as a deputy assistant, as well as a senior adviser to his Domestic Policy Council. There, she will tackle climate as part of a broad portfolio.

Jason Walsh — the executive director of the BlueGreen Alliance, which works as a bridge between labor groups and environmental causes — said Feldman knows how to weave together climate policy with a jobs agenda. That skill will be critical as Biden tries to simultaneously address climate change and an economy ravaged by the COVID-19 pandemic.

"She spent a bunch of time with Biden. She’s also a really good listener and a quick study, given that she was with the campaign from day one," Walsh said. "She also had plenty of opportunities to reflect on the importance of developing a climate agenda for Biden that was simultaneously addressing the climate crisis but also profound levels of income inequality. She came into the job with a bunch of sensitivities but also developed over the campaign."

Feldman has long played a role in shaping Biden’s climate policies, including his time as vice president. She started working for Biden in 2011, and she has remained close to him since, including a stint as policy director of the University of Delaware’s Biden Institute.

Almost a year ago, when most of the country was locked down and job losses were mounting, Biden ordered his advisers to create a climate agenda that would center on jobs.

"That was right around the moment when we were starting to recognize the full depth of the coronavirus, both its health impact and economic impact," Feldman told The Washington Post. "And so that required us to scale up with the plans we had since the beginning of the campaign to recognize that we were in a new moment, which really demanded a jobs agenda."

Since Biden’s victory in November, Feldman has helped plot the administration’s executive orders. On climate, those have included the reentry of the United States into the Paris climate agreement, a halt to the Keystone XL pipeline, federal spending to incentivize clean energy development and greater outreach to environmental justice communities.

At the Domestic Policy Council, Feldman’s work will include a role in shaping Biden’s climate plans. She and others on Biden’s team are expected to use an upcoming infrastructure bill as a vehicle to advance his climate agenda.

In December, Feldman spoke at a Georgetown University forum and described how her relationship with Biden has evolved since she first started working for him years ago as a policy intern.

She said she has learned that, on climate, Biden doesn’t just want to talk to an energy policy generalist or even those with specific subject matter expertise. His main concern, she said, is to understand how any action would affect the average person.

"The thing I learned from him the most the first time I briefed him many years ago, I told him about this policy we’re going to do and he said, ‘That’s great, how will it actually look like on the ground for real people? How are you actually delivering results for people?’" she told the virtual gathering.

"I didn’t have that great of an answer back then," she said before adding: "I never made that mistake again going back to brief him."

At another point in her Georgetown talk, Feldman said one difference between the Obama and Biden administrations is the way the Biden team puts an emphasis on making sure the public understands why they’re creating a policy.

Feldman said she works closely with Biden’s communications team to make sure that outreach happens on climate initiatives. She noted that Biden has developed a communications and social media team that focuses on finding new audiences. It’s important because "a lot of the role of being president is persuasion," she said.

Clean energy groups so far have been enthused by Feldman’s climate work.

Biden listens to her and takes her ideas seriously, said Heather Zichal, CEO of the American Clean Power Association and a former Biden campaign climate adviser.

"I have worked with Stef in many different phases of her career and couldn’t be more excited about her return to the White House," Zichal said. "She’s a smart, dedicated public servant and, most importantly, has the ear of President Biden."