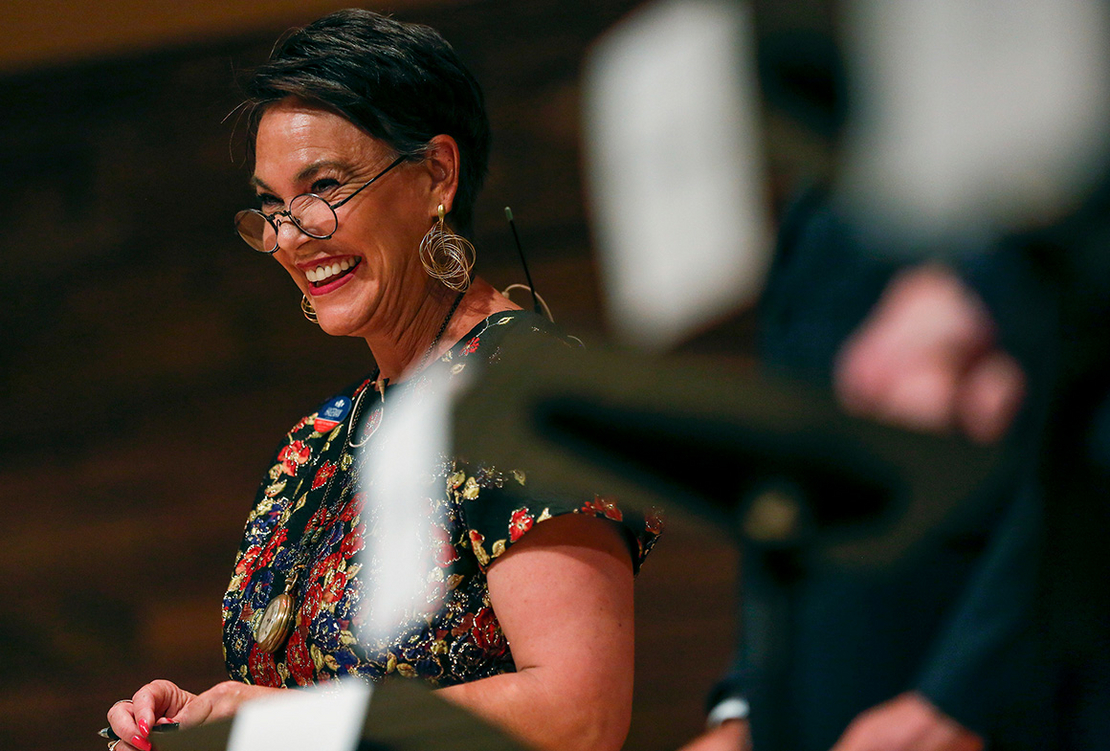 Rep. Liz Cheney’s Republican primary challenger is leaning on her decades of legal fights against the federal government’s natural resources policy in her battle against the incumbent.

Harriet Hageman, an attorney, entered the race for Wyoming’s sole House seat in September on a platform of complete alignment with former President Trump, amid Cheney’s outspoken opposition to the former president over his involvement with the Jan. 6, 2021, attack on the Capitol building and other actions.

But Hageman is also presenting herself as the better candidate to fight what she sees as overreach by President Biden’s administration. She’s pointing to her legal work, battling against policies like Endangered Species Act protections for gray wolves and conservation of national forests, to show that she’s the candidate to represent Wyoming’s interests.

"So does the federal government. So does the EPA. … They play to win," she said. "One of the things about going up against, say, the EPA is that they have unlimited resources. And when they’re going out and doing a test case, for example, trying to take over irrigation in northern Wyoming, they’re going to throw everything that they have at it to do that," she continued.

Hageman and her campaign didn’t respond to requests from E&E News for an interview or to expand on her legal work.

Her work has almost always put her on the opposite side of the conservation community.

"Although Harriet Hageman more recently is known for her flip-flop to support Trump and challenge her previous confidant Liz Cheney, she has a long history with environmental and conservation groups," said Dan Smitherman, Wyoming state director at the Wilderness Society.

"Most of her work was with private property, water and grazing rights, but she forged a legitimate reputation as an anti-public lands ‘sagebrush rebellion’ lawyer and pro-ranching, anti-wolf advocate," he said.

Hageman said last month on the radio show "Wake Up Wyoming" that her first big case after she launched her own law firm in 2001 was representing the state of Wyoming in challenging the U.S. Forest Service’s roadless rule, when was written in the final days of President Clinton’s administration. The case resulted in a 2003 federal court injunction, which the administration of President George W. Bush didn’t appeal.

Smitherman estimated that the roadless rule litigation had "the most significant impacts" on conservation.

In another notable case, Hageman represented David Hamilton, a Wyoming landowner, in his battle against EPA’s 2007 determination that an irrigation ditch violated the Clean Water Act. "After a two-week trial, we prevailed in that case, and the EPA lost. Because we were right. The Clean Water Act does not apply to his activities," she said on "Wake Up Wyoming.

Hageman worked for many years for an industry coalition in Wyoming to get the gray wolf’s Endangered Species Act protections removed, and in 2009 fought the Department of Agriculture’s determination that certain cattle transported between states need electronic tags.

At times, however, her legal work on behalf of industry has been in opposition to local decisionmakers. In one case, she successfully represented a gravel company in challenging a Wyoming county’s decision to block a gravel mine operation, according to the Wyoming Tribune Eagle.

More recently, she’s been sounding the alarm on Biden’s "30 x 30" initiative, also known as "America the Beautiful," which aims to conserve 30 percent of the nation’s land and waters by 2030 (E&E Daily, Dec. 20, 2021). She argues it’s a "land grab," a threat to Wyoming and an attempt by Democrats to hasten the decline of rural America.

"The federal government under Joe Biden and radical Democrats are intent on taking over and federalizing our private property rights under the auspices or claim of combating climate change. This is a U.N.-driven, unlawful land grab that would be devastating to the economy in this country and dramatically alter the very nature of private property rights and who and what the United States is," she said on the "Working Ranch Radio Show."

The Biden administration has fought back against similar arguments, saying the conservation efforts are completely voluntary and the government is not seeking to take anyone’s land.

Hageman grew up on a ranch near Fort Laramie, Wyo., where she said she and her siblings had to move cows, fix fences and do other work on a regular basis. She studied at the University of Wyoming, where she got both a bachelor’s degree and a law degree.

Between her legal and advocacy work, Hageman has been active in Republican politics and campaign finance. She was a previous Republican National Committee representative for Wyoming and ran unsuccessfully for governor in 2018.

She was also an ally to Cheney previously and was a critic of Trump, working in 2016 to stop his presidential nomination. But she later became an ally to him, and Cheney’s increasing estrangement from him led her to abandon the lawmaker.

"We sent her to Washington, D.C., to be an ally of Donald Trump, and she’s turned into a mortal enemy of not just Donald Trump but the ‘America First’ agenda,” she told Bannon.

Hageman cites her work not only to show her dedication to ranching, oil and natural gas, and other industries, but also to argue that Cheney has abandoned Wyoming’s priorities.

For example, she says it’s malpractice that Cheney isn’t on the House Natural Resources Committee. She was on the panel in her first two terms.

"The Natural Resources Committee — this is one of the first times in our history that we don’t have anybody on that all-important committee. That tells you where her priorities are," Hageman said on Bannon’s show.

When she met with Trump last year to ask for his endorsement before launching her campaign, Hageman brought up energy and regulations as two of her top priorities.

"The two primary issues I discussed with him were energy independence and what he did in terms of regulatory reform. I thanked him for his work in that regard," she said.

Myron Ebell, who used to work for a think tank launched by former Republican Wyoming Rep. Malcolm Wallop, said he’s gotten to know Hageman through her New Civil Liberties Alliance work. He’s hopeful that she can win, get a spot on the Natural Resources Committee and be a champion for industries like agriculture and energy.

"She is a hardcore conservative. But she also has establishment Republican connections, which I think will serve her well," said Ebell, who leads energy and environment policy at the conservative Competitive Enterprise Institute and led Trump’s transition team for EPA.

"She has the expertise that’s needed on the committee on a lot of federal lands issues. And she’s very strong on property rights and the rights of federal land users."

Cheney, Ebell said, had a good Republican voting record on Natural Resources but "wasn’t really interested in those issues."

Ebell expects Hageman will follow in the mold of "some of the really strong people" on Natural Resources, like GOP Reps. Tom McClintock of California, Matt Rosendale of Montana, Lauren Boebert of Colorado and Paul Gosar of Arizona, who lost his spot on the panel last year when Democrats stripped him of his committee assignments.

Cheney has projected confidence in the face of Hageman’s challenge and hasn’t backed away from her Trump criticism.

She continues to pursue action on energy and other key Wyoming industries, and has argued that her record of fighting against regulations and for increased oil and natural gas production, among other priorities, puts her ahead in the race (E&E Daily, Sept. 10, 2021).

She was also aligned closely with Trump’s deregulatory and energy agenda. She was the lead sponsor of the 2017 legislation that Trump signed to undo former President Obama’s "BLM Planning 2.0" rule that sought to overhaul how the Bureau of Land Management oversees its vast acreage — which Cheney and other opponents said would have curtailed local voices in land decisions (E&E News PM, March 27, 2017).

The primary is scheduled for Aug. 16, ahead of the Nov. 8 general election. The winner of the primary is expected to easily win the November race.