Meet the Biden official overseeing $7.5B for EVs 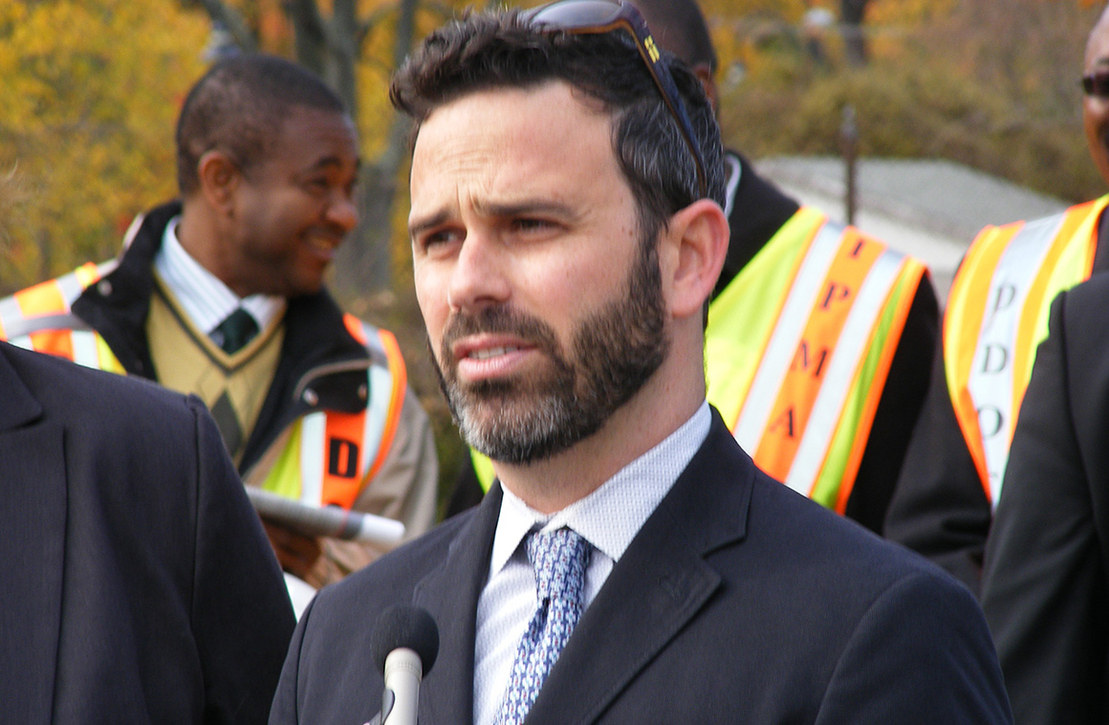 Gabe Klein is a key figure in the Biden administration’s plans to build out infrastructure for America’s future electric cars, buses and trucks. But his biggest accomplishment may involve bicycles.

In September, Klein, who has run transportation departments in Washington and Chicago, was named executive director of the new Joint Office of Energy and Transportation, which was created by the Bipartisan Infrastructure Law signed by President Joe Biden last November.

Just as the EV is a fusion of vehicle and an electrical appliance, the joint office fuses expertise from two federal agencies, the departments of Energy and Transportation. As far as anyone knows at DOE or DOT, it is the first joint office between government departments in U.S. history.

Klein’s primary job at the new office is to oversee the $7.5 billion that the infrastructure law allocated to support the construction of EV charging stations over five years. The money is mainly meant to support cars and heavier road vehicles.

But Klein’s passion and successes are mostly at the city level, finding innovative ways to bring bicycles to their streets.

In an interview, Klein said he thought he was picked because he is “somebody who was entrepreneurial, who would work within the construct, but also push the envelope.”

During his election campaign, Biden called for the creation of a half-million charging stations to fuel a future EV fleet. In the first year of that effort, the Joint Office of Energy and Transportation has sent $1 billion to states and territories to build fast chargers at 50-mile intervals along major highways (Energywire, Sept. 28).

Comments by federal officials suggest that Klein was hired to build something different than today’s liquid-fueling network.

“Gabe has spent his career spurring innovation for sustainable transportation, and we couldn’t be more excited to have him working for more electric cars and trucks on our roadways,” said Energy Secretary Jennifer Granholm in a statement upon his hiring. Klein, 51, was chosen by Granholm and Transportation Secretary Pete Buttigieg.

Klein had no ordinary upbringing.

His father, John Klein, was a political activist who marched with Martin Luther King Jr. at demonstrations in the South in the 1960s. At age 11, he studied with his father’s spiritual teacher, Swami Satchidananda, who is known for offering the prayer that opened the famed Woodstock festival. But Klein’s formative transportation experience came in Putnam, Conn., at the bike shop that his father founded, where he learned the business starting at age five.

After high school in Charlotte, Va., and getting a degree in marketing from Virginia Tech, Klein managed a chain of bike superstores through a growth spurt.

In 2002, he was hired by Zipcar as one of its first employees in Washington. The company introduced the idea of car sharing to the American market and paved the way for ride-hailing services like Uber Technologies Inc.

It was pioneering this new kind of business — and a following venture, where he ran one of the capital’s first food trucks — that got him involved with city government. He grew frustrated trying to navigate the city’s siloed approaches to innovative businesses, he wrote in his 2015 book, “Start-Up City.”

In 2009, Klein was hired by then-Mayor Adrian Fenty (D) as director of transportation. His two-year stint saw several innovations, including the introduction of Washington’s Capital Bikeshare and a bike lane on Pennsylvania Avenue between the Capitol and the White House.

In 2011, then-Chicago Mayor Rahm Emanuel (D) hired him as Chicago’s commissioner of transportation. In less than three years in that role, he established bike lanes downtown and led creation of the Chicago Riverwalk, a pedestrian walkway on the Chicago River.

Speaking with E&E News two weeks after his hiring at the new federal office, Klein discussed his plans for infrastructure dollars, what the United States can learn from Norway’s EVs and the “urbanist mindset:”

How do you view the mission of the joint office?

It’s a collaboration of DOE and DOT and also has quite a bit of interaction with the White House as well. Because this is obviously, you know, a key initiative for the president and the White House, not only in terms of transportation and infrastructure, but also from the standpoint of creating great American jobs.

It’s sort of high profile, and we really want to accelerate this idea of affordable equitable, reliable, safe and convenient — I would say frictionless — transportation.

So, that means you got to have great uptime, right? You have to actually have reliable infrastructure, which means you have to have solid contracts put in place with SLAs [service-level agreements, which lay out what services are expected by a vendor].

It’s rather complex, and it takes public and private coordination and collaboration. And for the last, you know, six years or so, that’s been a lot of what I’ve done is work on public-private partnerships, and to foster understanding between public and private and try to align incentives, and therefore align outcomes.

We also want to help to think about: what are the things that the market isn’t going to solve for that we can go out and we can pilot? We can work with states and maybe even cities.

And then, how do we also support transit? You know, there’s $5.5 billion out there for FTA [the Federal Transit Administration]. There’s billions out there for school buses. We also want it to be really clear that we are the sort of front window … [so when people] have questions, they can come to the joint office.

And if the answers live at DOE or they live at DOT or it’s something that needs to be raised more at the White House level, whatever it is, they can come to us. And we’ll figure that out.

You’re not only moving from city-level to federal government, but to this office that straddles two huge federal departments. It’s like bureaucracy on steroids. What are the challenges of working at this level?

My perception is that it is a very unique office with a very unique value proposition that does straddle multiple agencies. And I think they wanted somebody who was entrepreneurial, who would work within the construct but also push the envelope, that was mission driven and had experience in leadership and leading people in a collaborative way. And, you know, not to toot my own horn, but that’s basically what I’ve tried to do my whole career.

And I like to take on really big, complex challenges. And this might be the biggest that I’ve seen. But it’s also the biggest opportunity.

A key role of the joint office is establishing federal guidelines for EV-charging infrastructure. People are divided on some key standards, like the amount of uptime a charging station should have or whether a station should require payment by credit card. What are the specific issues you’re wrestling with?

Well, this is another reason why I actually think that I’m good for the job. And it’s going to be really interesting and fun. I feel like a lot of times leaders don’t peel back the onion enough. And they sort of take for granted that the two options on the table are the only two options.

What I like to do is dig much deeper and, again, focus on the outcomes. I like to ask those hard questions.

Yes, there’s some technical standards that have to be hashed out, and there’s payment standards and all that. I’m not personally terribly worried about that. I think that the biggest barrier to this program is going to be overcomplicating it. Then we create giant infrastructure projects where there’s no need to be.

That means also looking at benchmarks from countries that may be much smaller but may be ahead of us in implementation, whether it’s Norway or Germany or other places where they’ve tested things like [light] pole-based charging for a few years. We can learn like: how much did that cost per charger? Or per port? How have the maintenance issues been? There’s no reason to reinvent the wheel.

If somebody’s doing something great, we want to learn from it. And we want to bring it here and make it really easy for our state and local government partners to adopt that.

Your experiences is mostly in cities. But many future users of EV infrastructure are in suburbs and rural areas. Why should they trust you to manage this national program?

So, a couple of things. One is I grew up in a very rural place in Connecticut, where we had well water — we didn’t have running water. And then I grew up rural in Virginia. It wasn’t until later that I actually moved to Washington, D.C.

So I understand, personally, the different contexts and that you need to be context-sensitive. I also think that it’s absolutely crucial in America to focus on intercity, suburb to suburb.

For instance, I think that the Ford [F-150] Lightning pickup is probably one of the most consequential vehicles that we’re going to be putting on the road in this country. Because I think it’s going to change the hearts and minds of people that weren’t traditionally thinking about an electric vehicle.

And the reason they should trust me is that I ran, technically, a state DOT, because Washington, D.C., is considered a state from the standpoint of funding and oversight by the federal government.

And you can probably guess that I think that we should be looking multimodal.

We’ve already found out there’s some amazing programs [and] pilots that we think can be expanded. I think it’ll be a paradigm shift to have clean electric transportation that serves a particular use case that that person has that day.

When you go to other countries — you go to Amsterdam or something, you go to Copenhagen — people are like, “Yeah, you know, I’m gonna drive today. I’m gonna cycle the next two days. I’m gonna walk.”

So we don’t need to sort of pit one mode against another. Americans love choice. And I think this reinvention around renewable energy and electrification, if we do it right, is going to give Americans so many choices — not dictating what they should do, but giving them the opportunity to get out of their car, if they want to.

How did bicycles become such a big part of your life?

So, when I was a young kid — and ironically, this is during the energy crisis of the 1970s — my father … really got interested in this idea of using bikes and mopeds and even skateboards as, you know, utilitarian transportation.

I actually ended up after college going to work for the largest bike retailer at the time in the world, Bikes USA. It was a venture-capital-funded rollout of bicycle superstores. And by the end, I was actually the director of stores, running all the operations for all the stores when I was about 27.

So I started to get really into the … urbanist mindset, if you will. I lived in Washington, D.C., at the time. I lived in Dupont Circle, and it became apparent to me that you didn’t really need to own a car if you lived in a city, if there was great transit.

So that was sort of how I came from being in the alternative transportation space to then … [being interested in] how cities could be sort of more positive in terms of societal outcomes, more equitable and also to generate more economic benefit by figuring out how to have a great mobility system, not just a transportation system.