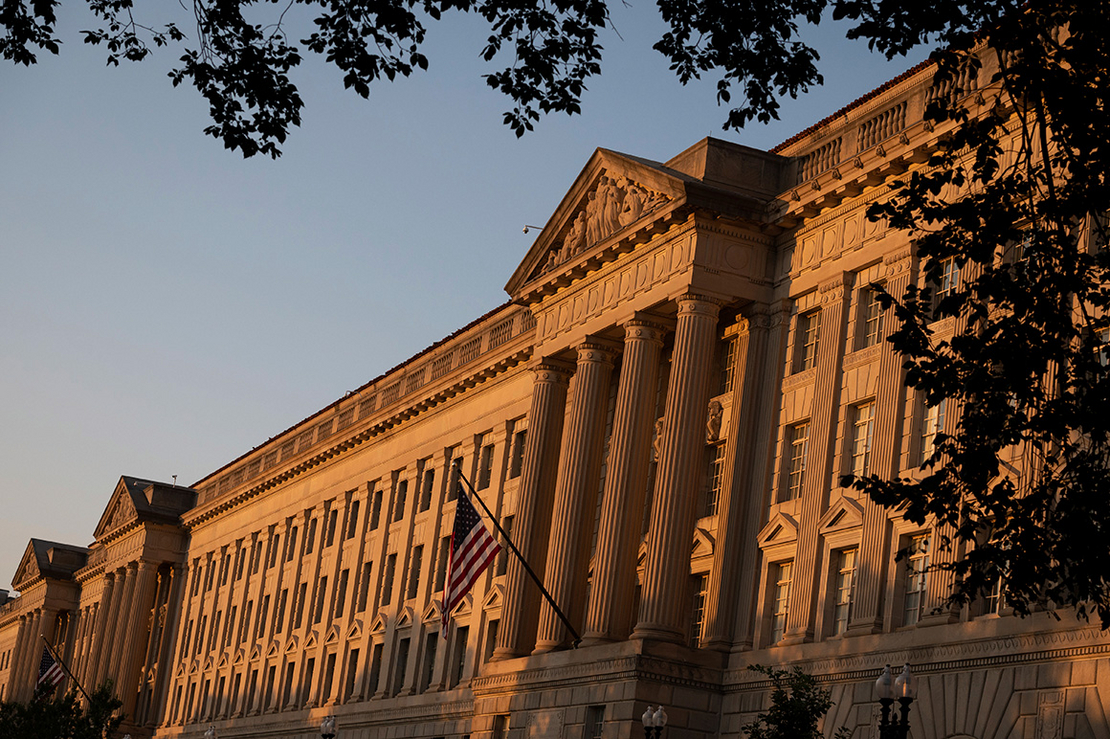 The Department of Commerce in Washington. Graeme Sloan/Sipa USA (Sipa via AP Images)

The solar industry is blaming much of its current troubles on one company: Auxin Solar.

But the CEO of that company, Mamun Rashid, says the industry is engaging in “fearmongering.” The country’s climate goals remain in reach even if the Biden administration complies with Auxin’s request and slaps new tariffs on solar imports, he said.

New tariffs “would be good for America. It would allow us to be energy-independent,” Rashid said in an interview.

Ideally, a larger part of the supply chain for solar power would be produced in the U.S., including solar cells and other items like panel glass, frames and junction boxes, said Rashid. “We view this as an amazing opportunity for a renaissance in domestic manufacturing. And not just for the modules,” he added.

California-based Auxin, a solar panel manufacturer, set off an intra-industry war in February after it asked the Commerce Department to investigate new tariffs on solar equipment imported from four Southeast Asian countries: Cambodia, Malaysia, Thailand and Vietnam. Solar groups predicted that calamity would follow, since the four countries make up about 80 percent of the panels currently used in the U.S.

In March, Commerce opened a preliminary probe based on Auxin’s petition, prompting the president of the Solar Energy Industries Association (SEIA) to say Commerce’s action creates “the most serious crisis we have faced in our collective history” (Energywire, April 6).

Auxin’s request for tariffs of up to 250 percent on solar panels and cells accuses Chinese companies of evading U.S. duties by using the four countries as staging grounds. Little more than minor assembly takes place at those Southeast Asian factories before the products are exported to the U.S., argued Auxin in the petition.

The company says the process is part of a Chinese government strategy that national solar producers take advantage of to sell at rock-bottom prices in the U.S., driving American competitors out of business and preserving China’s control of global solar markets.

Rashid, a former computer chip designer with Intel Corp. who co-founded Auxin in 2008, says his company is doing what is necessary to restore a level playing field.

“It’s about, is cheating going on or not? If cheating is going on, then we’d like to see trade laws enforced,” he said in an interview with E&E News.

He maintains that alarms raised by solar trade groups stem partly from developers intent on securing greater profits at the expense of domestic manufacturers. Trade groups’ predictions of doom didn’t fully pan out after past rounds of tariffs were enacted, he said (Energywire, March 29).

Still, for a large part of the solar industry, Auxin Solar is playing the part of villain.

In one forecast this week, SEIA said 46 percent of new solar installations could be lost this year and in 2023 because of Auxin’s petition. The American Clean Power Association’s survey this month said the mere threat of tariffs is endangering about 65 percent of utility-scale solar projects.

This month, S&P Global Market Intelligence also released data suggesting that even before Commerce announced on March 28 that it would begin studying Auxin’s petition, its mere presence was having an effect. Solar panel shipments had slipped, with the number of shipping containers falling 27 percent over the first three months of the year compared with the same period in 2021.

Trade groups have accused Auxin of undertaking a self-interested ploy at the expense of the wider industry and point out that some other solar manufacturers view the petition as potentially damaging. Those include at least two manufacturers with U.S. factories — Silfab and JinkoSolar, which have asked Commerce to reject Auxin’s request.

White House and other Biden administration officials have said little about the issue beyond noting that Commerce tariff investigations are a largely independent process. According to an Energy Department blueprint released last year, solar could contribute over 40 percent of all power, up from around 4 percent at present, to reach net-zero emissions by 2050 (Energywire, Sept. 9, 2021).

E&E News spoke with Rashid on a Zoom call last week about the solar industry’s challenges, what Auxin’s petition might mean for U.S. climate goals and “vitriol” on social media.

Trade groups describe Auxin’s tariffs as immensely damaging for growth, which you say is just fearmongering. How do you know that’s the case?

I can only speak to my experience. In the last 14 years, we have seen tariffs being instituted and we’ve seen the predictions that were made on what would happen if the tariffs were put in place. And it has never materialized. Deployments have continued to grow double digits and outperform predictions, even prior to tariffs being imposed, and pricing has continued to fall. I have no reason to believe it’ll be any different this time.

Some other solar manufacturers have asked Commerce to reject your request. What would you say to them?

If there’s been no cheating going on, there’s absolutely nothing to worry about. I’ve failed to understand why shipments have stopped, why imports have stopped. No adjustment has been made. All that has happened is an investigation has started into allegations that there was circumvention happening. If I’m a manufacturer overseas, or I’m an importer, and I know I wasn’t participating in any kind of circumvention, I wasn’t cheating, I don’t have anything to worry about. I don’t understand why the concern is there.

Aren’t the reports of slowed shipments proof that the petition could dampen growth?

I look at it differently. It might be proof that cheating is going on. What are we afraid of? If there’s cheating going on, of course that’ll have impacts. That’s a separate thing. But just because a petition is filed which is requesting an investigation, we didn’t ask for any shipments to be stopped or frozen.

All these claims — I’ve seen the headlines but I haven’t seen actual reports from these publicly traded companies that say they’ve had to cancel or delay projects. Other than delays that are related to the supply chain delays. Which, by the way, is going to benefit the deployment industry. So the imposition of asking people to follow proper trade laws, which results in bringing the supply chain to U.S. shores, also helps deployment, because it makes it much more predictable.

There are whispers within the solar industry that other, larger manufacturers may be bankrolling Auxin’s petition. Are you going at it alone?

I want to make sure I understand that. Does that mean you’re paying your own legal fees?

Auxin’s tariff petition is very similar to one filed by the American Solar Manufacturers Against Chinese Circumvention (A-SMACC), which was rejected by Commerce last year because A-SMACC wouldn’t reveal their identities. Was Auxin a member of A-SMACC?

My focus is on the petition we’ve filed. I’m not going to speak to the previous petition, but the reason the previous companies wanted to stay anonymous was because of their fear of retaliation, and it’s very real. I’m living through it right now. The retaliation is going on. But it is what it is. It’s still the right thing to do.

You wrote recently that after filing the petition, your company has been “hacked by the Chinese” and experienced “racist vitriol on social media.”

I don’t know who did the hacking. But we have been hacked multiple times. Our security servers. As far as the vitriol, that’s all out there. You can just look it up and see it. People tell me about it. My employees tell me about it. They’re disturbed by it, because they feel like, have we done something wrong? Lately I just tell them, just turn it off. It does no good. It’s just folks trying to protect their own interests. But we are on the right side of history.

I keep going back to this — we’ve been around for 14 years. And we have lived through all of this. When you see panels coming in that are below the cost of your bill of materials, something is not right.

Our production capacity is 150 megawatts right in this moment. It’s going to be 400 megawatts by the end of this year.

The facility is designed for more than a gigawatt. All of that will happen if the demand is there. We can very quickly scale up to meet that demand.

What foreign countries do you source from?

We source parts from all over the world. Germany, Taiwan are a couple of countries, as well as the U.S.

What would you want to see out of solar policy? What would make domestic manufacturing sustainable?

First of all, we need to make sure all the trade laws are being enforced so we know it’s an even playing field. That’s a fundamental requirement. Beyond that, if there are incentives such as tax credits for manufacturing, it’ll make it that much easier to attract investments, to accelerate that capacity expansion.

Today, everything’s privately funded for Auxin Solar, because of the risk on investments in solar. There’ve been so many high-profile failures over the last 10 years that investors are a little gun-shy about investing in solar manufacturing. Once it’s a level playing field by making sure that the trade laws are being enforced, anything on top of that just accelerates the renaissance that we’re about to have in domestic solar manufacturing.

What will you do if you lose the petition?

We would carry right on. Because there are products we can make that no one else can make. They are highly customized products that we make here. We would be fine as Auxin Solar, but this is beyond Auxin Solar. It’s about the entire supply chain.

If Commerce institutes your tariffs, is it clear to you that the U.S. can still reach its climate goals?

Yes, 100 percent. Solar was invented in the U.S. In fact, the supply chain used to be here, so [producing it here] isn’t something we haven’t done before.