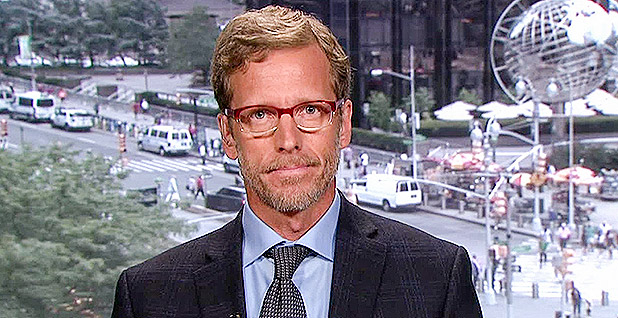 It was an unseasonably warm Wednesday in October when Joel Clement — the former top climate policy expert at the Interior Department — hit "send" on his resignation letter.

It lambasted President Trump and Interior Secretary Ryan Zinke for being "shackled to special interests," muzzling scientists and ignoring the threats of climate change. Their scientific denials place vulnerable communities, like Alaska Natives, at great risk, he wrote.

And just like that, Clement became a voice of the resistance.

A forest ecologist by training, Clement became a climate change policy expert who spent seven years in the federal government. His decision to resign had been building for months. Meeting Zinke only accelerated it.

Clement briefed Zinke early in his tenure about invasive species. During the meeting, he recalled how the secretary didn’t quite grasp the issue. That wasn’t so unusual. Zinke was being flooded with information at the time. The agency oversees 500 million acres of public land with 70,000 employees. So migrating bugs and plants don’t rank that high.

But something else was weird, to Clement. Zinke had an air of arrogance. He seemed to be dishing on Clement just because he was an easterner. The Montanan Cabinet secretary seemed to be expressing his favoritism for employees who grow up out West, where most of the agency’s domain is located, Clement said.

Months later, in July, Clement and dozens of other high-level career employees with the Senior Executive Service (SES) were abruptly reassigned. Interior’s inspector general is investigating if the moves were politically motivated. While SES employees can expect to shift locations and jobs during their tenure, Clement felt that his reassignment was retaliatory — a way to silence those who were working on climate change. He was moved to Interior’s Office of Natural Resources Revenues. Instead of planning for the effects of sea-level rise on Alaskan villagers, he would collect royalty checks from the oil and gas industry.

Then, in September, when Zinke told a crowd at the National Petroleum Council that "30 percent of the crew" was not "loyal to the flag," Clement took it personally. It left a "bad taste" in his mouth.

"They’re not advancing the mission, and they were avoiding the career staff at every turn," Clement said in an interview. "Experts were being sidelined, and I knew I had to say more and do more about this and I couldn’t do that from inside."

Today, Clement embodies what advocacy groups say is the systematic dismantling of climate research across the federal government. While he chose to enter the spotlight, deciding how best to use it is an evolution.

The call of the loon

Hours after hitting the "send" button, he was cutting the waters of the Potomac River in his outrigger canoe. Days later, Clement loaded up the car and made the 10-hour drive to his cabin in the lakeside community of Wayne, Maine, located about an hour north of Portland.

A native Mainer, Clement grew up running around the verdant woods surrounding his home in Falmouth, a suburb of Portland. He describes his childhood as fairly idyllic. His father was a financial consultant and sold insurance and his mom was a homemaker who worked part time.

Clement plotted his next moves at his forest retreat. He spent time sitting on the dock near his cabin listening to the call of the loon.

"It was only, you know, not even seven years that I had been there, but I really liked being in the federal service and all of my expectations were exceeded in terms of impact and access," he said. "There has to be this level of introspection of like, ‘Am I the right person? Am I, like, enough?’ whenever someone makes a decision like this."

Not everyone believes that his reassignment was retaliatory for speaking out about climate change. In an article published in The Federalist, author John Daniel Davidson argues that Zinke probably wanted Clement to resign, not for talking about the climate, "but rather because the climate change work he was doing was a colossal waste of taxpayer dollars."

Interior officials, meanwhile, have stressed that the department is undergoing operational changes. Reassignments are part of the large push to radically reorganize the agency. In a statement, the department previously said the moves were "being conducted to better serve the taxpayer and the Department’s operations." It’s unclear if planning for the impacts of climate change will factor into the agency’s reorganization.

Clement’s life became more turbulent after he filed a whistleblower complaint in July. He studied trees when he was younger to understand the power of nature. Now he was witnessing the power of politics. As a teenager, he said the woods felt "fancy." Confined by its canopy, "you could be anyone."

After graduating from the University of Virginia in 1988, Clement hitchhiked to Costa Rica to see the rainforest. There he started climbing, enamored by the entire ecosystems thriving in the forest canopy.

Nalini Nadkarni, a professor at the University of Utah, met Clement in the mid-1990s. She was teaching at Evergreen State College in Olympia, Wash., where Clement was getting a master’s degree in environmental science. His thesis focused on plants that grow in the canopies of temperate rainforest trees in New Zealand, funded by a grant from the National Geographic Society.

"He wanted to carry out a study that was both basic and applied, and he succeeded in doing that," Nadkarni said. The area of research was new, but Clement was convinced it would take off, she said.

The two co-founded the International Canopy Network, a nonprofit that connects researchers, educators and conservationists. After graduating, Clement spent eight years with the Seattle-based Wilburforce Foundation, working on climate change adaptation programs. Many of them were located in the Arctic.

Then the Interior Department called in 2011 and asked him to run the Office of Policy Analysis. He jumped at the opportunity.

"You can stand outside and throw ideas over the wall all day long, but until you’re inside and working, it’s really not going to have a direct effect on policy and planning and management," Clement said.

During his time at the agency, Clement drafted its now-defunct mitigation policy, which broadly calls for users of public lands — oil and gas companies, solar installers, and more — to help pay for conservation work in order to maintain public landscapes. He served as Interior’s liaison to the U.S. Global Change Research Program and to the Arctic Council.

It was through the Arctic Council that James Gamble first met Clement. They struck up a friendship.

"It’s like once he decides to trust you he just starts telling you all of these very personal details about his life," said Gamble, who is now senior Arctic program officer for Pacific Environment. "He’s unusual in that way; he doesn’t hold back."

Clement is also an unabashed Maine loyalist. He once riffed about whoopie pies — the state’s official treat — after he determined that Gamble had eaten an inferior version.

"That was Joel," Gamble said. "Fifteen minutes on a whoopie pie and you were fascinated."

At Interior, Clement was tapped to lead an interagency effort to develop a landscape-scale management plan for the Arctic in the face of a changing climate. The goal was to build momentum across the government to bring more money to the Alaska Native communities that are on the front lines of sea-level rise and other impacts.

Alaska is warming at twice the rate of the rest of the world, and a number of villages, including Kivalina and Shishmaref, are facing imminent threats from melting permafrost, eroding shorelines and rising seas.

"The big tragedy of all of this is not that I lost my job, it’s that those Alaskan Natives are being completely neglected by this administration," Clement said.

Clement’s concern about the administration’s lack of climate action lead him to spit fire on Twitter. #zinkeresign commonly adorns his missives.

He maintains that being a scientist doesn’t preclude him from speaking out.

"Your work is your work. You follow a process and the scientific method and that remains absolutely essential to that work, but that doesn’t mean you don’t have a personal right and responsibility to bear witness to things that are inappropriate." Clement said. "In this case, the Trump administration, I think more people should be doing it and I hope they do."

He has come to recognize that not every federal employee can take the drastic steps he did. As an unmarried white man who served in the top echelon of the federal government, Clement acknowledges he was afforded certain advantages, and he wants to speak more openly about that privilege.

Today, Clement’s life is much different than it was three months ago. He saves a ton of money on dry cleaning, he says as a joke. And there have been a lot more television appearances. Clement says that his high point was appearing on "Full Frontal with Samantha Bee."

He recently secured roles with the Union of Concerned Scientists as a senior fellow, as an associate at the Stockholm Environment Institute and with the Packard Foundation. In all of them he is promoting scientific integrity and carrying the message that the government should not interfere with science. Clement is also working closely with Harvard’s Kennedy School to help develop their new Arctic science and policy initiative.

He’s also drafting a book proposal and carrying on the work he did at Interior thinking critically about how to build resilience and adapt to climate change in the Arctic.

"I’m still trying to hold these guys accountable and trying to be that voice for the folks inside who don’t have one right now or choose not to do that for fear of reprisal," he said. "I’ve been given this platform through their own incompetence. I’m going to use it as much as I can."