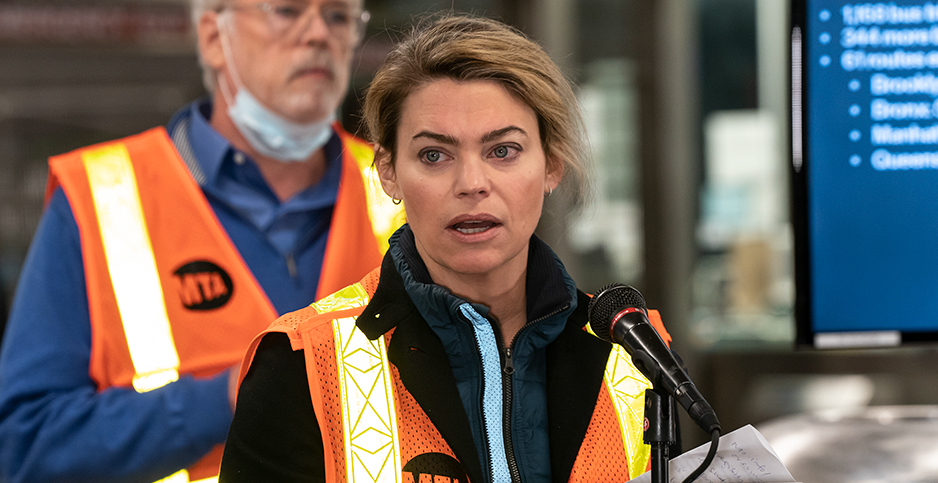 Sarah Feinberg, interim president of the New York City Transit Authority, is a top candidate to be secretary of Transportation in the Biden administration, according to two former Department of Transportation officials. Lev Radin/Zuma Press/Newscom

President-elect Joe Biden could tap a highly qualified — yet often overlooked — woman to lead the Department of Transportation, according to two former Obama-era DOT officials.

Sarah Feinberg, the interim president of the New York City Transit Authority and former head of the Federal Railroad Administration, has flown under the radar in debates about who could be Transportation secretary under Biden.

But Feinberg has the skills and experience to be selected for the job, according to the two former officials, who requested anonymity in order to speak candidly about their discussions with the Biden transition team.

Feinberg is "somebody who has been mentioned once or twice but who is a dark horse who could end up getting it," said one of the officials.

"She isn’t getting the headlines that some other people are. But when you look at her profile as an experienced leader who is also running the largest transit system in the country, that starts to check a lot of boxes of somebody who can step in on day one," the person added.

A native of Charleston, W.Va., Feinberg began her career as a press secretary for several Democrats on Capitol Hill, including then-Senate Minority Leader Tom Daschle (D-S.D.).

From 2009 to 2010, she held various roles in the Obama administration, including special assistant to the president, senior adviser to White House chief of staff Rahm Emanuel and chief of staff to Transportation Secretary Anthony Foxx.

In 2015, the Senate confirmed her by voice vote as administrator of the Federal Railroad Administration, a role she held for two years.

After stints at Facebook and Bloomberg LP, Feinberg, 43, took the helm of the NYC Transit Authority in March, shortly before the city emerged as an epicenter of the COVID-19 pandemic.

Feinberg’s time at the NYC Transit Authority has given her experience with responding to the coronavirus pandemic — experience that could translate well to DOT.

"You could end up in a situation where the department plays a bigger role than normal in the distribution of the vaccine," the former official said.

"Some of the vaccines have to be refrigerated. Airlines, trucks, rail — all of those are going to become really important," the person added. "So you probably need someone who knows the department really well and can oversee a partnership between industry and the agency."

In addition, Feinberg helped with the Obama administration’s response to the Ebola epidemic, providing strategic counsel to Foxx at DOT.

"During Ebola, governors started saying, ‘I don’t want trucks carrying hospital waste from places where there’s Ebola to travel through my state,’" Feinberg recalled in a recent interview with Bustle.

"Hospitals treat their waste in a way where disease does not survive, so there’s no risk whatsoever," she added. "But there’s a panic that makes people behave in ways that aren’t reasonable."

Besides the pandemic response, the next DOT secretary could play a role in implementing an infrastructure package expected in the next Congress. Feinberg, who declined to comment on the record for this story, has experience with outreach on the Hill.

Several other names have been floated for Transportation secretary in recent weeks, as Biden has continued to weigh his Cabinet appointments.

One name at the top of many lists is Los Angeles Mayor Eric Garcetti, who served as co-chair of Biden’s campaign and oversaw a revamp of public transit in LA. (Greenwire, Oct. 19).

But recent headlines about Garcetti have focused on a scandal engulfing Rick Jacobs, a close adviser to the mayor who faces multiple allegations of sexual misconduct.

While Garcetti has denied knowledge of the inappropriate behavior, a photograph obtained by the Los Angeles Times shows the mayor witnessed a sexually provocative gesture.

If Garcetti advanced in the DOT chief sweepstakes, the scandal could resurface during his Senate confirmation hearing.

Another name on people’s lips is Beth Osborne, a former aide to Sen. Tom Carper (D-Del.) and the director of Transportation for America, an advocacy group.

In a phone interview, Osborne declined to say whether she was under consideration for Transportation secretary or whether she would be interested in the role.

Osborne did stress, however, that the next DOT chief should make sure the country’s transportation policy is "helping us reach our climate and racial equity goals."

To that end, Osborne said it would be "relatively easy" for DOT to reinstate an Obama-era proposal that would have required city and state highway planners to account for the expected greenhouse gas emissions of new projects. The Trump administration moved to kill the proposed rule in 2017 (Greenwire, Oct. 5, 2017).

The offices of García and Pressley, who serve as co-chairs of the Future of Transportation Caucus along with Rep. Mark Takano (D-Calif.), didn’t respond to multiple requests for comment.