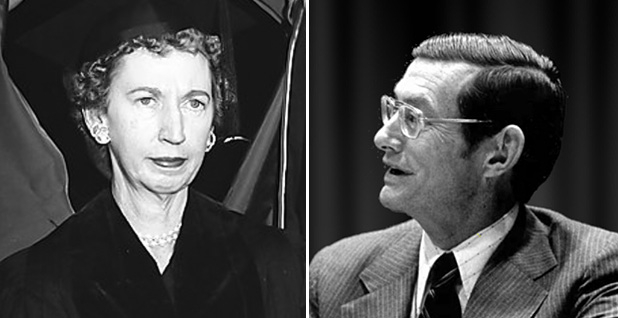 Some of the most prolific funders of today’s climate science denial groups died decades before the general public knew climate change was transforming the planet.

While much of the attention on opposition to mainstream climate science has focused in recent years on funding from fossil fuel companies, there’s growing support for foes of carbon regulation from conservative foundations that are not widely known.

Foundations formed by now-dead industrialists have been instrumental in promoting rollbacks of regulations that protect the public from deadly air pollution and spreading misinformation around climate science.

Fueled by hundreds of millions of dollars in assets, the foundations have supported groups that worked with the Trump White House to roll back vehicle emissions standards and to ease restrictions on power plant pollution and water protections, public tax filings show. They have quietly funded presidential advisers who worked to conduct a hostile White House review of climate science and to restrict EPA’s use of scientific research when crafting public health protections.

Among the foundations, which operate independently but bankroll many of the same groups, are the Lynde and Harry Bradley Foundation, the Searle Freedom Trust and the Sarah Scaife Foundation.

Robert Brulle, a Drexel University sociologist who studies and tracks climate denial funding, said such foundations have been quietly shaping public life for decades. They offer a way, he said, for "dead industrialists" to transfer economic power into cultural and political power that can last in perpetuity. The power of such foundations lies in their ability to operate for generations without any check on their power, he said.

"These foundations are totally unaccountable to anybody," he said. "A foundation can pretty much do whatever the hell it wants regardless of the consequences. Foundations have undemocratic and plutocratic power."

None of the foundations responded to requests for comment.

They have pumped millions of dollars into groups that have worked closely with the Trump administration and Congress to weaken climate policy and create confusion around climate science, including the Competitive Enterprise Institute (CEI), CO2 Coalition, Heritage Foundation, Heartland Institute, Cato Institute and Texas Public Policy Foundation.

And the foundations have been a source of "baseload" funding for organizations that have battled the government for the last 40 years, said Kert Davies, director of the nonprofit Climate Investigations Center.

Even before fossil fuel companies and the Koch brothers began pumping money into organizations that oppose climate regulations, the foundations were quietly supporting such work, he said. And as the fossil fuel industry faces increasing scrutiny over its role in climate misinformation and has backed away from some public funding, the foundations have continued their support, Davies noted.

"They don’t have any material interest in fossil fuels, but they are fundamentalists about hating the government, hating regulation and trying to stop any progress on things like climate change because they see it as almost a step toward communism, it’s almost that stark," he said.

To be sure, not all foundations linked to dead industrialists oppose climate science. The fortune of John D. Rockefeller of Standard Oil is now funding climate action. The Rockefeller Brothers Fund spends more than $10 million annually supporting climate causes and funding groups that promote regulation of fossil fuel.

One of the largest donors to anti-climate policy causes is the Lynde and Harry Bradley Foundation, which has spent millions of dollars annually on groups that try to sow doubt about climate change and that work to weaken climate regulations.

Public tax filings show that the Wisconsin-based foundation has assets of about $1 billion and was named for two brothers — Lynde, who died in 1942, and Harry, a member of the far-right John Birch Society, who died in 1965. The family made its fortune in electronic controls.

The foundation was expanded into a conservative powerhouse in 1985, when a sale of the family company expanded the foundation’s assets to $290 million.

In recent years, the foundation has pumped millions of dollars into groups that worked closely with the Trump White House to roll back most of the Obama administration’s climate policy; to increase the voice of industry researchers in order to diminish air pollution regulations; and to steer federal agencies such as the Interior Department, EPA and the Department of Energy toward the interests of fossil fuel companies.

Last year alone, the Bradley Foundation spent more than $2 million funding CEI, the Cato Institute, the CO2 Coalition, the Heritage Foundation, FreedomWorks, the Texas Public Policy Foundation and the American Legislative Exchange Council. Former employees of those groups have served in senior positions at the White House, Interior, DOE and EPA, and on President Trump’s transition teams for those agencies.

Millions of dollars to the same groups has also flowed from the Searle Freedom Trust, public tax filings show. The trust was founded by Daniel C. Searle, who died in 2007 and was a fourth-generation CEO of a family pharmaceutical company that was sold to Monsanto.

In 2018 alone, tax filings show, the Searle trust gave more than $2 million to groups that worked with the Trump administration to roll back environmental regulations, including the CO2 Coalition, CEI, Cato and the Heritage Foundation.

In addition to policy support, the foundation funds public outreach for climate denialism. In 2018 alone, it spent more than $300,000 on groups that publish and promote climate misinformation, including the Daily Caller News Foundation and the Prager University Foundation, tax filings show.

The work of the Bradley Foundation and Searle trust is complemented by funding from the Sarah Scaife Foundation, which is named after Sarah Mellon Scaife, an heiress to the fortune of her father, Richard Mellon, a banker and industrialist.

Scaife, who died in 1965, focused her support on funding for hospitals, disability and poverty issues, and environmental causes. Her money was even used to fund the University of Pittsburgh laboratory where the polio vaccine was developed by Dr. Jonas Salk in the early 1950s.

After Scaife’s death, her son, Richard Mellon Scaife, turned the foundation into a powerhouse for conservative issues, spending tens of millions of dollars on the Heritage Foundation alone before his death in 2014. Scaife steered the family’s fortune toward conservative causes so thoroughly that Hillary Clinton once pinpointed him as the figurehead of a "vast right-wing conspiracy."

The Sarah Scaife Foundation now funnels millions to groups that oppose environmental regulations and that attack climate science. That includes more than $3 million in its most recent filing, including to Cato, CEI, the CO2 Coalition, FreedomWorks, the Committee for a Constructive Tomorrow, and the Energy and Environmental Legal Institute, according to tax filings.