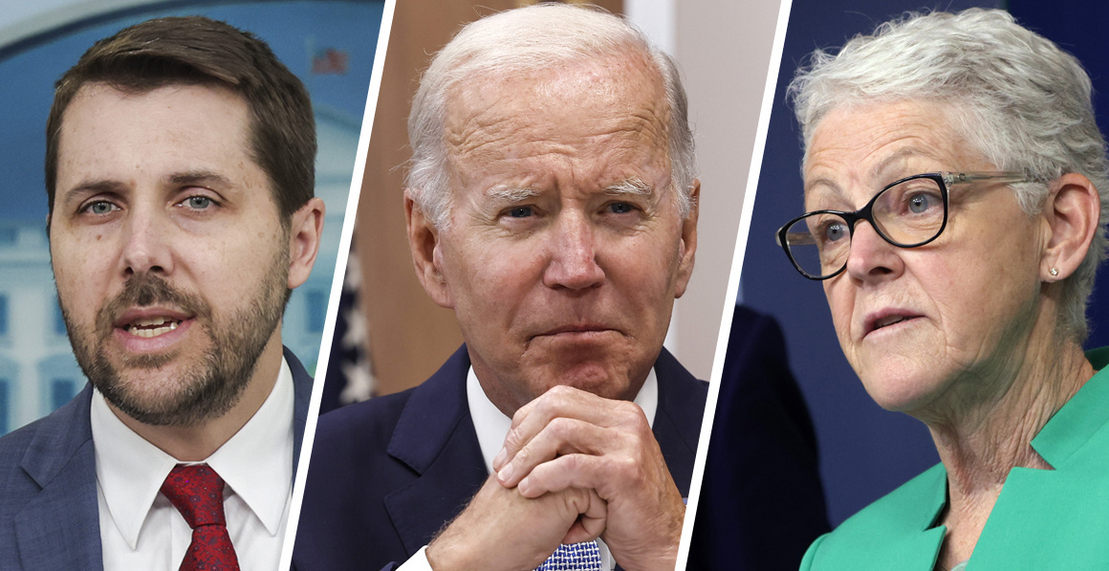 A few months before President Joe Biden and Chevron Corp. CEO Michael Wirth were publicly sniping over gas prices, Wirth was at the White House meeting with some of Biden’s top advisers, new records show.

Wirth attended two separate White House meetings in March, according to visitor logs released by the administration. The Chevron CEO huddled with Brian Deese, chair of the National Economics Council on March 22, the records show. They met in the White House’s Ward Room along with Chevron’s Karen Knutson and State Department officials Amos Hochstein and Laura Lochman.

Two days later, Wirth and Knutson met with Steve Ricchetti, a counselor to the president and a longtime member of Biden’s inner circle, the records show.

The visitor logs, which detail in-person interviews with White House officials, offer a glimpse into how outside interests are attempting to shape Biden administration policies and reveal which energy executives and environmental advocates are getting access to the president’s top aides.

They show which environmental leaders have met with White House climate adviser Gina McCarthy; which utility executives scored a sit-down with Biden; and which groups have the ear of Ali Zaidi, the Biden aide who’s expected to step in for McCarthy when she exits.

Any goodwill established during the Chevron CEO’s meetings with Biden’s senior advisers in March didn’t last into the summer.

As gas prices soared, Biden sent a letter to oil executives in June, telling them their profit margins were unacceptable. Wirth replied with a letter criticizing Biden’s “political rhetoric,” to which Biden responded by calling the Chevron CEO “mildly sensitive.” A subsequent meeting between oil executives and Energy Secretary Jennifer Granholm appeared to lessen the tension, at least publicly (Greenwire, June 24).

Chevron declined to comment on what was discussed at the meetings earlier this year, and a White House spokesperson did not respond to a request for comment.

“Chevron is committed to continuing our engagement with members of the Administration and Congress on enhancing domestic energy supply. As per our long-standing policy, we do not discuss specific meetings with government officials,” Chevron spokesperson Bill Turenne said in an email.

Woods was invited to the White House for a March 21 meeting with Biden as part of a large gathering of energy and business leaders. Woods also met with Deese on March 22 along with Exxon’s Ken Freeman, the records show.

Utility leaders have also visited the Biden White House this year. The president hosted a group of utility executives on Feb. 9 to discuss the president’s climate policies, including his goal to achieve a zero-carbon electricity grid by 2035.

McCarthy hosted a group of environmental leaders in the Old Executive Office Building on March 24 to discuss the status of the administration’s environmental justice and climate change agenda, according to a person familiar with the meeting. That person was granted anonymity to discuss the private conversation.

Some of those same environmental leaders attended a separate meeting with McCarthy last October to discuss the administration’s climate goals (Greenwire, May 23).

House Republicans have previously criticized McCarthy for meeting with an NRDC leader in the White House. House Oversight and Reform Committee ranking member James Comer (R-Ky.) argued that McCarthy appeared to be violating her ethics pledge by meeting with representatives from NRDC, where McCarthy worked before she joined the administration. A White House spokesperson said that meeting with NRDC as part of a larger group was within the bounds of McCarthy’s ethics pledge (E&E News PM, April 28).

Representatives of the group Protect Our Winters Action Fund and winter athletes “shared their personal climate stories from the mountains and winter sports venues worldwide,” said Lora Bodmer, a spokesperson for the organization that links climate change to its impact on winter sports. Participants at that meeting included Olympic gold medalists David Wise, a skier, and snowboarder Kaitlyn Farrington.

White House officials provided general updates on issues like methane leakage, automotive emissions and Biden’s legislative climate agenda, Ladislaw said in a statement. “We updated them on the work we’re doing in the U.S. — mostly focused on engaging with leading states, engaging the Hill and trying to focus on the regional clean energy economic development work.”

Zaidi is expected to take the helm of the White House’s climate policy office when McCarthy departs. She was reportedly preparing to leave the administration earlier this year, but appears to have delayed that move as the administration expanded its executive climate actions and as congressional Democrats hammer out a deal on sweeping climate legislation.