Meet the man behind the Heritage energy budget proposal 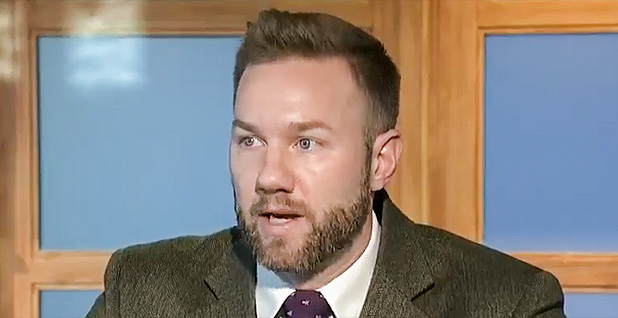 When Nick Loris started sketching out budget proposals for the Department of Energy in 2012, he didn’t realize his theories would actually go into practice.

Now the 33-year-old Heritage Foundation policy analyst’s work might be the key to the Trump administration’s energy strategy.

"It’s fun," said Loris, an energy and environmental policy fellow at the conservative Washington-based think tank. "We certainly are writing what we’re doing for a purpose, and that’s to, in terms of energy, create a more market-oriented energy economy that works more efficiently and protects taxpayer dollars and rewards innovation."

The Heritage Foundation is poised to have a major role in President Trump’s federal budget, and its small-government focus means big cuts are in store across federal agencies (Energywire, March 7).

More than 30 Heritage staffers were part of the Trump transition team, and several now work at the White House, including Loris’ boss at Heritage, Paul Winfree. Former Sen. Jim DeMint (R-S.C.), the president of the Heritage Foundation, met with Trump at the White House this week.

Observers, analysts and career staffers at federal agencies are desperately trying to figure out where the Trump administration is setting its funding priorities. For climate researchers, clean energy startups and power plants whose work is funded by DOE, Loris’ work on a conservative take on the agency could foretell their future.

Quotable and telegenic, Loris is a frequent sight in climate and energy discussions in Washington, D.C., bringing an articulate conservative voice to discussions on what the government should or should not do in the energy sector.

He completed his undergraduate degree in economics in 2006 at Albright College near his hometown of Quakertown, Pa. He then completed a master’s degree in economics at George Mason University in 2008 and received a Charles G. Koch Charitable Foundation fellowship, which then placed him at Heritage. He’s now worked there for more than nine years.

Loris has been on shows like BBC’s "Newsnight" to discuss the Paris climate change accord and on CNN’s "Crossfire" to debate Bill Nye the Science Guy on climate change. He also had a cameo in Leonardo DiCaprio’s climate change documentary.

On Capitol Hill, he’s the Republicans’ go-to guy on DOE’s budget, having testified before Congress seven times. He will do so again before the end of the month at a hearing on wasteful DOE programs.

But his most impactful work may be his lower-profile efforts on policy papers.

Getting the government out of the markets

Since his first foray into DOE’s budget, he has co-authored several policy papers for Heritage, slicing DOE’s close-to-$30-billion budget with his razor-thin view of the role of government.

"None of this is to judge the goodness or the badness of the work that DOE is doing. It very well could be that things like the loan guarantee program are successful in the long run," Loris said this week, before embarking on a visit to a Canadian hydropower plant near James Bay. "Our concern is that they shouldn’t be doing this in the first place."

He argued that there is value in government-funded basic research and facilities like accelerators and light sources at national laboratories, but the federal government loses its bearings when it enters the energy markets, even in late-stage innovation programs like ARPA-E, creating distortions in prices and incentives that cause more problems than they solve.

"I always enjoy seeing first hand the technologies and power sources so I’ve visited a wind facility, a coal mine, fracking sites and offshore oil rig and more," he wrote in an email. "My goal for any of these trips is to learn more about technology and operations but also get a better understanding of if and how the federal government is impeding innovation and competition."

As for an issue like climate change, Loris said he is skeptical about the economic impact of many proposed solutions, like a price on carbon, as well as the scale of their overall effect. This would leave a limited role for DOE in just the basic research around rising average temperatures.

"I do still think there’s plenty of disagreement on how much warming is man-made, how quickly the planet is warming, what a doubling of CO2 emissions will mean for global temperatures," he said. "That’s not to say climate change isn’t happening or that man-made emissions aren’t playing a role. That’s obviously the case."

The White House Office of Management and Budget pushed back on Heritage’s role and insisted that staffers are writing a budget from scratch.

"The budget blueprint is original. It would be premature for us to comment — or anyone to report — on the specifics of this internal discussion before its publication," OMB communications director John Czwartacki wrote in an email. "The president and his cabinet are working collaboratively as we speak to create a budget that keeps the president’s promises."

Nonetheless, many at DOE are taking the Heritage blueprint seriously, speaking of it in hushed tones, and are anxious about the future of their work at the department (Climatewire, March 2).

The energy component of the "Blueprint for Reform" has drawn support from ideologically aligned analysts.

"This blueprint is particularly helpful because I think it does a great job of articulating a conservative vision for what the role of government should be, particularly in research," said Catrina Rorke, energy policy director at the libertarian R Street Institute.

But political trade-offs mean that the actual budget that goes into effect will fall far short of the Heritage blueprint. "I don’t believe we have a high potential for these reforms to materialize in policy, much to my dismay," Rorke said.

Other analysts were critical of the blueprint.

The Information Technology & Innovation Foundation, an innovation think tank that previously collaborated with Heritage and the Center for American Progress on a plan to reform national laboratories, issued a report challenging the prospect of gutting investment in energy innovation.

David Hart, a senior fellow at ITIF, described the blueprint as "an extreme version of what we’ve heard from conservatives for years."

"There isn’t another actor that can take the long-range perspective that the government can," Hart said of the DOE research and innovation portfolio.

And without a price signal from government, the cost of climate change isn’t included in energy choices. "As long as that big externality isn’t taken into account, there is no way to say that costs are fair across different resources," Hart said.

"[A] big point that our [committee] members make is that there’s no such thing as a free market in the energy world," echoed Adam Rosenberg, a Democratic staff director on the House Science, Space and Technology Subcommittee on Energy. "Not only is [the blueprint] not realistic, it is not well-informed or well-advised."

However, Rosenberg cautioned that the Heritage proposal is just that: a proposal. The document that actually matters is the budget the White House submits to Congress, and it’s hard to tell whether the Trump administration will yield to ideological purity or to populism.

"I can only get so worked up before we see something real," Rosenberg said.

For his part, Loris said he is happy where he is and isn’t likely to join his colleagues at the White House.

"I like being at Heritage, because you have a lot of irons in the fire and talk a lot about a lot of different issues in energy and the environment," he said.