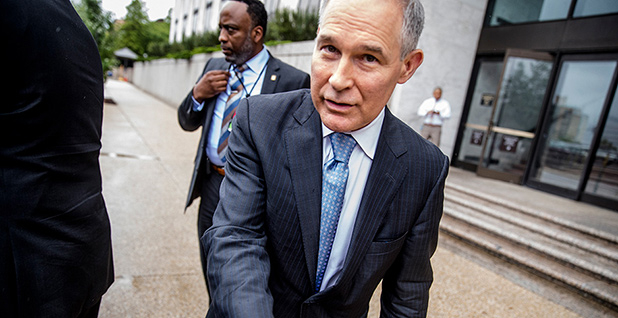 A former House staffer is working behind the scenes on some of EPA boss Scott Pruitt's most controversial projects. Andrew Harnik/Associated Press

One of Scott Pruitt’s most enduring legacies may be the way he curtailed EPA’s use of science.

He didn’t do it alone.

Yamada, the deputy assistant administrator for the Office of Research and Development, is an applied mathematician with a Ph.D. from Cornell University who started in Washington as a fellow with the American Association for the Advancement of Science. Now, he’s working on sweeping changes to the way EPA uses science. Critics, including AAAS, say it will block the agency from using valid research when developing rules to limit pollution.

Yamada is also a bridge between EPA and Rep. Lamar Smith, the Texas Republican who heads the House Science, Space and Technology Committee. The panel generated many of the controversial science reform ideas adopted by Pruitt. Yamada worked on those initiatives as a congressional staffer before coming to EPA. Yamada’s role was revealed through emails and public schedules obtained through a Freedom of Information Act request by the Union of Concerned Scientists and Natural Resources Defense Council.

The policies advanced by Yamada stand to change the way that EPA regulates air pollution, greenhouse gases and chemicals. Pruitt has used the changes to amplify the voices of industry researchers while portraying academics who receive EPA grants as conflicted. Pruitt’s science transparency effort, which bars research that uses private data, like personal health information related to air pollution, was shaped into a proposed rule at EPA by Yamada and other staffers. Critics say it could restrict important studies on air pollution that form the basis of major EPA regulations.

In September, Democratic lawmakers complained that Yamada was ignoring the advice of EPA career staff members, who warned against bringing in industry-affiliated researchers. Some lacked scientific experience, while others had conflicts of interest, the lawmakers said.

Ultimately, they were appointed to agency science advisory boards. Some had worked on research about air pollution health risks that was funded by the American Petroleum Institute. Earlier, Pruitt announced that any board member who received EPA grants had a conflict of interest and could no longer serve in an advisory role. Yamada helped craft that policy, which was criticized by some lawmakers for politicizing the scientific boards.

Democratic Sens. Tom Carper of Delaware and Sheldon Whitehouse of Rhode Island sent a document to the Government Accountability Office detailing Yamada’s connection to the initiative.

"Political appointees at EPA under Administrator Pruitt are disregarding normal procedures and advice from career staff," the lawmakers wrote, referring to Yamada. "By doing so, they are avoiding the procedures put in place by the agency to ensure compliance with federal law and risk undermining the integrity and impartiality of these boards."

Yamada’s work is a critical part of Pruitt’s effort to constrain the agency, said Yogin Kothari, senior Washington representative at the Union for Concerned Scientists. And he might be around longer than his boss if Pruitt is forced from office due to the controversy around his ethical missteps, he said.

"Regardless of whether Scott Pruitt is there or not there, it’s the people he has brought in to dismantle the agency that will remain," Kothari said.

Yamada said science produced by EPA’s Office of Research and Development is an example of taxpayer-funded studies that are publicly available. He said his experience as an applied mathematician taught him that access and sharing of data are crucial to help "inform our best understanding of the science." When asked whether the agency would respond to concerns from science groups and others that the policy would be too restrictive, he said the public comment period is the time to voice concerns.

"The notice and comment period will ensure that the Agency develops the best policy moving forward," Yamada wrote in an email. "EPA welcomes all comments, and will take and deliberate on all these comments seriously."

"Reading the popular press about science in the Trump administration, one cannot help but recall the famous quote about ‘the nattering nabobs of negativism,’" he wrote. "Science and technology have always played a pivotal role in what makes America great, and EPA is constantly advancing this proud tradition by engaging in a continuous, thoughtful conversation about meeting the research needs of the nation. This work has never been more important, as the number of environmental issues facing us is increasing in both scope and complexity."

Some EPA critics see Yamada as a moderating force. Joseph Majkut, director of climate policy at the Niskanen Center, reached out to Yamada about the red-team climate debate, an idea promoted by Pruitt to question mainstream science. Majkut, whose group works to promote acceptance of climate science among conservatives, spoke with Yamada about crafting a red-team exercise in a way that wouldn’t amplify fringe researchers.

"I found Richard to be a really receptive and intelligent guy working in a place that’s obviously not pleasant; it’s hard days to be a well-intentioned political appointee at EPA, for all the obvious reasons," Majkut said.

Before he was shaping policy in the nation’s capital, Yamada was an assistant professor of mathematics at the University of Michigan. In his research, he "focused on developing and testing mathematical models of transcription regulation, merging experimental data, numerical algorithms and theory," according to his EPA biography.

Yamada worked in Washington from 2011 to 2012 as a fellow for the American Mathematical Society and AAAS. He got a firsthand account of how lawmaking and budgets work. The bitter partisan bickering over policy left him unimpressed, he wrote in one AMS publication.

"Most legislation that is proposed is a combination of political kabuki dashed with media theatrics, resulting in no concrete action," he wrote. "Legislation is introduced to raise awareness of an issue, to keep debate on a subject alive, or to make core constituents happy. Serious legislation, however, involves dialogue with all stakeholders, with extensive input and communication from all interested parties."

Critics say that Pruitt has largely ignored the voice of science, and they say Yamada has not heeded the concerns of the groups he once championed, including AAAS. In June, Yamada was included in an email conversation about AAAS and 17 other science organizations that wanted to brief agency officials on the latest climate science. The request was never granted.

Yamada has been willing to meet with members of AAAS, but the red-team debate did not come up, said Joanne Carney, director of the organization’s Office of Government Relations. She said he does consider some input from scientists.

"When I’ve reached out to him, he has been open to talking," she said.

AAAS made clear its opposition to the science transparency plan as it was being developed at the House Science Committee. The agency implemented it anyway.

In contrast, Yamada included the concerns of the chemical industry when crafting the plan. Earlier this year, Nancy Beck, deputy assistant administrator of EPA’s chemicals office, raised pointed concerns to Yamada and other EPA staffers about what a "secret science" policy would mean for regulating chemicals under the Toxic Substances Control Act (TSCA). Beck, a former senior director at the American Chemistry Council, wrote that requiring underlying data to be public would affect pesticide registrations and TSCA implementation, particularly if it did not account for confidential business information, or CBI.

"Yes, thanks this is helpful — didn’t know about the intricacies of CBI — ok, we will need to thread this one real tight! Thanks Nancy!" Yamada wrote in response to Beck’s warning.

The Trump administration’s environmental policy on science will continue under people like Yamada for some time, said Myron Ebell, director of the Center for Energy and Environment at the Competitive Enterprise Institute and the head of Trump’s EPA transition team. Yamada played an important role in some of the most consequential actions taken by Pruitt’s EPA, and his work to reform science will continue even if Pruitt is not there, Ebell said.

"I think he’s very capable; he has a lot of energy; he has a good mixture of a science background with a certain amount of political intelligence," Ebell said. "I think Richard has a bright future, and I think he can be an important political appointee at EPA for a long time."