Meet the man who told Trump climate change is real 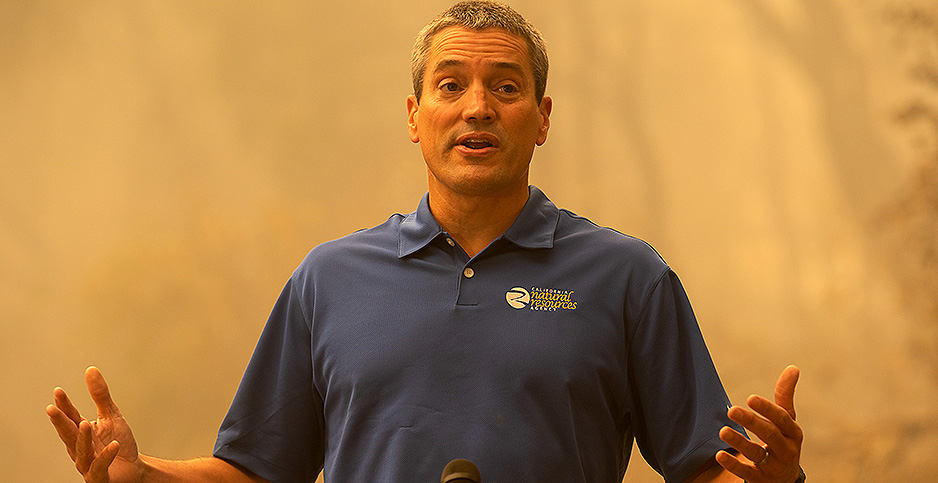 "It’ll just start getting cooler, you just watch," Trump said during a Monday meeting with California officials who were briefing him on the state’s catastrophic wildfires.

Crowfoot, in a response that went viral, responded: "I wish science agreed with you."

Crowfoot, 47, runs the state Natural Resources Agency and oversees 19,000 employees and multiple agencies. His decision to challenge Trump was spontaneous.

"I didn’t plan to beforehand," Crowfoot said an interview.

"I don’t know if it was instinct, or just the intellectual curiosity of actually trying to have a conversation with him on it," he added.

There were multiple points to make on the fires, Crowfoot said, but he believed "the most important conversation to engage him in was climate change."

On the president’s response — regarding climate scientists not knowing about rising temperatures — Crowfoot said he felt "disappointed but perhaps not surprised."

The discussion marked a rare occasion on which Trump received pointed — and accurate — information about climate change. What briefings he may have had in the White House were led by William Happer, a former adviser with the National Security Council who has said the Earth needs more carbon dioxide to grow food (Climatewire, Feb. 28, 2019).

"It seems like it was one of the more direct exchanges that somebody’s had in public with the president on climate change in quite a while," Crowfoot said. "Maybe that’s why it struck a nerve and went viral."

The exchange catapulted Crowfoot into the spotlight. Since Monday, he has appeared on ABC News, CNN, MSNBC and NPR. A clip of his conversation with Trump appeared on "The Late Show with Stephen Colbert" and "The Daily Show with Trevor Noah," though neither mentioned Crowfoot by name.

Crowfoot received more than 250 texts from high school and college friends, some in the middle of the night. His father, James Crowfoot, a retired natural resources professor in Michigan, has heard from students he had 30 years ago. "Is Wade Crowfoot your son?" they ask.

Crowfoot said he sees the attention as a chance to discuss climate change and what’s happening in California.

Crowfoot is a well-known politico in the Golden State. He came to the Gov. Gavin Newsom’s (D) administration from the nonprofit Water Foundation, where he was CEO. Before that, he worked in former Gov. Jerry Brown’s (D) administration as deputy Cabinet secretary and a senior adviser.

He led the administration’s responses to a lengthy drought and dealt with wildfires, a task that took him to many scenes of destruction. He said the sizes of those pale in comparison to the fires raging through California now.

Earlier, Crowfoot worked for the Environmental Defense Fund, and before that as senior environmental adviser to Newsom when he was the mayor of San Francisco.

The effects of climate change have worsened in the Golden State over those years.

"I’ve worked in the [climate] space over 20 years," he said. "Most of us are really alarmed with the acceleration of all climate impacts."

Those who track research didn’t expect these kinds of changes until midcentury, he said. "I’m worried on a personal level like I’ve never been before," Crowfoot said. "This year, the summer, have been a game changer in California."

"I have to say it feels like an existential threat to our way of life and our existence more than it ever has before," he added.

At the same time, Crowfoot says he’s optimistic because of the changes California is making. The state has established a pathway to pursue development in a low-carbon way and, later, with no carbon at all. That will require the expansion of renewable power and electric vehicles. Meanwhile, California’s economic growth has outpaced the national rate by 30%, he said.

Crowfoot examines the science of climate change and its impacts every day, said Kate Gordon, director at the state Office of Planning and Research. She has known Crowfoot for years.

"Our lives since this administration started have been about wildfire … wildfire, mudslides, extreme heat events, reports coming out on sea-level rise. This is something we live," Gordon said. "It’s top of mind for him as it is for all of us."

In California, it’s unusual to find anyone who rejects the science on climate change, Gordon said. Republicans debate the appropriate mandates or adaptation choices, she said, but not whether to act.

"The physical impacts of climate change are so real, in every region, in every sector," Gordon said. "We just do not spend a lot of time arguing the science, usually, here in California. I think that is why it was such a striking moment" between Trump and Crowfoot.

Debbie Franco, senior adviser for water and rural affairs at the state Office of Planning and Research, worked with Crowfoot during the Brown administration, and now through her current role.

Regarding his volley with Trump, Franco wasn’t surprised.

"Wade is always a strong speaker and has a capacity to get to the point in an articulate way that obviously triggered the president," Franco said.