Meet the mining tycoon who texts with Pruitt 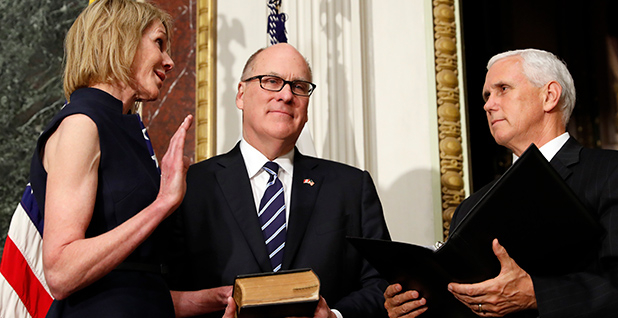 Few coal executives are closer to the White House than Joseph Craft III. The CEO of Alliance Resource Partners LP texts with EPA Administrator Scott Pruitt. His wife serves as the ambassador to Canada. And he is a regular at administration events where the coal industry’s fortunes are at stake.

But the Trump administration was powerless to help Craft earlier this year, when Dayton Power and Light Co. pulled the plug on two colossal power plants along the Ohio River. Craft’s mines fed coal to those plants.

The retirements of the J.M. Stuart and Killen stations left a large hole in Craft’s balance sheet. Last year, his company, based in Tulsa, Okla., shipped 2.5 million tons of coal to those plants, according to federal figures. That accounted for 6 percent of Craft’s coal production in 2017.

"There are other power plants out there, but trying to replace this with others — I don’t want to say it’s impossible, but it’s difficult," said Andy Blumenfeld, who tracks the coal industry at Doyle Trading Consultants, a research firm.

The closures of J.M. Stuart and Killen underline the inexorable issue facing the Trump administration: how to prevent the retirement of coal plants at a time when America is awash with natural gas. It also offers an explanation for the frenzied lobbying in Washington, D.C., where the coal industry has continued to press for a federal lifeline as plant after coal plant shuts down.

Craft is at the center of that effort. But a casual observer might not know his name. Unlike Bob Murray, the cantankerous CEO of Murray Energy Corp., Craft rarely appears in the headlines. The Alliance CEO seldom speaks to the media and keeps a low public profile. Even those within the coal industry said he remains something of an enigma.

Craft’s understated public persona belies his wider influence. He donated $1 million to President Trump’s inaugural ceremonies and $775,000 to his 2016 presidential campaign, according to the Center for Responsive Politics. When Trump signed an executive order rolling back a series of Obama-era environmental policies in March 2017, Craft was there to witness it. Documents obtained in a Freedom of Information Act request show Craft was in touch with Pruitt, the EPA administrator, via text message.

Alliance did not respond to requests for comment for this story. But in a January conference call with financial analysts to discuss Alliance’s quarterly results, Craft was asked about his priorities for the Trump administration. Coal plant closures were clearly on his mind.

"No. 1, let’s protect the fleet," Craft told the analysts before turning his attention to the emission guidelines for new coal plants. "No. 2, let’s look to see if we can’t replace our old — older, inefficient plants with newer, efficient plants so that we can have the lower-cost energy that would still be environmentally acceptable."

The Department of Energy has sought to allay Craft’s concerns. DOE initially proposed compensating coal plants for storing fuel on-site, only to see the Federal Energy Regulatory Commission unanimously reject the plan. The administration is now considering whether to use its emergency powers to keep coal plants open in the name of national security.

Craft’s efforts at DOE have largely been routed through the National Mining Association and the American Coalition for Clean Coal Electricity (ACCCE), which has spearheaded the industry’s lobbying efforts, observers said. His reliance on trade groups reflects the fact that Alliance is a publicly traded company, observers said, noting that Craft appears wary of seeing the firm too closely linked with the machinations of Washington.

Coal industry representatives said Craft is one of many industry voices calling for federal action to save coal plants — and the mines that serve them. They nevertheless singled out the Alliance CEO and Murray as two of the coal sector’s most influential voices in Washington.

"They have been very vocal, and they have been very effective," said Fred Palmer, a former Peabody Energy Corp. executive who now works as a fellow at the conservative Heartland Institute. "The coal industry is lucky to have them in a leadership position."

Michelle Bloodworth, ACCCE president and CEO, said Craft has "certainly been involved" with the organization’s outreach efforts, along with the group’s other members. ACCCE’s membership includes mining firms like Alliance and Murray Energy, rail companies like BNSF Railway and Union Pacific Railroad, and utilities like American Electric Power Co. and Southern Co.

"This is an issue that energizes all of our membership," Bloodworth wrote in an email to E&E News.

ACCCE’s argument mirrors that of Energy Secretary Rick Perry. Both maintain that the continued retirement of coal plants represents a national security threat to America’s electric grid. By ACCCE’s estimate, roughly 40 percent of the U.S. coal fleet has retired or announced plans to shut down.

Often unmentioned in such arguments is the devastating impact of plant retirements on mining firms like Alliance.

Eighteen coal plants with a combined capacity of 13.5 gigawatts are slated for the scrap heap this year (Climatewire, March 15). Together, they consumed nearly 45 million tons of coal from mines across the country in 2017, according to an E&E News review of preliminary figures compiled by the U.S. Energy Information Administration. That is roughly equivalent to losing the combined annual output of the third- and fourth-largest coal mines in America, or about 7 percent of U.S. power-sector coal consumption.

The numbers don’t capture the complete story, however.

In the case of the J.M. Stuart and Killen stations, both power plants were large buyers of the type of high-chlorine coal produced by mines in the Illinois Basin. Finding another buyer for that brand of coal is difficult, analysts said.

Another discouraging sign for the coal industry: Utilities are increasingly walking away from coal plants they invested heavily in. Dayton Power and Light poured more than $600 million in environmental upgrades into the J.M. Stuart and Killen stations around 2008, only to decide a decade later that the plants were uneconomical in a market increasingly saturated by cheap natural gas.

The coal industry has taken notice. In a presentation to the America First Energy Conference sponsored by the Heartland Institute last year, Heath Lovell, an Alliance executive, made an emotional plea to save the U.S. coal fleet.

Noting that he was an engineer by training, Lovell said the steady stream of plant closures prompted a career shift into policy.

Alliance has tried to offset the loss of domestic coal plants by sending more coal abroad. In a recent presentation to investors, the company reported that exports would account for more than 22 percent of its sales in 2018, up from 4.5 percent two years ago. The company’s mining output increased slightly in 2017, and Alliance is now taking steps to reopen a shuttered mine to better serve the international market.

Still, exports are a risky bet for America’s coal producers, a fact underlined by the growing threat of a trade war between the U.S. and the world’s other major economies. Analysts said it’s unclear how long companies will be able to rely on foreign sales in the absence of a stable domestic market.

"It’s something that is keeping them afloat or a bonus, but I wouldn’t characterize it as a foundation of their business," said Chiza Vitta, a coal analyst at S&P Global.

Critics of DOE’s efforts to sustain the coal industry say it’s based in political favor-giving, not economics. They point to FERC’s unanimous rejection of the initial DOE proposal; the commission said the grid does not face an immediate emergency.

"Trump made a promise with no evidence to bring back the coal industry, and it’s not happening, and it’s not going to happen," said David Schlissel, director of resource planning at the Institute for Energy Economics and Financial Analysis, a think tank that favors a transition to clean energy. "We don’t know what they’re going to do or how long it’s going to be for. But what we do know is it’s really not needed. It will be a bailout."

By contrast, the industry’s defenders contend that regulators and grid operators have been slow to respond to a brewing crisis that will be realized if plants continue to close. They note that gas and renewable interests critical of DOE’s efforts have much at stake, as well.

"It’s their bottom line," said Palmer, the former coal executive. "I trust the secretary, I trust the president to do what is in the national interest irrespective of any political relationship."

As for Craft’s efforts?

"I don’t see anything other than vigorous exercise of First Amendment rights," he said.