Meet the most important woman in solar 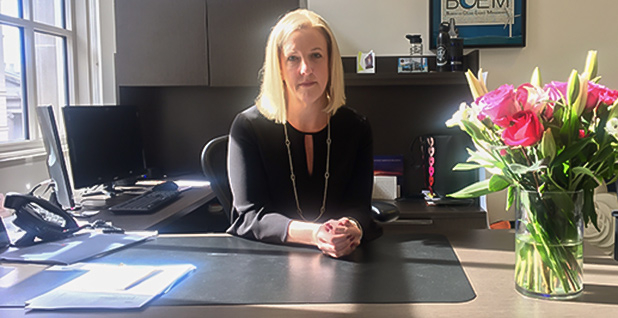 Wherever Abigail Ross Hopper goes, her laptop and cellphone go, too.

"I carry them around as if they were fashion accessories," said Hopper, the president and CEO of the Solar Energy Industries Association, in a recent interview.

That connectivity came in handy last May, when the U.S. International Trade Commission decided to consider a petition by Suniva Inc., a bankrupt solar manufacturer in Georgia, to place tariffs on imported solar cells (Energywire, May 24, 2017).

Hopper was attending the American Wind Energy Association’s conference in Anaheim, Calif., when she got a call about the ITC’s decision.

"I actually changed my trip back so that I could do a webinar with our members to explain the process going forward," Hopper recalled. "Originally, I was supposed to be on an airplane at that time."

Her plans for the next several months drastically changed, too, as the solar industry was thrown into upheaval over the prospect of a global trade war. She emerged as a leading voice on the issue, speaking out against the tariffs and warning that the industry would quickly lose 23,000 jobs.

Last month, President Trump formally signed the tariffs into law (E&E News PM, Jan. 23). But Hopper believes her lobbying against them still had an impact.

"I think through a lot of advocacy and a lot of education and a lot of coalition, there was a better outcome than there otherwise could have been," Hopper said.

"I was not shocked at the final result," Hopper said. "I was definitely relieved that it wasn’t (a) what the petitioners had requested and (b) what the legal limit could be. Of course I wished it was less." But after the ITC ruled in September that imports were causing "serious injury" to U.S. manufacturers, "it was clear that there was going to be some remedy," she said.

Some high-profile people in the energy industry were impressed with her work.

"She clearly has done a phenomenal job at SEIA in a really difficult year," said Lisa Jacobson, president of the Business Council for Sustainable Energy.

"I can only imagine all the strength it took to manage her membership on something as complicated and challenging as the trade case," Jacobson said. "They had clear, straightforward messages in the way they addressed it."

Dave McCurdy, president and CEO of the American Gas Association, also offered praise for Hopper, even though solar and natural gas can be seen as odd bedfellows.

"We’re always glad that we have bright, young leaders coming into the sector that bring important views and are incredibly articulate advocates for their position," McCurdy said. "And Abby represents that."

‘Start with what you agree on’

In the front seat of Hopper’s black BMW lies a Dunkin’ Donuts-themed Pez candy dispenser, a token of her obsession with the chain restaurant.

"It’s my favorite," she said while driving. "Most cities I go to, I could tell you where all the Dunkin’ Donuts are."

She added, "One time when I was in Boston, I drove out to Quincy to go to the first Dunkin’ Donuts store. It was very disappointing because they had one little teeny sign, but I really wanted a shirt or something. I was like, ‘You’re missing such a great marketing opportunity!’"

Other fun facts about Hopper: She likes reading the same young adult novels as her three kids to get a sense of their interests. She stands guard over the trash can on family trips, making sure her family doesn’t throw away anything that could be recycled.

Hopper’s willingness to share these sorts of personal details — and ask others for them in return — has helped her forge relationships in Washington.

"I really personally enjoy working with her," said Julia Hamm, president and CEO of the Smart Electric Power Alliance. "We take our jobs very seriously and are serious about accomplishing what our organizations need to get done. But we also do it in a way in which we have fun."

She’s also willing to reach across the ideological aisle.

In August, for example, she partnered with the right-aligned Heritage Foundation and American Legislative Exchange Council on the solar trade case (Climatewire, Aug. 15, 2017).

The alliance came as a surprise to many observers. ALEC is the conservative boogeyman that helped state lawmakers craft several bills to scrap incentives for rooftop solar installations, and Heritage is the conservative think tank that has played a key role in shaping the Trump administration’s personnel and policy.

Hopper said she gained the groups’ confidence by emphasizing their common grievances with the tariffs.

"Start with what you agree on," she said. "That’s the most important part. And then if and when there’s a time to go beyond that and look for other areas of common interests, you do that."

She added, "People in Washington are pretty strategic about getting the results they want. It’s a lot easier to do that when you’re willing to align with people who share that interest."

Refusing to be ‘pigeonholed’

Much like Hollywood actors, Hopper often gets typecast. "I sometimes get sort of pigeonholed into only having experience in renewable energy," she said. "But that’s far from the case."

Hopper initially wanted to be a lawyer. She studied history at Dartmouth College and attended law school at the University of Maryland — where she met her lawyer husband — before working in private practice for nine years. But after having her third child, she decided to focus on energy issues, and she never looked back.

As an energy adviser to Maryland Gov. Martin O’Malley (D) from 2010 to 2015, Hopper had a broad portfolio, including nuclear and natural gas. She dealt with the permitting of several natural gas pipelines as well as a liquefied natural gas export facility.

"She has an understanding of many of these issues, coming from Maryland and being an adviser to Gov. O’Malley," said Hoskins, the chief policy officer of Sunrun and former commissioner of the Maryland Public Service Commission.

From 2012 to 2015, Hopper concurrently served as director of the Maryland Energy Administration. Then in 2015, President Obama tapped her as the second-ever head of the Interior Department’s Bureau of Ocean Energy Management, where she oversaw nearly 600 employees and 1.7 billion acres of federal waters. Offshore wind and offshore drilling both emerged as hot topics.

"Whether or not we should drill in our waters is obviously an incredibly important question that people feel really strongly about," Hopper said. "So it was a fun place to be because I was right in the middle of those conversations."

Today, Hopper keeps a poster that reads "BOEM" on the wall in her office. The letters are made up of hundreds of tiny photographs. The memento — a parting gift from her staff at the agency — serves as a reminder of where she came from.

So after gaining experience across the energy sector, why pick solar?

"Honestly, I think it’s the most exciting technology source in the energy space," Hopper said. "It’s incredibly innovative. It’s growing quickly. There’s widespread support for it. The future is unlimited — especially when you think about how we pair it with storage."

With the solar trade case in the rearview mirror, what’s next on SEIA’s agenda?

The U.S solar industry, after at least six years as a net job creator, lost almost 4 percent of its jobs last year, according to a recent Solar Foundation report (Energywire, Feb. 7).

Hopper said she wasn’t discouraged by the small decline in employment. She had expected it because of the uncertainty over the trade case.

SEIA still forecasts that the industry will add more than 10 gigawatts of capacity in 2018. And taking a page from Trump, the trade group plans to make jobs a central part of its messaging.

"From where I sit, the rhetoric around jobs and job creation is louder than even energy dominance," Hopper said. "So we talk about jobs."

"Washington can seem like a pretty partisan town sometimes," Hopper said at the event. "But over the last year, solar employment grew faster in red states than it did in blue states."

Out of five panelists at the event, Hopper was the only woman.

Asked about the gender imbalance, she steered the conversation back to jobs, saying diversity is crucial in the solar workforce.

"I feel incredibly strongly about the need to have women, people of color, and people of all different ages and experiences," she said. "It has to happen. But it has to happen with intentionality. That’s the only way it will happen."