Meet the next generation of climate influencers 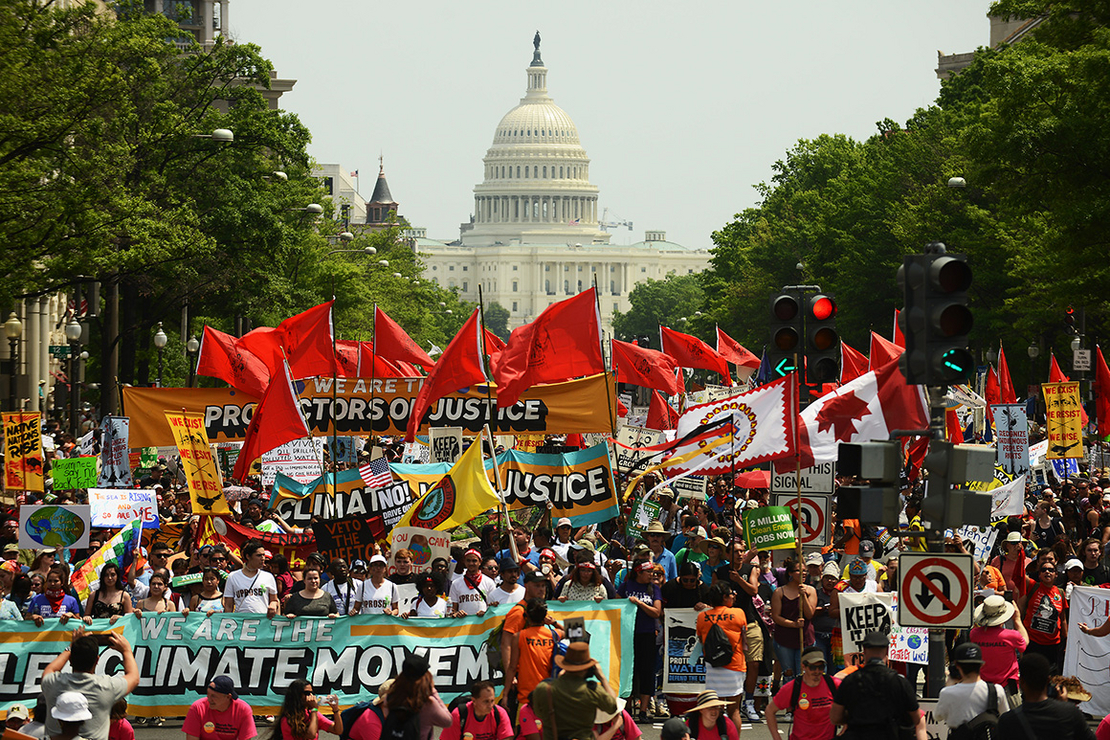 Activists marched from the U.S. Capitol to the White House on April 29, 2017, to protest U.S. environmental policies. Astrid Riecken/Getty Images

These three luminaries are among 16 artists and influencers Harvard University highlighted last week as part of the school’s effort to call attention to content creators who are inspiring social change and fighting climate misinformation.

The list was created by Harvard’s Center for Climate, Health and the Global Environment in partnership with Pique Action, a media company focused on climate storytelling. One goal of the campaign is to provide a counterbalance to the despair that often can accompany a relentless diet of negative climate news, much of it from social media.

“It can be a challenge to find climate content that’s actually entertaining and educational,” said Kip Pastor, CEO and founder of Pique Action, in a press release. “We built this list so that more people can benefit from the solutions-oriented content that these creators are making and to bring their work to a wider audience.”

E&E News spoke with three of the 16 social media activists. Here are their stories:

Kristy Drutman, 26, started her Instagram page three years ago because she didn’t see great representation of people of color in environmental spaces, especially in her field of science communication.

Now, with a following of more than 58,000 people, she circulates information about green jobs, promotes intersectional environmentalism and breaks down issues such as climate financing. Drutman, who is of Jewish and Filipino heritage, said her page really took off amid racial justice protests in 2020, when people began to search for more diverse and inclusive content creators.

She is also the creator of Brown Girl Green, a media platform and podcast committed to promoting diversity and inclusion in the environmental field. She said her business, as well as her Instagram page of the same name, is about “empowering people to feel like they can also be included in the conversation.”

While studying for a Ph.D. in atmospheric physics at Oxford University, Levy noticed a gap between climate research and public conversations about the environment. To fill this gap, they started creating comedic sketches on their YouTube channel, ClimateAdam, breaking down climate-related news, such as newly released climate reports and what net-zero emissions really means.

“I wanted to share our climate understanding as wide as possible, and embracing everything about YouTube (from the playfulness to the visual style) seemed like a great way to reach new people,” Levy said.

Their most recent video covers the non-climate impacts of carbon dioxide. “This might come as a surprise coming from a climate scientist, but I love carbon dioxide,” Levy begins before explaining how the gas is essential for many aspects of life.

In addition to running the channel, Levy works as a science journalist in Berlin.

Two years ago, Doria Brown noticed a lack of climate content created by people working in climate-related fields. An energy manager, she purchases energy for the city of Nashua, N.H., and is working to increase the city’s use of renewable energy.

So in June 2020, she decided to harness her knowledge to create upbeat, educational videos about energy, sustainability and science communication on TikTok.

Under the name Earth Stewardess, the 27-year-old dances, lip syncs and promotes a sustainable lifestyle for her 42,000 TikTok followers. A week before Christmas, she created a video about how to make compostable holiday decor out of oranges.

“It’s mostly activists who have amazing ideas and passion but not professional experience in problem solving [creating content],” Brown said. “So I saw an opportunity to share my experience in the sustainability field.”

Brown said one of her long-term goals is to attend Harvard University for graduate school, so she said being recognized by the institution gives her confidence to continue pursuing her dreams.

Genesis Butler, 15, is an animal rights activist who promotes vegan, “climate-friendly” living on her Instagram and YouTube accounts. At age 10, Genesis became one of the youngest people to give a TEDx talk and now boasts over 65,000 followers on Instagram.

Xiye Bastida, 19, is a climate justice activist and University of Pennsylvania student who recently spoke at the COP 26 U.N. climate conference in Glasgow, Scotland. Based in New York, she is a lead organizer for Fridays for Future, a youth climate strike movement.

Jack Harries is a filmmaker and climate storyteller making “solutions-focused documentaries” for his 3.7 million YouTube subscribers. With 1.3 million followers on Instagram, he is the co-founder of Earthrise Studio, a creative studio and media platform promoting climate advocacy.

Dr. Peter Neff’s 163,000 TikTok fans can follow his adventures conducting ice core research in Antarctica. An assistant research professor at the University of Minnesota, his research focuses on recent changes in the coastal regions of West Antarctica.

Sophia Li is a journalist, filmmaker and “climate optimist” discussing topics from sustainable fashion to coping with climate anxiety. She can be found on Instagram and Twitter.

Carissa Cabrera combines her passions for protecting marine species and digital storytelling to make “marine conservation accessible for everyone.” She is the CEO of the The Conservationist Collective, an environmental media company in Hawaii, and can be found on Instagram and TikTok.

Rollie Williams is the creator of Climate Town, a series of videos meant to educate and entertain on topics about climate change. A climate science graduate student at Columbia University, Williams aims to “get more people comfortable talking to others about climate change without feeling embarrassed or uninformed.”

Ross Reid, storyteller and nature lover, takes his TikTok into the forest to learn about the various species living there and how best to protect them.

Alaina Wood breaks down climate-related news on Instagram and TikTok to fight misinformation and does weekly recaps of goods news on global warming to combat “climate doomism.”

Kayla Anderson posts brief informative videos on topics such as wind turbines and nuclear power for her 12,000 followers on TikTok.

Correction: A previous version of this story used incorrect pronouns to refer to Adam Levy.