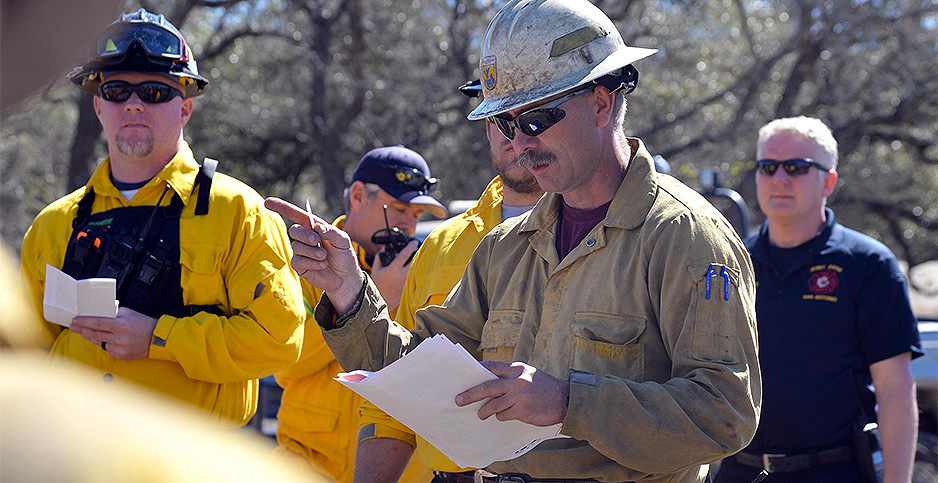 Carl Schwope gives instructions to firefighters before the start of a controlled burn in Texas. Schwope is currently FWS's incident commander for the coronavirus pandemic. David DeKunder/Defense Department

But even years of experience can admit unpleasant surprises.

"When I came up here, we really didn’t know where this was going to go or what this was going to look like, short term or long term," Carl Schwope, fire management officer at Balcones Canyonlands National Wildlife Refuge, said in an interview. "We’re learning that every day."

The 48-year-old Schwope, who joined the Fish and Wildlife Service in 1994, is the federal agency’s designated incident commander for the pandemic. That’s put the Southwest Texas State University graduate in the middle of endless meetings and some tough calls.

He and Terrina Harford, FWS chief of emergency management and physical security, have been in the trenches together for weeks.

"I had an intuition that I was in for an adventure," Harford, in an interview, said of her expectations when she first joined the agency. "And boy, was I."

A 40-year-old former Navy intelligence officer, Harford joined FWS in 2016 after working for the Interior Department’s Bureau of Safety and Environmental Enforcement and for the consulting firm Booz Allen Hamilton.

Harford holds a permanent position, while Schwope is scheduled to rotate off the grueling incident commander post Friday. He cautioned that it’s premature for a rear-view mirror examination of lessons learned from the unfolding crisis in which more than 2,400 U.S. residents have died.

"It’s still early in this incident; we’re still maybe in the reactionary stage," Schwope said, adding that as the virus-caused COVID-19 disease "increases across the country and as the case rate increases, as the death rate increases, it’s telling us what to do."

FWS Director Aurelia Skipwith is "working about 70 to 80-plus hours a week currently, with most of that [involving] COVID response work," agency spokesperson Brian Hires said.

With its preset protocols and lines of authority, the Incident Command System provides further structure for coping with the Fish and Wildlife Service’s 560-plus refuges that in a normal year draw more than 53 million visitors (Greenwire, March 18).

Schwope, for one, earned his spurs on an array of incidents that date back to the likes of Hurricane Ivan in 2004, which devastated swaths of Florida and Alabama and caused an estimated $20.5 billion worth of damage in the United States.

"I’ve been on hurricane assignments, both from an incident management team realm … and from the Fish and Wildlife Service side, where the hurricane impacts our stations," Schwope said, adding that involves "putting a team together to secure and stabilize the local infrastructure."

A sneakier kind of havoc tested Harford after she began with FWS in 2016.

That year, a New World screwworm infestation ran like wildfire through the Key deer population in Florida’s 9,200-acre National Key Deer Refuge. Researchers estimated some 133 deer died as a result, out of a herd of about 875.

"That was an interesting one," Harford said, adding that "some of the things we saw then, we’re seeing now. It was a situation where we didn’t know how long it was going to go on for … that is very similar to what we’re experiencing now, the uncertainty."

Tough calls in a teleworking world

A daily report summarizes the roller coaster over the past 24 hours. Visitor centers close and events cancel. Refuges remain open while some national parks shut down. The Chattahoochee Forest National Fish Hatchery in Georgia and some similar facilities keep operating for this fish’s sake but end public access.

"Those are typically crowded and guided by tours," Schwope said, "and so it’s hard to maintain social distancing."

Even the timing of the meetings reflects the evolving virus-driven work environment.

Late last week, the FWS team pushed back its morning session to 10 a.m., as the National Park Service shifted its own emergency management team meeting from 9 a.m. to 8:45 at the recommendation of the information technology officials who were seeing networks inundated.

"One of the reasons was IT said, hey, everyone is having their meetings at the top of the hour," Harford said.

Coordinating moves across agencies can be an even trickier challenge.

As part of Oregon’s March 23 stay-at-home directive, for instance, the state closed its parks. Schwope said that, to keep federal and state policies aligned, FWS officials considered shutting down the 18 national wildlife refuges in the state.

"But then, talking to the governor’s office and some other folks, it seemed like, no, we’ll go ahead and keep the refuges open," Schwope said. "That was a tough decision to make at this level."