Meet the other Republican who wants a carbon tax 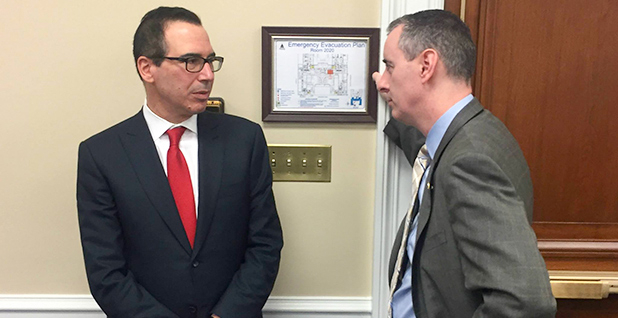 Environmental politics don’t often sway elections, but a House race in Pennsylvania could be an exception to the rule.

At stake is a Philadelphia-area district held by freshman Republican Rep. Brian Fitzpatrick, a former FBI agent and brother to ex-congressman Michael Fitzpatrick, who used to represent the region.

The seat is almost evenly split between Democrats and Republicans, and the rhetoric and record of the incumbent reflect that close divide.

The GOP lawmaker voted last year against a Republican plan to replace the Affordable Care Act, and he made national news earlier this month when he suggested on NPR’s "All Things Considered" that Russian President Vladimir Putin was manipulating President Trump.

Notable, too, is that Fitzpatrick has made it tough for Democratic challenger Scott Wallace to make inroads on issues such as climate change, because of an environmental voting record that’s tops among House Republicans, according to the League of Conservation Voters.

Fitzpatrick landed a 71 percent rating on the group’s 2017 scorecard, and the League of Conservation Voters Action Fund so far has declined to endorse anyone in the race — helping Fitzpatrick to neutralize what otherwise could be a difference-making issue.

"This could be a 1- or 2-point race," said Robin Kolodny, chairwoman of the political science department at Temple University in Philadelphia. "We could be counting [the results] for days."

She said the core of the seat, centered in Bucks County, has a history of supporting moderate Republicans, and that many of the voters who live there see protecting the environment as more than just a lofty goal.

"Part of what drives that district economically are things like the Delaware Water Gap and [the tourist magnet of] New Hope and beautiful environmental things," Kolodny said. "If I were Brian Fitzpatrick, I would do anything I could to show I still have the values of a Bucks County voter — which is pro-business but environmentally conscious and socially open-minded."

To that end, much of Fitzpatrick’s attention has focused on the contamination of drinking water linked to firefighting foam used at military bases.

It’s a nationwide problem but one that has become a major issue among residents in southeastern Pennsylvania, where perfluorinated compounds have tainted the drinking water of an estimated 70,000 local residents, according to the Bucks County Intelligencer.

"People around that area are very concerned," Fitzpatrick said in an interview. "It trumps every other issue for them."

Fitzpatrick has pressed EPA and the Defense Department on the problem, and in June, he called for the resignation of then-EPA Administrator Scott Pruitt after it was revealed that White House and EPA officials sought to keep under wraps a study that showed perfluorinated compounds were more dangerous than previously believed (E&E Daily, June 12).

"He’s been troubling to me for a long time," said Fitzpatrick of the since-departed EPA chief. "Putting someone in the EPA like Scott Pruitt sends the wrong message. It’s a huge mistake. We need somebody who believes in environmental preservation and understands the threats of climate change."

Fitzpatrick’s attitude on climate change has put him at odds with other Republicans. He joined with House Democrats and a small group of GOP lawmakers last year in opposing a proposal that would have undercut efforts by the Defense Department to prepare for the effects of climate change.

And he was one of only six Republicans this month to vote against a resolution by House Majority Whip Steve Scalise (R-La.) that described carbon taxes as "detrimental" to the U.S. economy (Greenwire, July 19).

Days later, Fitzpatrick was the first co-sponsor of a bill by Rep. Carlos Curbelo (R-Fla.) — another endangered GOP incumbent — that laid out a plan to help mitigate climate change by slapping a $24-per-ton levy on carbon emissions.

"One of my goals here is to create an atmosphere where there’s two pro-environmental parties," Fitzpatrick said. "I want to help change the face of the GOP when it comes to the environment."

Fitzpatrick’s record, however, has come under fire from Wallace, a former Capitol Hill staffer and a past co-chair of the Wallace Global Fund, his family’s philanthropy.

The Democratic candidate described efforts such as the Curbelo carbon tax bill as nothing more than glorified press releases.

The measure is "not going anywhere, but it lets a couple of Republicans campaign with a veneer of moderation," Wallace said. "It’s an empty gesture aimed at one particular day — Nov. 6," or Election Day.

He added that Fitzpatrick’s high score with the League of Conservation Voters belies a voting history that often has been unfavorable to the environment.

Among the positions by Fitzpatrick that he cited were one vote in favor of a bill that would make it harder to press environmental protection cases in federal court, and another that would delay or block the implementation of federal regulations — including those for health and the environment — by requiring congressional approval of any rule expected to cost the U.S. economy $100 million or more.

"Talk is cheap," Wallace said. "The talk doesn’t matter nearly as much as what [Fitzpatrick] does."

Wallace described himself as one of the "greenest candidates ever to run for Congress" and said he would support legislation that would put the United States on the path toward 100 percent renewable energy use by 2050.

The Wallace Global Fund, which he helped lead, lists climate change as one of its biggest issues. A priority of the group, according to its website, is to "break the fossil fuel cartel" and "invest in climate solutions."

Wallace has plenty of money to back up his environmental platform. The Democrat so far has loaned his campaign more than $4.8 million, according to federal election records.

His big war chest, coupled with the district’s political makeup, has put the race on the radar of election analysts. Inside Elections and The Cook Political Report both see the race as close, though each gives an edge to Fitzpatrick.

A poll released in June by Monmouth University found that the 451 Pennsylvania voters it surveyed gave Fitzpatrick a 49 percent to 42 percent advantage, though the pollsters projected it would be much closer in the event of a Democratic midterm surge.

"This Bucks County seat is a true swing district: it voted for Hillary Clinton 49 percent to 47 percent in 2016. It’s the kind of seat that should be atop Democrats’ target list in a wave," wrote David Wasserman, a House race analyst, recently for The Cook Political Report. "But Bucks also has a strong local identity, and the Fitzpatrick family has succeeded in building a strong, moderate brand."