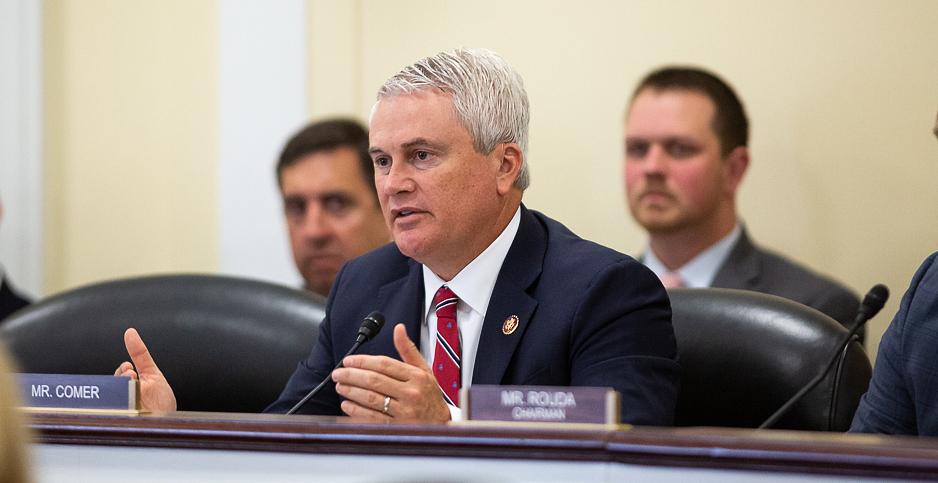 At first glance, Rep. James Comer might seem like an odd choice to lead the Republican defense of the Trump administration on Capitol Hill.

The Kentucky GOP lawmaker, 47, is known to command respect from Democrats, and many doubt he wants to stay in Congress for the long haul.

Comer’s new role as ranking member of the House Oversight and Reform Committee follows partisan brawlers who previously held the job, including Mark Meadows (R-N.C.), who is now White House chief of staff.

And although Comer represents the overwhelmingly pro-Trump 1st District, which covers the southwestern parts of the state, observers wonder how an affable Southern conservative will navigate the punchy role.

To be sure, Comer is a staunch conservative Republican who has publicly extolled President Trump and his administration.

Already, as ranking member, he sent dozens of letters to oil, gas and coal lobby groups to ask how the federal government can ease burdensome regulations beyond, as he put it, "already historic deregulatory actions" (Greenwire, July 17).

In a recent interview, Comer explained in general terms how he saw his new job: It’s a role to root out "waste, fraud and abuse" in the bureaucracy.

"From a macro standpoint, I would really like to see the Oversight Committee go back to what it was created to do, to provide oversight and accountability to the federal government," said Comer, who until earlier this year served as the ranking member of the Environment Subcommittee.

He complained that his Democratic counterparts often turn the investigative committee into political theater, fruitlessly attacking Trump officials and corporate executives. Republicans, when they controlled the House, also used the panel to go after their opponents.

"As a farmer I want to see a pro-environment agenda, but at the same time you can’t overregulate these companies for the sole sake of going on MSNBC and patting yourself on the back," Comer said.

"You’ve got to try to have clear objectives that are achievable. I think a lot of these committee hearings just turned into shouting matches at CEOs of big companies for bad behaviors two generations ago."

Yet he said he would not try to block the Democrats from holding hearings to probe EPA, calling it "bipartisan to want to support anything that would provide clean water."

Last year he visited the San Onofre nuclear waste site with Rep. Harley Rouda (D-Calif.), who chairs the Environment Subcommittee, as well as Rep. Mike Levin (D-Calif.). Comer has called on the administration to prioritize the issue.

And despite his pro-Trump rhetoric, Comer has a reputation for being more of a defender of the rural South than of the national GOP, observers said.

Born in Tennessee, Comer received a bachelor’s degree in agriculture from Western Kentucky University in 1993.

A biography says he borrowed $120,000 to start his own farm. Now, the biography says, Comer Family Farms is one of the largest in south-central Kentucky.

Comer was state agriculture commissioner from 2012 to 2016, promoting the legalization of hemp at a time when Kentuckians considered that to be political suicide for a Republican.

"He is someone who likes to lead, he likes to be out front," said Steve Robertson, former chairman of the Kentucky Republican Party.

"He’s an extremely personable individual," Robertson added. "At the same time there is a lot going on in that head of his, and if you ever for a moment think he’s not following you, you have probably made a mistake because he’s probably two or three steps ahead."

The news that Comer had been chosen to be Oversight ranking member surprised some Kentucky pundits because they assumed he would rather run for governor in 2023 than ascend congressional ranks.

"He would not have been the traditional Washington insider choice to take on this role, but I think his past, his experience, where he has been, has prepared him to perform well in that spot," said Tres Watson, a Republican political consultant in the Bluegrass State.

Comer lost the 2015 GOP primary for governor to Matt Bevin by a mere 83 votes. Bevin went on to win the general election but was soundly defeated in 2019 by Democrat Andy Beshear.

Yarmuth said he texted Comer on election night 2019 to say, "I don’t think there’s a happier person in Kentucky than you." Yarmuth always thought Comer wanted to be governor more than in Congress.

In some ways, however, Comer is a good fit for the GOP Oversight role because he is in a safe congressional district of sprawling farmland and vanishing coal mines.

Although registered Democrats have a nearly 2-to-1 edge over registered Republicans in Kentucky, the Democrats there are socially conservative and have consistently sent Republicans to Washington.

Comer fit the mold well. At a young age, his grandfather dragged him to political events, and he "caught the bug," recalled Robertson. He later joined Future Farmers of America and was elected to the state Legislature at age 29.

"He’s got a real sense of old-school politics," Robertson said. "He’s an organizer. He likes to build a deep bench behind him. There are not too many fights or encounters that he wants to head into without a lot of people behind him."

One of the people behind him was coal magnate Joe Craft. Craft and his wife, Kelly Craft, now the U.S. ambassador to the United Nations, joined him on stage when he launched his 2015 gubernatorial campaign.

The pair spent $500,000 on what appeared to be a pro-Comer political action committee, Kentuckians for Growth, Opportunity & Prosperity, according to the National Institute on Money in Politics.

Since Comer lost the race, some observers have speculated the Crafts and Comer are not quite as close as they once were.

The congressman’s spokesman, Matt Smith, called Joe Craft a friend of Comer’s and "one of the largest employers in our congressional district."

Coal remains a major player in his district, even as it struggles in the face of prevalent, cheap natural gas.

Comer acknowledged "the industry is facing very hard times, and it probably will never be at the levels it was 20 years ago. But I think there is a future for coal."

More broadly, Comer said the government should strike a balance working with industry and tackling climate change — an issue that he thinks voters care about. He does not support abolishing EPA like some of his Republican colleagues.

"I think we could have an EPA that works closely with the private sector," Comer said. "The private sector is going to have to play a huge role in any type of climate change policy in the future, and when [the Democrats’] whole focus is to attack the private sector and then the administration that is in charge of the EPA, you are not going to achieve anything."

Comer dismissed those efforts, saying, "I don’t think very many of the Oversight hearings with respect to the environment have been productive at all." Instead, he said his primary goal will be to simply "find unnecessary spending."

Yarmuth, though, does not envy him. "His constituents overwhelmingly support Trump, and that forces him to be more deferential — this is my assessment — to Trump than he would like to be," Yarmuth said. "I think it’ll be kind of a thankless job for the next few months for Jamie."