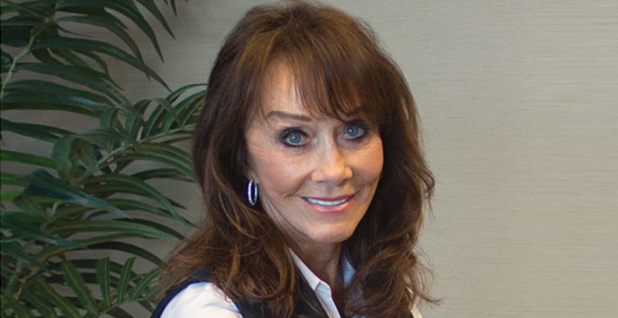 The Republican super donor who bolstered former EPA Administrator Scott Pruitt’s legal defense is one of the richest women in America, known for shoveling millions of dollars into GOP causes.

Billionaire Diane Hendricks of Beloit, Wis., gave $50,000 to help pay for Pruitt’s legal expenses, according to the last financial disclosure report he filed as EPA chief.

Hendricks is the chairwoman and co-founder of ABC Supply Co. Inc., one of the largest wholesale distributors of roofing in the country. In addition, she controls Hendricks Holding Co. — which has companies in insurance, construction, manufacturing, recycling and pharmaceutical research — as well as more than 25 million square feet of commercial real estate in the United States.

In 2018, Forbes listed her as No. 1 among America’s "richest self-made women," estimating her wealth at $4.9 billion. Her company, which she co-founded with her late husband, Ken, has more $9 billion in sales.

The New York Times reported this summer on her effort to revitalize Beloit, spending millions to buy and redevelop buildings and factories that have fallen out of use.

"I see old buildings, and I see an opportunity for putting things in them," she told the newspaper.

Hendricks is also a prominent Republican booster. A supporter of President Trump, she was named to his economic advisory council for the 2016 campaign.

She’s also part of the network of Koch donors that supports GOP candidates. She gave $4 million in the 2016 election cycle to the Freedom Partners Action Fund, a Koch-aligned super political action committee.

As Oklahoma attorney general and later as EPA chief, Pruitt was considered an ally of the Koch network.

The nearly $13 million Hendricks contributed to outside political groups in the 2016 election cycle ranked her No. 16 in the country, according to OpenSecrets.org. She was ahead of Charles Koch but trailed behind Tom Steyer and Sheldon Adelson.

Despite her widespread GOP support, Hendricks does not appear to have contributed to Pruitt’s political campaigns or leadership PACs above thresholds that require disclosure, according to campaign finance records.

She did contribute to a Pruitt ally and fellow Republican, West Virginia Attorney General Patrick Morrisey, who joined Pruitt in peppering the Obama-era EPA with lawsuits. Hendricks contributed $1,000 to Morrisey’s re-election campaign four days before the 2016 general election.

At EPA, Pruitt — considered an ambitious politician looking to run for office again — was often quick to respond to Republican donors’ wishes. He met with an Israeli air-to-water company at Adelson’s request, which was later rewarded with an EPA research deal (Greenwire, March 28).

Pruitt set up the legal defense fund after investigations into his tenure at EPA began to pile up. Pruitt resigned this July facing allegations that he had misused his public office.

Messages left at Hendricks’ companies asking for comment for this story were not returned.

On Pruitt’s termination report, which was released yesterday, senior EPA ethics official Justina Fugh noted that the former administrator had not sought ethics advice about Hendricks’ donation. EPA ethics officials learned of the contribution only after seeing it on Pruitt’s report when he filed it.

It is also not clear when Hendricks made the contribution, although it happened while Pruitt was still at EPA. His report covers his finances for the 2018 calendar year up to the day he resigned in early July.

Under a legal advisory issued by the Office of Government Ethics this September, federal employees can accept contributions to pay for legal expenses as long as they are in line with ethics rules.

"Prohibited sources" for those contributions could be individuals or businesses that could be affected by the employee’s agency. In addition, ethics officials should provide advice and counseling to employees so they can avoid those barred gifts.

"That burden is on the employee to seek that ethics advice before accepting that gift," said Delaney Marsco, ethics counsel for the Campaign Legal Center, adding EPA ethics officials "do have the responsibility to conduct due diligence, but they can only do so much. Pruitt’s Pruitt."

Marsco said given Hendricks’ vast business interests, she likely could be subject to EPA rules.

"My thought is she could be a prohibited source under the gift rules," Marsco said. "It is easy to see how environmental regulations or lack thereof would have a substantial impact on her industry of supplying construction materials."

Pruitt’s own lawyer had that same concern.

Cleta Mitchell, a partner at Foley & Lardner LLP and the trustee of Pruitt’s legal defense fund, was worried about the regulatory reach of EPA and how it could impair Pruitt’s fundraising for his defense. She expressed that "there is a ‘fear’ that ‘everything is someday, somehow going to be subject to the EPA,’" according to OGE records (Greenwire, Oct. 4).

Mitchell didn’t respond to questions from E&E News for this story.