Meet the Senate enforcer who could sink Biden’s climate plan 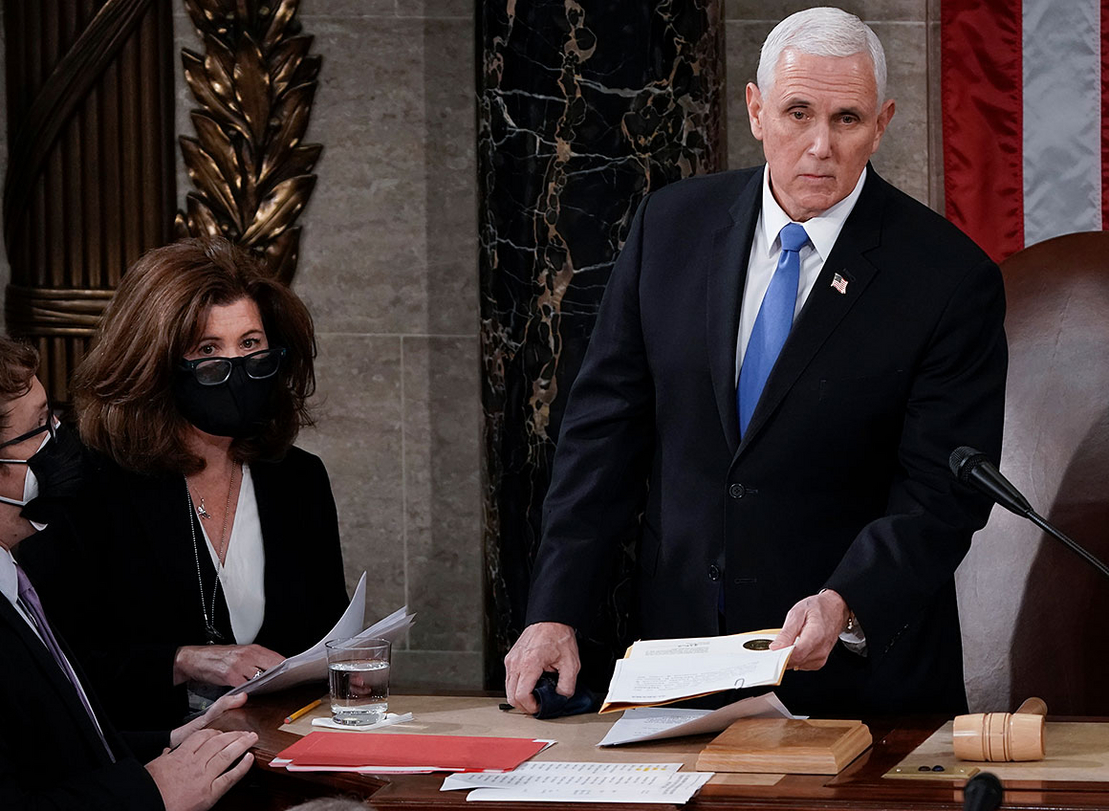 In this Jan. 6 file photo, Senate Parliamentarian Elizabeth MacDonough (second from left) works beside Vice President Mike Pence during the certification of Electoral College ballots in the presidential election, in the House chamber at the Capitol in Washington. Shortly afterward, the Capitol was stormed by rioters determined to disrupt the certification. J. Scott Applewhite, File/AP Photo

The gatekeeper for the most consequential climate bill in U.S. history works behind a nondescript door in the Capitol.

She’s not recognized by tourists or followed by journalists. She can ascend the marble steps near her office without turning heads.

But she has the power to short-circuit the most ambitious climate legislation ever considered by Congress.

Her name is Elizabeth MacDonough.

The Senate parliamentarian is the chamber’s referee, tasked with interpreting its arcane rules and handing down decisions that allow, or prohibit, provisions being included in legislative text. Her influence can sometimes reverberate across the American landscape.

Any day, MacDonough is expected to announce whether the Clean Electricity Performance Program meets the parameters of reconciliation, a process that can be used just once a year to help Congress pass supplemental pieces of the budget. Democrats are pinning their climate aspirations on a $3.5 trillion reconciliation measure because it can be passed with 51 votes instead of 60.

Now those Democratic tactics are elevating the role of a mostly unknown parliamentarian who has at times been critical of using reconciliation as a vehicle for advancing society-shaking policies, like the clean energy program.

“I represent the Senate with its traditions of unfettered debate, protection of minority rights and equal power among the states,” said MacDonough, 55, in a 2018 commencement address to Vermont Law School, her alma mater. “That’s always there, that Senate is my charge.”

MacDonough, the first woman to hold her post, was appointed in 2012 by then-Majority Leader Harry Reid (D-Nev.). Her tenure continued under Sens. Mitch McConnell (R-Ky.) and Chuck Schumer (D-N.Y.), the past and present majority leaders.

The Clean Electricity Performance Program, or CEPP, is the pillar of President Biden’s climate plan for the power sector, for which he aims to cut emissions 80 percent by 2030 and 100 percent five years later. It would offer payments to utilities that meet federal clean energy goals and issue fines to those that don’t. If it passes, most Americans would be using electricity derived from the sun, wind and other carbon-free sources within a decade.

Democrats predicted months ago that Republicans would oppose the program. So they identified a political path that relies only on Democrats: reconciliation.

Though it’s not necessarily intended for passing major policy changes, both parties have used it for just that. Republicans used it in 2017 to pass tax cuts that favored corporations and the wealthy, and Democrats used it in 2010 to pass pieces of health care legislation.

Democrats spent months writing the CEPP specifically to meet the standards of reconciliation protocols. They knew that MacDonough could, one day, be the gatekeeper of their clean energy program.

Sen. Tina Smith (D-Minn.), a key architect of the plan, said the CEPP is “designed to fit within the rules of reconciliation,” but there is also some room for flexibility if MacDonough determines that it doesn’t.

“There could be some give-and-take on that, but it’s not like I’ve got a Plan B in my pocket just in case, because we’ve been designing this all the way along to make sure that it fits those standards,” Smith told E&E News on Thursday.

That means many Democrats are waiting nervously for MacDonough’s decision. And, for some, her past rulings are a cause for concern.

She has already decided against two Democratic priorities this year; both were connected to the reconciliation process. The first was a measure to raise the minimum wage to $15, which MacDonough determined failed to fit the Senate’s complex maze of rules. The other came just weeks ago, when she knocked down a major immigration proposal.

Some progressives, including Rep. Ilhan Omar (D-Minn.), called for MacDonough to be replaced after the minimum wage decision. Others like Rep. Cori Bush (D-Mo.) called for her to be “overruled” after the immigration decision. Those calls could grow louder in the coming weeks if MacDonough decides the clean energy program doesn’t fit the rules of reconciliation.

But that isn’t new.

“I’ve endured calls for my removal, a Facebook troll, hate mail, threats from lovely fellow citizens, suggestions about what I should have actually done with my life, a fake news story about my political allegiances and work history,” MacDonough said in the 2018 commencement speech.

“And still, I have to tell you that I love my job. It challenges me daily, and the people around me, many of them fabulous lawyers like yourself, inspire me daily. As a senator said to me recently, if last year didn’t make you retire, you’re never going to go.”

That was after Senate Republicans tried to repeal the Affordable Care Act, or Obamacare. She stymied their plans, making them find another route.

That came years before an event few could fathom, the Jan. 6 sacking of the Capitol by insurrectionists aligned with former President Trump. MacDonough’s first-floor office was trashed and declared a crime scene. It was locked down for weeks.

MacDonough hasn’t spoken publicly about that event. Her comments in the commencement speech offer a rare glimpse into her personal views.

She was under scrutiny even before ascending to parliamentarian, she said. When MacDonough was a senior assistant parliamentarian, a role she held for 10 years, the late Sen. Robert Byrd (D-W.Va.) would visit her office frequently to pose thorny procedural questions. He usually stumped her.

She said enduring his “Socratic method on steroids,” in which he asked complicated philosophical questions that frequently sent her scrambling for answers in rulebooks, helped prepare her to be parliamentarian.

Byrd was not merely a curious lawmaker. His five decades in office made him the longest serving senator in history, and before his death in 2010, he wrote a four-volume history of the Senate.

Byrd also put a Senate policy in place to ensure all measures that are passed through reconciliation are tied to the budget.

The proposed clean energy program is now undergoing a “Byrd bath” — a closed-door procedure in which the Senate budget committee determines whether a proposed measure will fit a set of legal criteria that would qualify a bill to be passed in reconciliation.

MacDonough remembered one interaction with the West Virginian that convinced her she had found her calling:

“I didn’t like you when you first started; I didn’t think you would amount to much,” Byrd told her.

“But oh my, how you have surprised me,” Byrd said, as recounted by MacDonough.

At Vermont Law School, MacDonough was one of the “most intelligent and capable” students in a yearlong constitutional law class, said Peter Teachout, who taught the course. He said he and another professor watched the Trump impeachment trial just to spot the work of their former student.

“There is no one with greater depth of wisdom or experience dealing with the rules of the Senate, and when you talk with her, you know that she will not let partisanship color her judgments,” Teachout said. “She has ruled for and against both parties. She performs her responsibilities with what I want to call, for want of a better term, ‘passionate disinterest.’”

But what does that mean for the clean energy program?

One former Senate staffer who worked closely with MacDonough said she is thorough and fair. But he said MacDonough has criticized the use of reconciliation to pass policy legislation.

“She’ll call it ‘wreck-onciliation’ or ‘Swiss cheese legislating’ because she can poke holes in all these different things, and then at the end of the day, the advocates have to decide, is this result worth what I’ve been advocating for?” that person said.