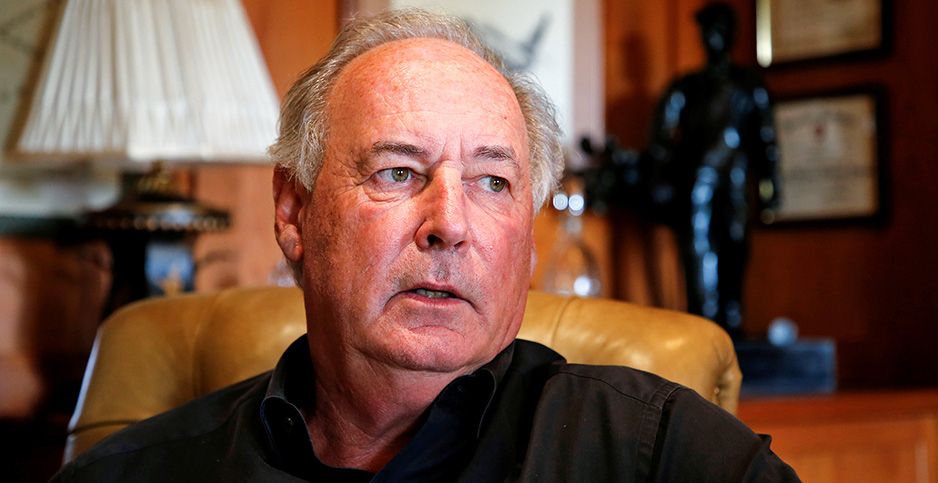 A sex tape, a congressional inquiry into alleged war profiteering and a footnote in the impeachment trial of President Trump.

And that’s just the last few years in the life of Harry Sargeant III, 62, a Florida energy billionaire and a former fighter pilot.

In an impeachment inquiry that turned the nation’s attention to a constellation of controversial characters, Sargeant fits right in. He orbited Trump by associating with Lev Parnas and Igor Fruman, two Soviet-born businessmen who worked with Rudy Giuliani on back-channel foreign policy initiatives in Ukraine. Sargeant’s role was less visible, but his presence was woven through key strands of the president’s effort to have investigations launched into former Vice President Joe Biden.

He knew about U.S. Ambassador Marie Yovanovitch’s dismissal before members of Congress. He used his wealth to pay for plane travel for Parnas and Fruman. He was also trying to develop an energy business in Ukraine, according to Parnas.

In another time, Sargeant’s connection to the concluded impeachment proceedings would perhaps be lost to history. But Parnas made sure that didn’t happen. Stung from rebukes by former friends and associates, including Sargeant and Giuliani, Parnas provided a trove of texts, emails and other documents to impeachment investigators. They reveal how Sargeant was kept in a circle of communication at key moments of the Ukraine controversy.

Parnas is still in possession of unreleased video, photos, texts and documents that he and his lawyer want to release. He has said there is more to the story with Sargeant.

Questions about Sargeant’s role remain unanswered, including why the Florida asphalt and energy billionaire would finance the airfare of Parnas and Fruman.

"Just getting expensive flying u guys everywhere LEV," Sargeant wrote in a text to Parnas in April 2019.

Also, why did Sargeant express enthusiasm about the removal of the American ambassador to Ukraine, and was he riding the coattails of Trump’s shadow foreign policy efforts in Ukraine to pursue his own business interests?

In March 2019, as Giuliani’s efforts intensified to cast Biden’s activities in Ukraine as corrupt, Parnas sent Sargeant a message on WhatsApp about the impending removal of Yovanovitch, the U.S. ambassador, according to records released by Democratic lawmakers.

Sargeant began amassing his fortune when his father, Harry Sargeant Jr., founded Sargeant Marine, one of the world’s largest asphalt storage and transportation firms, in the 1980s. At the time, Sargeant was flying jet fighters in the Marine Corps and later became a Top Gun pilot in the Navy.

By the 1990s, he was helping to expand his father’s firm. He became a power player in Florida politics when one of his old fraternity brothers, Charlie Crist, was elected governor in 2006. Not long after that, Sargeant became the finance chair of the state Republican Party. He later split from the family business and now has several energy businesses, including the International Oil Trading Co. that transported fuel in Iraq. Sargeant lives just down Ocean Boulevard from Trump’s Mar-a-Lago in Palm Springs.

Sargeant associated with Parnas and Fruman when they were seeking international energy deals and bragging about selling American natural gas around the world.

Last year, Parnas and Fruman claimed that their newly formed energy company, Global Energy Producers, would have a partnership with Sargeant, according to a company profile first obtained by Courthouse News Service. The venture was "designed to capitalize on the Trump administration’s pro-energy policies."

It was the kind of adventure a daredevil pilot would embrace. Ukraine has untapped energy resources that many outside investors are wary of touching, for fear of being thrust into complex business deals in a nation plagued by corruption and armed conflict.

It’s unclear whether Global Energy Producers was ever really an energy company. It was part of an alleged criminal conspiracy, prosecutors claim, used by Parnas and Fruman to hide their identities when giving large donations to political campaigns. One of them was America First Action, a pro-Trump super political action committee that received $325,000 from the firm in May 2018.

Sargeant has not been accused of participating in that scheme or of any wrongdoing in the impeachment proceedings.

Sargeant, through his attorney Chris Kise, denied taking part in any plan to remove Yovanovitch, the ambassador, and Kise said Sargeant did not travel to Ukraine to meet with Parnas or Fruman. Sargeant "had and has no business interests in Ukraine," Kise said, adding that the airfare he financed for Parnas and Fruman was meant to be a loan that has not been paid back.

"Mr. Sargeant liked Lev, a colorful and funny acquaintance he first met through GOP friends, and Lev appeared desperate and claimed [he] had no money," Kise said in a statement. "So this was simply a friend loaning small sums of money to another friend down on his luck."

Kise did not specify whether Sargeant tried to pursue business dealings in Ukraine with Parnas, who recently released a recording of himself telling Trump in 2018 that he and Fruman were trying to buy a Ukrainian energy company and to build an oil pipeline from Ukraine to Turkey.

Sargeant has a history of cutting oil deals in some of the world’s most dangerous places.

He was a primary supplier of jet fuel to American forces during the Iraq War when then-Rep. Henry Waxman (D-Calif.) accused him of "war profiteering." A Pentagon audit in 2011 found that Sargeant’s oil company had been overpaid by about $200 million. The federal government reversed course in 2018 and paid Sargeant an additional $40 million. Sargeant called the settlement a "total refutation of baseless and politically motivated allegations of fraud."

Sargeant was sued by the brother-in-law of the king of Jordan after an energy deal related to his fuel transportation contract in Iraq soured. Sargeant lost the suit and was ordered to pay $30 million to Mohammad Al-Saleh. A debt collector, seeking to attain the money, obtained a video featuring Sargeant and a woman having sex.

It was included in a cache of business documents, private emails and "highly personal and private photos and videos of intimate activity and private consensual relations" taken from Sargeant’s email account after he left the family asphalt business because of a rift with his father and brothers, according to a lawsuit Sargeant filed against his brother in 2018.

Getting ensnared briefly in the glare of impeachment hasn’t stopped Sargeant from pursuing an oil deal in one of the world’s most financially risky places, Venezuela. He and Giuliani acknowledged opening back-channel communications with Venezuelan President Nicolás Maduro to encourage him to step down, a move the White House has pushed for months. Sargeant also traveled to Venezuela and brokered a deal with Maduro to rehabilitate some of the country’s destroyed oil fields in exchange for half their revenue, Reuters has reported. That deal was sidelined by the Trump administration’s sanctions on Venezuela.

Two weeks ago, Kise, the lawyer who has represented Sargeant for years, registered as a lobbyist for the Venezuelan government, federal lobbying records show. Kise and his firm were tasked with lobbying the Trump administration to remove the sanctions on Venezuela, a move that could be profitable for Sargeant. Kise did not respond to questions about his work for Venezuela. The lobbying contract was canceled days later after Florida Sen. Rick Scott and other Republicans publicly criticized it.

Sargeant, his wife and his corporate entities have contributed more than $1 million to Republican causes over the last 20 years, including $100,000 to the Trump Victory Fund in June, the Associated Press reported.