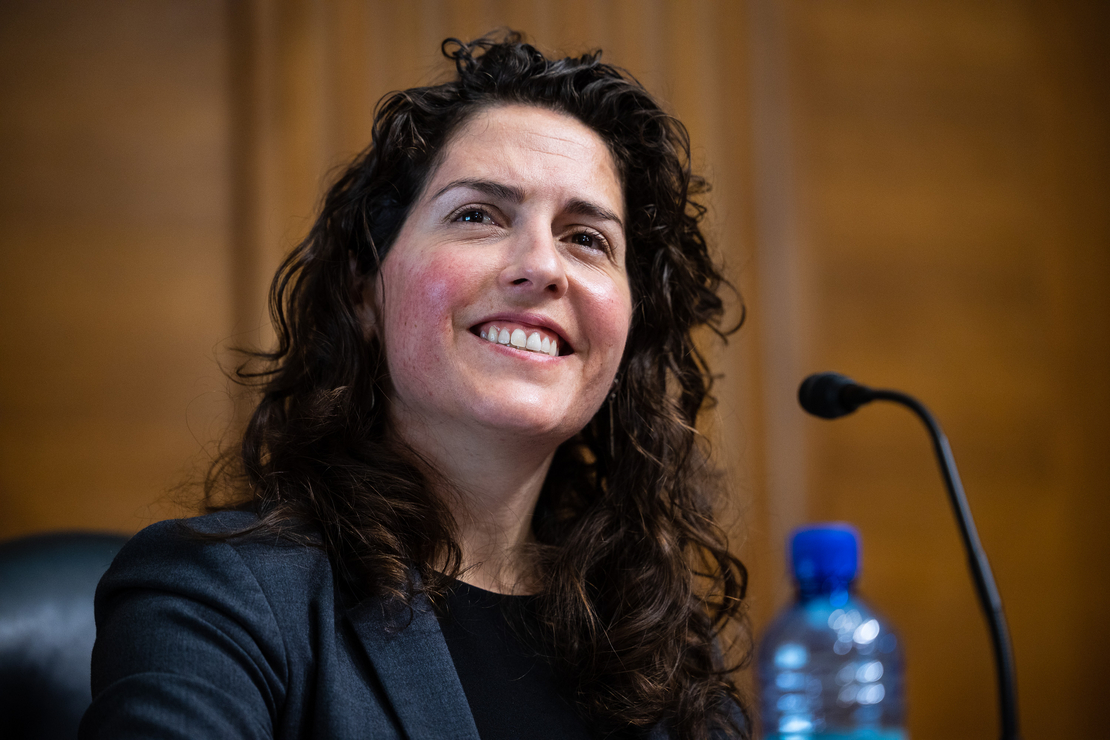 When it comes to the Biden administration’s vision on drilling for offshore oil and gas, all eyes could soon fall to Amanda Lefton.

The director of the Bureau of Ocean Energy Management — a former labor organizer and onetime policy wonk in New York’s governor’s office — clearly relishes a different part of her job: orchestrating the Biden administration’s push to approve wind farms in federal waters off America’s coasts. But her bureau is also in charge of writing a plan that will guide offshore oil and gas development for the next five years, with ripple effects on the nation’s offshore energy production that extend much further into the future.

Interior Secretary Deb Haaland announced in a hearing on Capitol Hill last week that a draft five-year plan will be released by the end of next month, illuminating the climate-focused department’s strategy for managing the country’s massive stores of offshore crude oil and natural gas.

The Interior Department’s recent cancellation of the final three offshore lease sales on the current schedule —which enraged Republicans and the industry — has magnified focus on what the next plan will mean for future oil and gas auctions and whether it will take the bold step of halting or shrinking where the oil sector can capture new rights to drill (Greenwire, May 12).

That all puts Lefton, who spent several years working on environmental policy issues at the Nature Conservancy, at the center of one of the most contentious policy fights between the Biden administration and GOP lawmakers. Louisiana Rep. Garret Graves (R), who’s previously pressed the administration to put out a new five-year plan, called the cancellation of lease sales an act of “irresponsibility and reckless stupidity.”

Observers have speculated that the offshore leasing fight has even driven powerful conservative Democratic Sen. Joe Manchin (W.Va.), chairman of the Senate Energy and Natural Resources Committee, to hold up a confirmation vote on a key Interior energy political nominee in frustration.

Haaland last week pledged to lawmakers that her agency will deliver the five-year plan by June 30 but didn’t reveal any details about what it would look like — much to the frustration of lawmakers like Manchin, who wanted her to commit to future lease sales (Greenwire, May 19).

Historically, the plan offered two auctions a year in the Gulf of Mexico and several off the shores of Alaska. Until BOEM fully approves a new plan — which could take months — it can’t hold new auctions this year, lengthening what’s become an effective moratorium on offshore lease sales since Biden took office, and blurring the long-term outlook for drilling offshore, which sources 15 percent of the nation’s oil supply.

In a wide-ranging interview with E&E News, Lefton said BOEM is “actively working” to complete a new plan. She blamed the lag in releasing a new draft on the Trump administration, which proposed a five-year program in 2019 that would have dramatically expanded drilling opportunities, only to table it the following year under a shift in Interior leadership and significant pushback from coastal states. Despite high interest from both the industry and activists in a new plan, no new document was made public before the Trump administration left office.

“We are trying to make up for lost time,” Lefton said. She also touched on the president’s clean energy ambitions, BOEM’s role in reforming offshore oil development and how she might expand the small agency to meet the scale of leasing the nation’s first fleet of offshore wind farms.

Candid details on the plan, however, stopped there. Whatever oil and gas leasing schedule emerges from Lefton’s staff, it’s likely to center on the climate impacts of burning the nation’s massive store of fossil fuels, something Lefton noted as critical in reforming offshore energy.

“We know that climate change is the greatest crisis of our time, and we have to transition to clean renewable energy in order to fight climate change,” Lefton said.

That stance has sent shivers through the oil and gas industry.

“We need policies in place that support domestic energy production,” she said.

Lefton is one in a cohort of Biden administration political appointees at Interior, many with backgrounds in state government or environmental nonprofit groups, carrying out the White House’s strategy to build a lasting climate reckoning department by department. With BOEM, it appears the game plan is to rapidly expand an offshore wind sector that had been slowed down by politics and permitting challenges while limiting the reach of the oil industry with fewer — and smaller — lease sales.

Lefton’s career has long touched on public policy, from a stint as a legislative aide to New York Assemblymember Kevin Cahill (D) to several years in labor organizing and then a long period at the Nature Conservancy as a policy adviser and deputy director. In 2019, Lefton left the group to join former New York Gov. Andrew Cuomo (D) as first assistant secretary for energy. There, she dug into some of the issues that are now central to her work at BOEM — working to overhaul the state’s onshore renewable permitting process and helping develop New York’s progressive offshore wind approach, which is one of the most ambitious in the country.

“I think it’s fair to say she went to BOEM with a good sense of urgency about renewables, siting and recognizing that permitting can be a barrier,” said Anne Reynolds, director of the Alliance for Clean Energy New York, who worked with Lefton during her New York policy days.

A focus on wind

Lefton appears to have tackled the Biden administration’s offshore wind ambitions with full force. BOEM has approved the first ever offshore wind farms of scale in the country: the Vineyard Wind and South Fork wind projects off the coasts of Martha’s Vineyard, Mass., and Rhode Island. It also advanced nearly a dozen offshore wind projects on the path toward project approval.

Lefton said she is determined during her time at BOEM to ensure the bureau meets ambitious clean energy targets set by the administration, which includes approving 16 offshore wind farms by 2025 to reach 30 gigawatts of offshore wind by 2030.

Though ambitious, those goals are likely within reach if BOEM officials “keep their foot on the gas,” said Aaron Barr, head of onshore wind for Wood Mackenzie.

“It’s clear that the Biden administration has done everything they can to accelerate the industry,” he said. “The Bureau of Ocean Energy Management, and the Department of Interior, really do hold a lot of influence on the timeline for these projects.”

Lefton said it’s hard to see the behind-the-scenes work at BOEM, but the agency learned lessons on how to be more efficient from both Vineyard and South Fork. BOEM is now working to standardize the review of construction and operations plans, cutting out repetitive analysis, she said. This process also includes making sure fishermen “have a seat at the table” and siting responsibly, Lefton emphasized.

“It’s not easy to site renewable energy,” she said, noting her experience in that arena in New York. “We have to be really thoughtful about identifying areas that are least impact and ensure that we are weighing multiple uses.”

Lefton has expanded BOEM’s modest renewables office from 30 to 45 people and said she hopes Congress passes a budget to boost BOEM’s funding “to ensure that we are adequately resourced and staffed for the workload ahead.”

Fred Zalcman, director of the New York Offshore Wind Alliance, said growing BOEM to handle the influx of offshore wind projects may be one of its key challenges in meeting Biden’s goals.

BOEM is living through a “transition period,” he said, adding that despite years of working toward raising turbines in the ocean, the agency’s actions have largely been “theoretical.”

“We’re seeing now the pace really starting to take off,” he said. “As an agency, to scale up, to meet that new demand is going to be a challenge.”

Still, Gregory Gould, a former director of the Office of Natural Resources Revenue, an agency that was previously combined with BOEM and the Bureau of Safety and Environmental Enforcement as the Marine Minerals Service, said one thing Lefton has in her employ is a seasoned career staff that is experienced in conducting massive lease sales — it’s just that it had been focused on fossil fuels, not renewables.

“I think they are probably pretty well placed to do what they need to do,” Gould said. “When you look at the scale of oil and gas leasing, all the way back into the ’80s, there were times when we were trying to lease the entire outer continental shelf.”

Gould also thought it likely BOEM under Lefton would continue to lease oil and gas as it replaces the five-year plan, despite the climate ambitions of the White House.

“They’ll still have to go through that process, even if it’s a small scale,” he said of the obligation under the law to manage offshore oil and gas resources.

While Lefton has been opaque when it comes to that work, she has noted her strong interest in reforming the oil program during her tenure.

That agenda includes incorporating climate costs into the analysis of oil and gas leasing, using the social cost of carbon metric, and updating foreign consumption of oil and gas impacts to their emissions forecasts, Lefton said.

It also means ensuring adequate bonding on oil and gas leases to cover the cost of plugging and decommissioning, a popular focus for environmentalists and Democrats since the release of a Government Accountability Office report in 2021 that found thousands of miles of offshore pipeline has been allowed to be abandoned on the seafloor. GAO has also reported that by BOEM’s own accounting, the cost of cleanup for existing offshore oil infrastructure far exceeds the current bonding for cleanup costs.

That, too, is a matter Lefton said she intends to begin to fix.