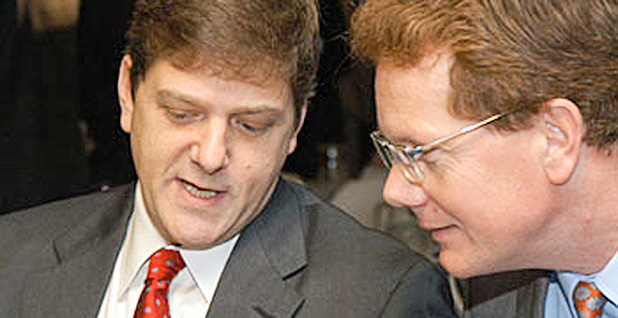 As President Trump faces other leaders at the Group of 20 summit in Germany this week, his new "Sherpa" will do the heavy dealmaking behind the scenes on everything from trade to climate and energy.

The goal for Everett Eissenstat, a trade expert with deep Republican connections on Capitol Hill: Please the president without alienating the rest of the world.

Eissenstat, Trump’s negotiator at the summit, has spent the past several days negotiating the text for a communiqué Trump and other world leaders are expected to sign in Hamburg tomorrow.

And there’s still a long way to go.

Late-night discussions the last two nights on issues ranging from trade to climate change have broken down without Eissenstat and his foreign counterparts agreeing on language.

And today, Trump skipped key negotiations on the climate and energy part of the text for an already-scheduled bilateral meeting with Russian President Vladimir Putin. That means Eissenstat is due for a late night again tonight, hammering out that and other points of disagreement.

Eissenstat’s starring role in behind-the-scenes dealmaking emerged last month after the White House ousted his predecessor as Sherpa, Kenneth Juster, who was pushed aside before the Group of Seven summit in Sicily. Juster reportedly clashed with the more nationalist wing of Trump’s White House led by chief strategist Steve Bannon but is expected to be nominated for an ambassadorship.

National Economic Council Director Gary Cohn, who is Eissenstat’s boss, led negotiations in Sicily, which occurred before Trump announced on June 1 that the United States would not remain part of the Paris climate deal.

Now, with the United States withdrawing from the Paris accord, the German presidency of the G-20 is working toward a communiqué that acknowledges that decision while showing that the rest of the world is resolved to stay the course on Paris implementation.

It has been a difficult job for Eissenstat, and it isn’t over yet.

Trump’s team, which includes Eissenstat, originally proposed language in a draft dated July 3 that would have said the United States was committed to a "global approach" to address climate change, but the Germans and others rejected that language because they thought it left the door open for a Paris renegotiation, which they say is a non-starter.

Sherpas are now discussing language proposed by the United States that says "given the importance of energy access and security in the nationally determined contributions of other countries, the United States of America will endeavor to work closely with other partners to improve their access to and use of fossil fuels more cleanly and efficiently, and help deploy renewable and other clean energy sources."

U.S. experts say there are a variety of problems with this proposed language, which will continue to be negotiated into the wee hours of the morning by Eissenstat and his counterparts.

Andrew Light, a distinguished fellow at the World Resources Institute, said the negotiators from other countries were wrong to swap the reference to a "global approach" for a reaffirmation of the need for fossil fuels going forward.

Alden Meyer, the strategic and policy director of the Union of Concerned Scientists, said the new language seems to hint that energy access and security is more important to the other 19 members of the G-20 than climate action is — not at all the message German Chancellor Angela Merkel hoped to send at this week’s summit.

"This is causing a lot of heartburn and pushback from a number of countries, and I’m sure this will be one of the topics of negotiation," he said, though he noted that Trump’s tête-àà-tête with Putin might make it difficult for the leaders to iron out differences today.

The Germans hope the communiqué and a separate climate and energy action plan will reflect that, while Trump has pulled the United States out of the Paris deal, other countries are continuing to take action to combat climate change. That means holding together a coalition of other countries that include Saudi Arabia, Russia and others that have sometimes parted ways with Europe on climate and energy. So far in the negotiations, it appears that the "G-19" is holding firm.

Before joining the administration, Eissenstat had a lengthy career on and off Capitol Hill in trade policy. In 2011, he began serving as the Senate Finance Committee’s chief international trade counsel under Republican Sen. Orrin Hatch of Utah, earning the reputation as a "pro-trade kind of guy," according to sources.

He also served as assistant U.S. trade representative for the Western Hemisphere and worked as a legislative director for former Rep. Jim Kolbe (R-Ariz.).

While it’s unclear what Eissenstat would bring to energy and climate discussions, Hatch has pushed back against efforts to tax carbon and backed Trump’s decision to withdraw from the Paris pact.