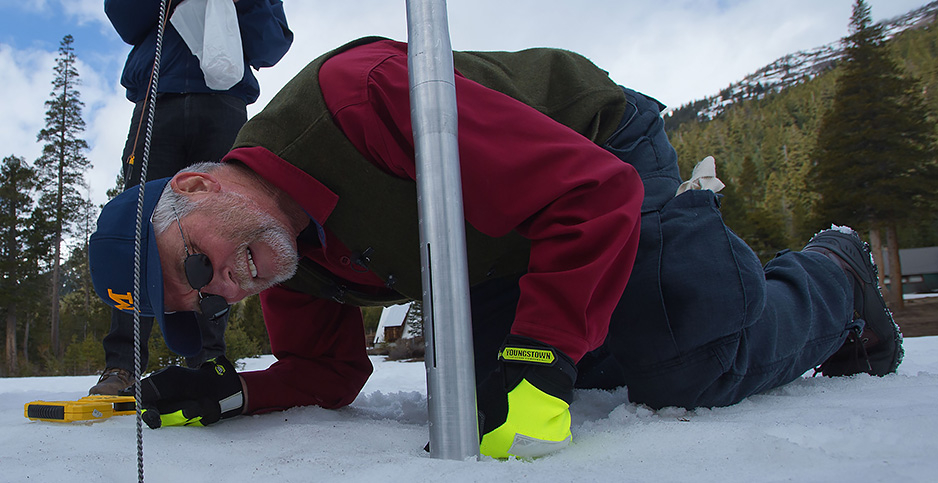 Frank Gehrke takes snow samples at Phillips Station in El Dorado County, Calif., on March 28, 2013. The last Sierra snow survey of the season is the most important to determine water supplies for the rest of the year. Randall Benton/ZUMA Press/Newscom

California is heading for a "critically dry year" as drought spreads across the American West, creating a slow-moving crisis for the Biden administration and state officials.

The Golden State’s annual survey of Sierra Nevada snowpack, upon which it relies for as much as a third of its water, was only 59% of normal, officials warned last week, underscoring that the state didn’t get the "March miracle" of rain and snow it had hoped for.

Climate change is affecting water patterns across the West, water managers said, including a prolonged "mega" drought and more precipitation falling as rain instead of snow. And much of that snow melts more quickly.

"This is a big issue," said Jeff Kightlinger, the general manager of the Metropolitan Water District of Southern California, the country’s largest wholesale water provider. "This is really climate change starting to hammer home, and we’re starting to see it."

California’s Department of Water Resources (DWR) said the state is "better prepared" than the last time it faced a severe drought, from 2012 to 2016, because of new management strategies. But its reservoirs are only about half full now.

"State agencies, water suppliers and Californians are more prepared than ever to adapt to dry conditions and meet the challenges that may be ahead," DWR Director Karla Nemeth said.

The forecasts have already affected water deliveries and are raising the specters of mandatory curtailments and fallowed cropland. And the dry conditions set the stage for a potentially dangerous wildfire season this year.

The agencies that manage the two complex systems of dams, canals and aqueducts that shuttle California’s water from its wet North to cities and farms in its drier South have both taken unusual steps to reduce the amount of water they expect to deliver this year.

DWR, which oversees the State Water Project, plans to deliver only 5% of requested water to contractors, down from the 10% it anticipated in December. And the federal Bureau of Reclamation, which helms the Central Valley Project, also said it plans to deliver only 5% of supply to agricultural contractors south of the Sacramento-San Joaquin River Delta and east of San Francisco, the state’s water hub.

"We are now facing the reality that it will be a second dry year for California, and that is having a significant impact on our water supply," Nemeth said last month.

It’s not just California. Climate scientists said the challenges are affecting virtually every major water system in the West.

Almost half of the country — from the Pacific Ocean to the upper Midwest — is suffering from moderate to exceptional drought, NOAA said recently in its spring outlook.

And due to this year’s continued La Niña pattern, the drought is expected to deepen, especially in the Southwest. La Niña is the devilish sister of El Niño and the result of unusually cool water in the eastern tropical Pacific Ocean. It causes a high pressure system that shoves the jet stream — and its accompanying storms — north, resulting in drier conditions among the western and southern U.S.

"The Southwest U.S., which is already experiencing widespread severe to exceptional drought," Mary Erickson, deputy director of the National Weather Service, said in a statement, "will remain the hardest hit region in the U.S., and water supply will continue to be a concern this spring in these drought-affected areas."

Benjamin Cook, an adjunct research scientist at the Earth Institute’s Lamont-Doherty Earth Observatory, said much of the West is in "some of the most severe drought we’ve seen in the last 20 years."

The effects are starting to be felt on the ground in many ways, said Nancy Selover, Arizona state climatologist. She noted that 91% of the rangeland in her state is in poor or very poor condition.

"I don’t know if this is a wake-up call — we knew this was coming," she said. "There is no expectation that’s going to change."

The dire water forecast comes at a challenging moment for both federal and state officials.

Across the Colorado River basin, seven states are set to begin negotiating new operations and management guidelines soon that must be implemented by 2026.

The Colorado River supplies water to more than 40 million people and millions of acres of farmland. Its states and the federal Bureau of Reclamation agreed to a drought contingency plan in 2019, but that was a temporary Band-Aid before more contentious talks begin. And the situation has only gotten worse since then. Now more than 80% of the river’s Upper Basin, where most of the water originates, is in exceptional drought. And officials expect Reclamation to formally declare a shortage this year, triggering further cutbacks.

Kightlinger said that up to now, the basin states — Arizona, California, Colorado, New Mexico, Nevada, Utah and Wyoming — have largely negotiated over good things, like storing more water in Lake Powell or Lake Mead to prop up their levels and prepare for prolonged drought.

Colorado River states have historically prided themselves on cooperative negotiations and congeniality — as well as not needing heavy involvement from the federal government.

That also may change as the current negotiations drag on, and require the Biden administration and lawmakers to step in.

"Let’s negotiate the longer-term approach, hopefully with the help of the Biden administration and Congress," Kightlinger said. "We are going to need some federal force and some federal finesse to get over the spots where we are stuck."

Michael Connor, commissioner of the Bureau of Reclamation in the Obama administration, agreed that the negotiations are "going to get more tricky with climate change and ongoing demands."

"There’s always a concern that drought does not get the crisis response of other natural disasters," Connor said, "but the administration’s focus on water infrastructure supports the need for sustained investments to address water challenges, from basic supply issues in underserved communities to healthy watersheds."