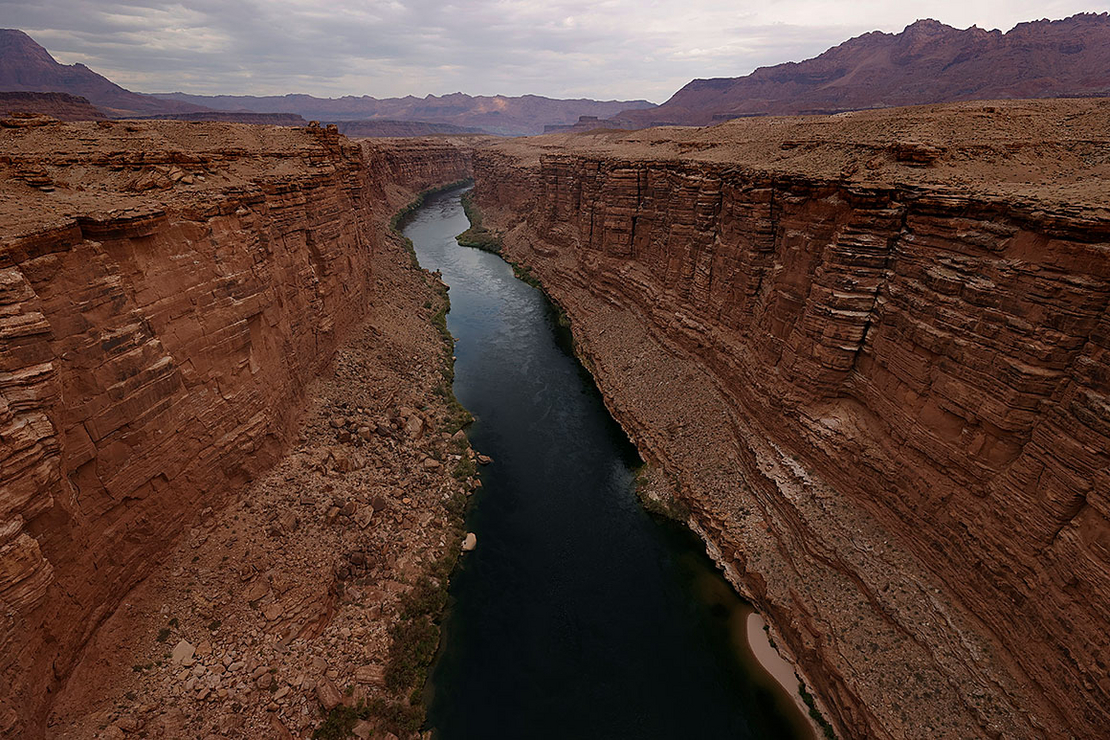 The Colorado River flowing by the historic Navajo Bridge in Marble Canyon, Ariz. As severe drought grips parts of the western United States, a below-average flow of water is expected to move through the Colorado River Basin into two of its biggest reservoirs, Lake Powell and Lake Mead. Justin Sullivan/Getty Images

The Biden administration today will declare a water shortage on the Colorado River for the first time ever, triggering cutbacks in the Southwest due to a decadeslong drought that experts say is a sign of what’s to come.

Bureau of Reclamation officials will announce that water levels in the river’s main reservoirs have dropped so low they have triggered mandatory delivery reductions in Arizona and Nevada.

The announcement comes as heat waves and wildfires are scorching the West, presenting the Biden administration with another crisis. A 20-year "megadrought" in the seven-state Colorado River Basin has caused Lake Mead and Lake Powell to drop to levels not seen since they were originally filled a half-century ago.

"This drought has come on faster and harder than last time," said Ellen Hanak, the director of the water policy center at the Public Policy Institute of California, referring to the last Golden State drought that ended in 2016. "We are in year two, but we’re in as bad a shape as year three of what was a record drought last time."

Today’s announcement means Arizona and Nevada will face the first round of cuts next year under operating guidelines agreed to by the basin states — Wyoming, Colorado, Utah, New Mexico, Arizona, Nevada and California. Arizona’s share of the river’s water will be cut by nearly a fifth, or 18%, mainly affecting the state’s farmers. Nevada will lose approximately 7% of its allocation.

Forecasters have seen water restrictions coming as due to drought conditions and reduced flows from low precipitation and reduced snowpack. And many basin states have taken proactive steps to conserve the water supply for 40 million people and millions of acres of farmland.

But today’s announcement nevertheless signals a critical moment in the basin. New operating guidelines on the river must be finalized by 2026, and negotiations are now getting underway.

The basin states and Mexico have historically touted their willingness to collaborate on river management. Going into the this round of negotiations, however, it is clear that they will be forced to tackle the contentious question how to make do with less water.

Some forecasters are beginning to question whether current conditions represent an episodic drought — which has an end — or if it’s a sign of a new climate change reality.

"This drought — or this dry period, depending on how you want to look at it — it’s been going on for 20 years," said Paul Miller, a senior hydrologist with NOAA’s Colorado Basin River Forecast Center. "At what point is not a drought or a dry period? Is it just the new normal?"

A new word is creeping into that discussion: aridification. Proponents of that theory argue that the issue is not that droughts are becoming more severe or more frequent. It’s that the American West is drying up.

"This is all symptomatic of climate change," Miller said. "It’s what the science says will be realized, and it is being realized."

The announcement could further drive a wedge between the river’s upper and lower basin states.

Upper basin states like Colorado, Wyoming and Utah typically don’t use their full allocation of Colorado River water under the river’s 1922 compact. They are considering new projects to take more out of the river before it flows to lower basin states.

"There is sort of a rush now in the upper basin," said Eric Kuhn, the former general manager of the Colorado River District and author.

Conservationists see trying to develop the river’s dwindling flows as folly. In the past two decades, the Colorado River’s flows have dropped by a fifth, or about 20%.

"We have overdrawn the bank account," said Zach Frankel of the Utah Rivers Council, "and we are about to bounce our checkbook."

Some states, particularly in the lower basin, are working on ways to produce new water supplies separate from the river.

With the financial backing of Nevada, the Metropolitan Water District of Southern California, the country’s largest water provider, is exploring a $4 billion wastewater recycling facility. That effort has been supported by several members of Congress who have introduced legislation, H.R. 4099, that would create $750 million in new federal funding for large-scale water recycling.

And some are calling for increased involvement in what they are calling a slow-moving, climate-related disaster across the West.

"Now is the time for strong congressional leadership and significant federal investment, which is needed to reduce risk and improve resiliency to drought and changing climate conditions," John Entsminger of the Southern Nevada Water Authority, which feeds Las Vegas, said at a recent congressional hearing (E&E Daily, June 30).

But managing limited water resources will undoubtedly be contentious at both at the state and federal levels. Farmers will push for irrigation deliveries, while conservationists say environmental priorities — such as mandating river flows to protect endangered salmon — are once again neglected.

That tension is playing out in California. Environmental groups like the Natural Resources Defense Council have sharply criticized Reclamation’s management of Shasta Dam. During the last drought, they note, similar management led to a die-off of nearly an entire run of salmon, and current conditions suggest that may happen again.

And with new groundwater sustainability regulations coming online in California, farmers can’t pump their way through the drought.

"Farmers are going to get squeezed the hardest in this drought, and it’s because they are the furthest beyond the bounds of sustainable use," Cora Kammeyer of the Pacific Institute said. "That is a reality that we just can’t ignore or push it off anymore."