Mehmet Oz goes all in on fracking to woo Pa. voters 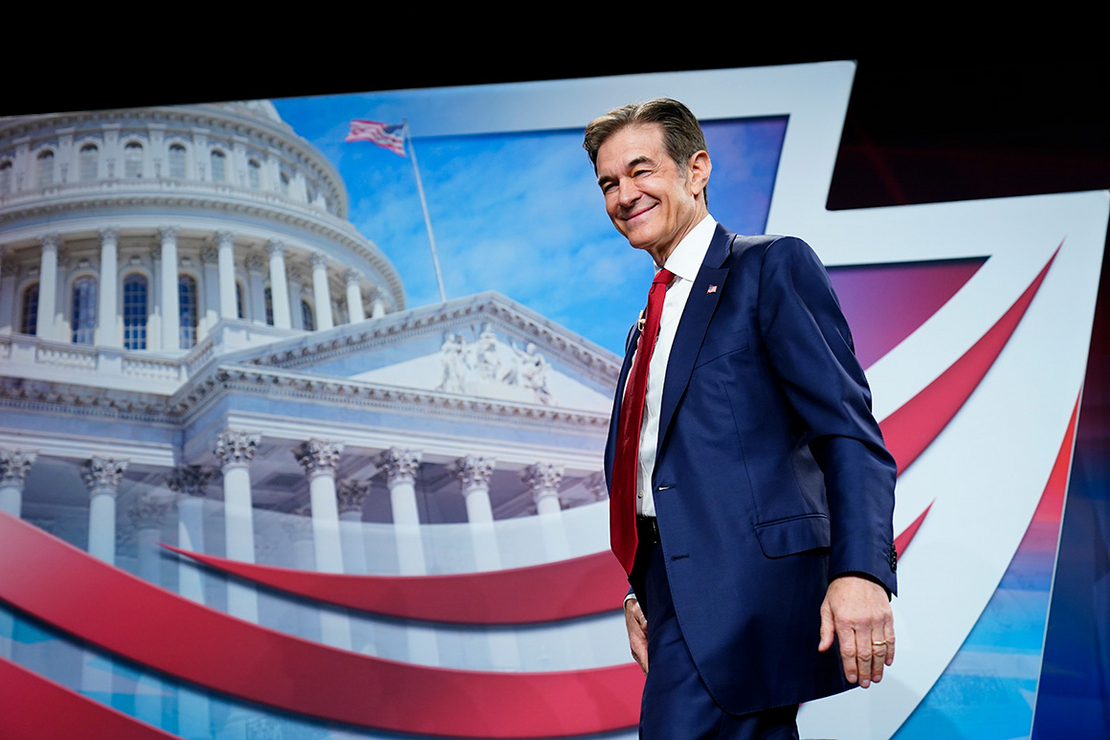 Mehmet Oz is making natural gas a central pillar of his Pennsylvania campaign for Senate as he seeks to show that he cares about issues important to the state.

He’s getting help in the effort from big names like Continental Resources Inc. Chair Harold Hamm and former Energy Secretary Rick Perry, who are backing him and joining him on the campaign trail.

“If we were to use our natural gas right here, from under our feet, and use it to replace dirty coal from overseas manufacturers, it would be the equivalent of electrifying every U.S. car, plus putting a solar panel on every roof, plus doubling wind energy production — all together,” Oz argued at a candidate forum last month.

The claim is similar to a proposal Pittsburgh-based gas producer EQT Corp. has been pushing recently; it’s unclear if the analysis accounts for factors such as methane leaks during gas production, transportation and use. EQT President Toby Rice also spoke at Oz’s energy-focused campaign event.

Oz’s new love for fracking is a change from the past. He once published columns critical of the practice and highlighted health issues that researchers had linked to fracking.

It comes as he looks to close a polling gap with David McCormick, a former hedge fund CEO and the current favorite to win the primary next month. Both candidates are battling charges that they are carpetbaggers, and gas could be a way for Oz to endear himself with Pennsylvania voters.

‘Green New Deal is a lie’

At the candidate forum, Oz, who considers himself a scientist, said the Green New Deal — an idea from progressive Democrats that has never become law — is to blame for gas’s woes.

“As a scientist, I’ll tell you, the Green New Deal is a lie. It’s not just unfair because we’re sacrificing our energy independence. Actually, we want more than energy independence, we want energy dominance. That’s what we deserve, what we have,” he said. “We’re giving it away for a false narrative, the Green New Deal. Because we cannot power this American economy with windmills, and we won’t be able to do it for a while.”

He also denied established climate change science, saying the carbon dioxide emissions that are causing global warming and related issues are not a problem.

The gas industry is being hurt, Oz said, “for no good reason except the ideology that carbon is bad — which itself is a lie. Carbon dioxide, my friends, 0.04 percent of our air. That’s not the problem.”

While Oz is correct about the proportion of carbon dioxide in the air, the scientific consensus is that the heat-trapping gas is nonetheless a driver of warming.

He said at the campaign event that “most of the country” believes in the Green New Deal, but said that belief was based on a “false narrative.” He suggested environmental regulations he opposes are similar to the way liberals have dealt with the Covid-19 pandemic, which he described as “totalitarian rule.”

“They told the story, told us they have to mandate, and it didn’t help us,” he said. “Not that we didn’t have a problem, it’s that it didn’t help our problem get better.”

Oz has complained on social media about energy policies. Last month he posted a video on gas prices that asked Biden to “give us the freedom to Frack!”

Perry said Oz understands what the country needs to do to make Pennsylvania’s gas industry flourish.

“I want to see him in the well of the United States Senate debating things that are important for this country, how to make America energy independent again. That’s what this individual has the potential to do,” Perry told voters, saying Oz is “the prescription that this country needs.”

Hamm, who in the past has partnered with Oz on public health initiatives in Oklahoma and elsewhere, said the Senate needs Oz to help stop Biden’s energy agenda, including the halt on new oil and gas leases on federal land, which a federal court last year overturned.

“We have to send people up there that can turn it around and make it happen again. And I know this guy can do it,” Hamm said.

As Oz works to move past his image as a television doctor, the energy focus could yield dividends, said Christopher Borick, director of Muhlenberg College’s Institute of Public Opinion.

“He wants to expand his brand a bit, which is often focused on health issues and his broader celebrity, and find some issues that could be productive. Energy is a natural fit in Pennsylvania,” Borick said, pointing to the overlapping issues of economics, security and the current energy price spikes.

It might also help Oz shake off his image as a relatively new Keystone State resident aligned with the entertainment industry. He used to live mainly in New Jersey and recorded his television show in New York.

“How do you show your Pennsylvania understanding and connections? Fracking could be an opportunity,” Borick said. “You’d want to get in front of that, the importance of that, talk about Pennsylvania being a leader to help the country get to energy independence.”

Courting Perry’s endorsement could also bring Oz closer to former President Donald Trump in voters’ minds. Trump has not backed anyone in the race since his pick, Sean Parnell, dropped out last year following a child custody battle with his estranged wife that featured abuse allegations. Parnell, an Army veteran, was the campaign’s most outspoken fracking advocate.

The move to embrace fracking hasn’t been seamless for Oz, who’s battling allegations that he’s flip-flopped on the issue. McCormick pointed to those allegations at the candidate forum, including that he advocated for a statewide moratorium on fracking and claimed that the practice is harmful to nearby residents.

“That is wrong! That’s a lie and you know it’s a lie,” he said, calling McCormick “dishonest” as the event’s moderator pushed both candidates to stop the attacks.

Numerous syndicated columns Oz published with Dr. Mike Roizen of the Cleveland Clinic Wellness Institute, first reported last month in HuffPost, take the opposite view on fracking from the doctor’s current arguments. The pieces were written when fracking was a hot-button issue, with the type of health-related questions Oz liked to highlight in his entertainment career.

“In Pennsylvania, there are multiple reports of air and water contamination, possibly from hydraulic fracturing sites, causing folks breathing problems, rashes, headaches, nosebleeds, numbness, nausea and vomiting,” he wrote in a 2014 piece, advocating for a moratorium on fracking as New York state has.

He and Roizen argued for new regulations on fracking, like in a 2015 Newsmax piece advocating for disclosure rules about the substances used.

Federal and state officials have through the years documented cases of respiratory, skin, digestive and other problems associated with proximity to fracking and other gas production operations. The gas industry points out that the risks from production are very low.

Oz’s campaign defended his record. It pointed to a letter Roizen signed shortly before Oz launched his Senate campaign, in which Roizen said he had taken over management of the column since 2009. Roizen said he should have pointed out when Oz disagreed with his writings, but now realizes he did not always do that.

“As a scientist, Dr. Oz understands that, like with COVID, the Biden administration is ignoring the science and the benefits of natural gas in order to satisfy the radical Left, the same liberal Democrats that are supporting radical environmental measures and funding David McCormick’s campaign,” Yanick added.

Oz and his opponents are vying to succeed Sen. Pat Toomey (R), who is retiring after two Senate terms. The Republican primary winner will likely face either Lt. Gov. John Fetterman or Rep. Conor Lamb, the main Democratic primary contenders, both of whom support fracking (E&E Daily, Sept. 28, 2021).