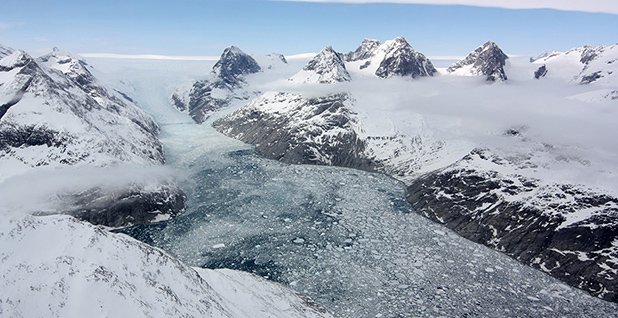 The world’s melting ice sheets may have consequences far beyond global sea-level rise, scientists say. They may also change the ocean’s circulation, alter global temperature patterns and even drive extreme weather events around the world.

Under a business-as-usual climate scenario, with warming likely exceeding 4 degrees Celsius by the end of the century, a major ocean current could slow down. Some parts of the world may cool off, while others could warm up even faster. Heat waves and other severe weather events might happen more frequently. And changes in the Southern Ocean may drive more warm water to the edge of Antarctica — causing the ice sheet to melt at even faster rates.

These findings, published yesterday
in the journal Nature, join a growing body of research suggesting that melting ice may have a more complicated influence on the global climate system than previously thought.

"It’s really just underpinning the fact that we are probably messing with something that we don’t fully understand," said lead study author Nicholas Golledge, an Antarctic ice sheet expert at Victoria University of Wellington in New Zealand.

Climate models don’t typically account for fresh water pouring into the ocean from melting Greenland and Antarctica. As a result, those consequences are missing from many simulations of the warming planet.

The reason is in part because it’s difficult to accurately simulate ice sheet melting in global climate models, which take a broad look at the world as a whole. The Greenland and Antarctic ice sheets are complex enough that they generally require their own separate, high-resolution models.

And until about 10 years ago, many scientists assumed that the melting ice sheets had little effect on the climate system as a whole, beyond their contributions to sea-level rise, Golledge noted.

In recent years, though, researchers have begun to suggest that the icy fresh water might be disrupting some major climate processes as it flows into the ocean, with the potential for dramatic effects worldwide.

To address the modeling problem, the authors of the new study conducted a series of simulations. First, they used updated satellite observations of Greenland and Antarctica to simulate the melting ice sheets under future climate change. Then, they added those estimates of future ice melt to a global climate model simulation and compared its response with simulations with no meltwater influx included.

Meltwater from Greenland, they found, may substantially affect the flow of a huge ocean current known as the Atlantic meridional overturning circulation, or AMOC. Akin to a gigantic conveyor belt, the AMOC helps ferry warm water from the tropics to the Arctic. Its important role in distributing heat around the world also gives it a major influence on global weather patterns — the AMOC’s warm-water flow is largely credited with the mild climate in places like Western Europe.

As fresh water pours into the ocean from the melting Greenland ice sheet, it may cause this current to slow down. Some scientists have suggested that this process may have already begun.

As the transport of heat becomes more sluggish, climate patterns throughout the North Atlantic may begin to change. The new study suggests that some regions, including the Greenland continent, may actually experience a cooling effect. Other places, like the eastern Greenland sea on up to the North Pole, may warm up.

Meanwhile, melting ice from Antarctica may upset the structure of the Southern Ocean, the research suggests.

Because fresh water is less dense than salt water, large influxes of meltwater could fail to mix in with the rest of the ocean and instead form a layer that rests on the surface of the water. This cold sheet of liquid traps heat beneath it and causes deeper layers to warm up.

Deepwater currents in the Southern Ocean carry this warm water to the edge of the Antarctic continent, where it bubbles up and laps against the edge of the ice. The warmer the water, the more melting it’s likely to cause.

Recent research suggests that warm ocean currents are already increasing melt rates at glaciers in some parts of the ice sheet, particularly West Antarctica. If even more warm water is able to reach the ice in the future, the melting could speed up.

The simulations also suggest that the climate system overall may become more variable, or prone to fluctuations and disturbances like extreme weather events. Under a business-as-usual climate scenario, year-to-year variability may increase by as much as 50 percent.

The research indicates that "polar ice sheets will have a crucial role in Earth’s climate in the future," beyond what the models currently reflect, writes Helene Seroussi, an ice sheet expert with NASA’s Jet Propulsion Laboratory, in a comment on the new research.

These findings don’t come as a complete shock. Other recent research suggested that the melting ice sheets may have some far-reaching climate consequences.

Multiple studies have now indicated that continued Greenland melting may slow the flow of the AMOC, disrupting climate and weather patterns throughout the North Atlantic.

And one 2018 paper in Nature suggested that Antarctic melting under a business-as-usual warming scenario may slightly slow the rate of global warming. It could delay the approach of the 1.5 and 2 C temperature targets outlined under the Paris climate agreement by a decade, the research suggests.

That study assumed a fairly extreme amount of ice melt by the end of the century, enough to raise global sea levels by about 3 feet. Some research has suggested that Antarctic glaciers may destabilize in a specific way under high levels of future warming — as ice shelves at the ocean’s edge melt and break apart, entire ice cliffs could collapse and unleash a massive outpouring of ice into the ocean. Three feet of sea-level rise might be expected by 2100 if this process were to actually occur.

Yet new research, also published yesterday in Nature, has challenged this idea, suggesting that this kind of ice cliff instability may not be so likely after all. That means future sea-level rise may be less extreme.

All of these findings underscore the fact that many components of the climate system — particularly those related to melting ice sheets — are still unfolding for climate scientists. Some aspects of future climate change may be more severe than models currently project, as this week’s new research points out. And some worst-case scenarios may not be as likely as they once seemed.

To parse it all out, it’s critical to account for all the factors that might affect the progression of climate change when making predictions about the future, Golledge says. In this case, his new research points to the melting ice sheets as key participants in the global climate system, whose influence may have been previously overlooked.

"I guess we’re just holding up a flag here and saying this is something we really need to look into," Golledge said. "And we need to do it as well as we can with as many models as we can and figure out if actually we’re underestimating the consequences."