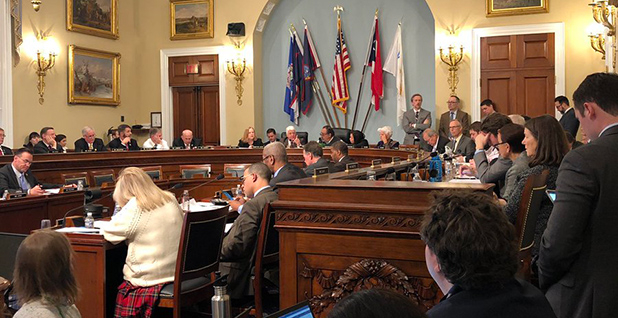 But the argumentative — and sometimes eccentric — Natural Resources Committee veered off script yesterday during debate over 10 amendments to the rules package, though there were ultimately no major changes. The committee ultimately approved the rules package with a voice vote.

Chairman Raúl Grijalva (D-Ariz.) opened the nearly two-hour meeting by noting his new perch presiding over proceedings, with now-ranking member Rob Bishop (R-Utah) to his right. The center seat at the dais is "somewhat intimidating," Grijalva acknowledged, but it’s also "a better view, I’ll tell you that."

The Arizona Democrat pledged that the majority would "make every effort" to work with the minority in a fair and prompt way. "This includes sharing witness testimony as it comes in, giving notice before a unilateral subpoena issued, and providing information about oversight and investigative hearings — not just legislative hearings," Grijalva said.

The meeting started off with a lengthy back-and-forth about the phrase "so help you God" in the committee oath. The Democrats proposed rules deleting the phrase; Rep. Garret Graves (R-La.) offered an amendment to keep it in, which Grijalva agreed to and included in his manager’s amendment.

Grijalva called the deletion a "mistake." But then various Democrats and Republicans decided to air their views on the topic for nearly 15 minutes. Finally, Grijalva called for a vote on the amendment, which ultimately passed.

"I hope we’ve established that no one side is more godly than the other, and whoever your higher power is, is OK," the Democrat said to laughs.

Graves also pushed an amendment that would require committee reports on legislation related to climate change to include the bill’s impact on the economy, as well as quantify greenhouse gas emissions reduced and the effect on sea-level rise. The committee voted it down.

Graves said that he is "not a climate change denier" and that his purpose in offering the measure was to obtain the best information available about the practical impacts of such legislation.

But Grijalva said the language could delay action on Democrats’ legislative priorities on combating and understanding climate change. "I don’t think this amendment would do anything to get to that goal."

Democrats viewed other GOP amendments as either not germane, too onerous or redundant. One from Arkansas Republican Rep. Bruce Westerman would have inserted language related to promoting forest resiliency through timber sales and thinning; another from Rep. John Curtis (R-Utah) would have required a seven-day notification about legislative hearings on federal land management to members in affected districts.

"There is no secret plan" to keep members in the dark about legislation that could affect areas in their districts, said Haaland.

Bishop, a former school teacher, offered a few amendments on some of his long-standing pet peeves. One measure, which he withdrew, would have banned the use of the term "bedrock" during committee debate, "except in regard to the Flintstones."

Democrats often use the adjective to describe environmental laws like the National Environmental Policy Act and the Endangered Species Act.

Another measure that Bishop offered and withdrew would have prohibited members from reading prepared statements at hearings to "encourage meaningful debate and dialog" and "help reduce repetitious arguments." As chairman, Bishop often skipped opening statements to speed things along.