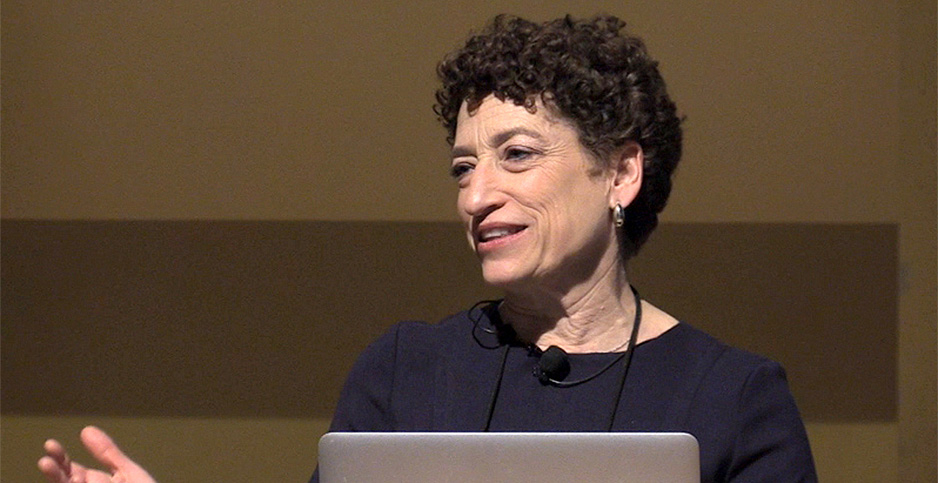 Naomi Oreskes is "honored" the fossil fuel industry is talking about her work, even if they are on opposite sides of the issue. College of the Environment, University of Washington

Naomi Oreskes is a familiar face on Capitol Hill.

The Harvard University professor has testified twice in as many weeks about the fossil fuel industry’s efforts to cast doubt on mainstream climate science.

Last week, Oreskes told the House Oversight and Reform Committee that Exxon Mobil Corp. knew about the dangers of carbon emissions in the early 1980s but continued to spend millions of dollars on attacking scientists and lobbying against climate regulations into the 2000s (E&E Daily, Oct. 24).

Fast-forward to this week, and the star academic was back on the witness stand before the Senate Special Committee on the Climate Crisis, where she expressed skepticism that there’s been a genuine shift in the oil and gas industry toward an acceptance of climate science (E&E Daily, Oct. 30).

The attention is nothing new for Oreskes. In 2010, she gained notoriety for the book "Merchants of Doubt: How a Handful of Scientists Obscured the Truth on Issues from Tobacco Smoke to Global Warming."

The 60-year-old New York native sat down with E&E News this week to discuss the parallels between Big Oil and the tobacco industry, the influence of climate deniers and the numerous attacks on her character.

You testified before Congress twice in the last two weeks. What was that like?

On one hand, it’s been very gratifying to see Congress taking seriously the way in which dark money and disinformation has delayed action on climate change. On the other hand, one of the things that came up at the hearing this week is that it took [former California Democratic Rep.] Henry Waxman 20 years to conduct those investigations of the tobacco industry, which I believe were historically game-changing. And I was sitting there thinking, "Oh dear, we don’t have 20 years."

Do you appreciate the fact Democrats in Congress are focusing on the fossil fuel industry’s effort to cast doubt on climate science?

Absolutely. I think many people are still not fully aware of just how much money has been spent and how much disinformation has been propagated by the fossil fuel industry on this issue.

Right now, there’s a tremendous amount of attention being paid to the fake ads and false information on Facebook. But people don’t realize that this has been going on in different ways for a long time. This has been a way of life in the fossil fuel industry since the early 1990s, and I think it has played a very large role in confusing the American people and making it difficult to generate political consensus for action on climate change.

Do you think there’s been a genuine shift in the oil and gas industry toward genuine acceptance of climate science?

No. A lot of people say that, and it makes my heart groan. It is true that many fossil fuel companies are saying things that seem pretty reasonable on their face, like "We know climate change is real" and "We know we need to do something about it." But I always say that my mama taught me actions speak louder than words. If you look at their actions, they continue to lobby billions of dollars every year against any meaningful climate action.

They also continue to invest in more exploration for oil and gas. And when you invest in exploration, you’re committing yourself to projects that can often take 10 or more years to yield results. So anyone who’s investing in oil and gas today is committing us to a future that is incompatible with stopping disruptive climate change.

At the House Oversight and Reform Committee hearing last week, Republicans attacked your research and integrity. What’s your response to that?

Well, this is a classic pattern of denialism. When you don’t like the message, you attack the messenger. So I consider myself honored to be included in a long line of incredibly important and distinguished scientists whose personal integrity was attacked by the fossil fuel industry and its cronies. I think it’s further evidence that they don’t have facts on their side, so they have to resort to character assassination.

Lawmakers have sought to draw a comparison between Big Oil and the tobacco industry on this issue. Is that an apt comparison?

It’s more than apt. I mean, I literally wrote the book on that [laughs].

One of the strange things about being in my position is that I get credit for things I don’t deserve, and then I don’t get credit for things I actually did. So here’s what I did not do: I did not launch a global conspiracy against Exxon Mobil. I’ve actually been accused of that [laughs]. I did write a book called "Merchants of Doubt," which documents how some very prominent scientists were involved in both climate change denial and the tobacco industry’s denial of the harms of smoking.

Well, I discovered this connection by accident. I didn’t set out to write a book about tobacco. But when [co-author] Erik Conway and I started looking into Fred Seitz, the past president of the National Academy of Sciences who had made misleading statements about climate change, we found that he had worked for many years with the R.J. Reynolds Tobacco Co. He had run a program for them designed to distract people from the harms of tobacco.

More broadly, we found that the tobacco industry had used the same strategies and tactics as those used to create doubt about climate change. They said there wasn’t a scientific consensus, that scientists didn’t really know, and that if the government acted to control tobacco, it would threaten our personal freedom. We have seen all those arguments used practically verbatim in the climate change debate. You could just take out the word "smoking" and put in "climate change."

When we started investigating that link, we also discovered this network of think tanks, organizations, so-called AstroTurf organizations, PR firms, advertising agencies and individual scientists like Fred Seitz who had been involved in casting doubt on a whole host of issues, including tobacco, acid rain and the ozone hole.

Where should the Oversight and Reform Committee take its investigation next? Which witnesses should it call?

I think it’s incredibly important for the committee to investigate not only the fossil fuel industry itself but also the network of third-party allies that have been involved with this. Obviously, getting fossil fuel executives on the witness stand in the same way that tobacco executives were on the stand would be important, as well.

I doubt any of them would say under oath, "I believe that there’s no climate change." I think they would say more subtle things like "It’s really complicated" or "It’s going to be expensive to fix." However, I still think it’s extremely important for these fossil fuel executives to testify, because I remember watching the tobacco executives testify on TV, and it was a sea-change moment. It really exposed to the American people just how incredibly cynical these people are.

Exxon is on trial in New York City over claims that it misled investors about the cost of climate regulations on its business. What are your thoughts on the case?

I don’t really want to comment on the details of that case. The only thing I could say is that the tobacco industry won a lot of cases until they finally lost. And if New York state loses this case for whatever reason, I don’t think that’s the end of this story.