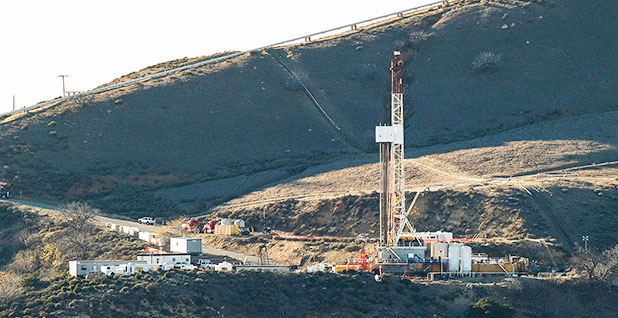 Third in a series of stories about carbon sinks and sources. Read part one here and part two here.

College students learn in Economics 101 that no one leaves $20 bills lying on the street. It is a rubric used to fortify the theory that big economic markets are sophisticated and that items of great value are prized and not often wasted. But when it comes to industries that leak natural gas — a powerful global warmer — into the atmosphere, the theory remains a matter that leads to scientific and political disputes.

A new scientific study, a summary of which appeared in the journal Nature yesterday, used ancient and new atmospheric samples and gives a boost to the gas industry’s side of the argument. Its data show that while gas production has soared in recent years, the industry’s rate of leakage appears to have declined.

Questions about the impacts of natural gas leaks first surfaced in Washington, D.C., in 2004. U.S. EPA had been concerned for years because the largest component of natural gas is methane, a potent greenhouse gas often released into the atmosphere as the result of human activities. It appears to be artificially warming the Earth.

That issue did not resonate deeply within Congress or the George W. Bush administration, but in 2004, the Government Accountability Office found a related matter that did: Oil and gas production on U.S. public lands generates about $9 billion annually, making it one of the largest non-tax sources of federal funds. The resource is overseen by the Interior Department, which is legally required to collect royalty payments and to make sure the public’s resources are not being wasted.

Yet there was evidence from EPA and some elements of the industry that in the explosion of hydraulic fracturing and other drilling techniques, government revenue was being lost — either by venting gas into the air, which releases methane, or by flaring it, burning it in the field, a practice that yields carbon dioxide, another major global warmer.

GAO recommended that the Interior Department try to measure and reduce the waste issue, and when there appeared to be little progress, two ranking House congressmen sent GAO researchers back to probe the Interior Department some more. In 2010, GAO reported that it had learned from EPA and industry sources that drilling on federal land was "releasing substantially more gas than previously thought possible."

The report notes that officials of the federal Bureau of Land Management, which oversees land-based oil and gas leases, and the Bureau of Ocean Energy Management, which watches offshore production, had little motivation to use new technologies, such as infrared cameras that can see major plumes of escaping gas. The result, GAO said, was that real leakage rates were running as much as 30 times higher than the Interior Department estimates.

The causes included faulty equipment, leaky storage tanks, "thousands" of valves set to vent too much gas, poorly prepared wells and an "institutional inertia" that led BLM officials to assume that if the gas leaks from flaring or venting were economically important, then the oil and gas companies operating the wells would do something about them.

Some companies did reduce leaks, the report noted, and there is a certain amount of "operational venting" that is required to run a gas or oil field, particularly in remote parts. But GAO found that a lot of the vented gas might have been saved, but that "often" smaller oil and gas producers didn’t have the time or expertise to do the analysis. The rules on preventing such waste that BLM followed were written in 1980, long before the warming hazards of methane were appreciated. The resulting policy was uneven. Both BLM officials and the operators of the leases interviewed by GAO frequently disagreed on which venting cases should be reported.

The result, according to the GAO report, was way, way more expensive than the proverbial $20 bill left in the street.

The United States had lost $58 million in federal royalty payments in 2008. With proper management, 40 percent of the lost gas might have been recovered and sold. The fugitive emissions of methane and CO2 were comparable to the emissions of 8 million passenger cars or 10 average-sized coal-fired power plants.

The Environmental Defense Fund, a New York-based environmental group, later commissioned its own testing of emissions from federally managed oil and gas fields and concluded that $330 million a year in natural gas resources were being wasted.

"This is a positive story," said Steven Hamburg, the chief scientist at EDF. "The data show that fixing this will be cost-effective for a relatively modest investment."

Unlike some environmental groups, which blame hydraulic fracturing, or "fracking," for the leaks, EDF says that fracking itself is not the issue.

"The good news is that it’s clear there is technical expertise that can control these emissions. You can have the infrastructure and the knowledge to do this with very low emissions. The question is figuring out why the emissions of some producers are much higher than others," Hamburg said.

This question may be about to be answered. On May 12, EPA adopted three new rules that will, for the first time, curb emissions of methane, along with smog-producing chemicals called volatile organic compounds and toxic pollutants such as benzene, a carcinogen, that are often released with methane in natural gas leaks. The rules, which for the first time require owners and operators to find and repair leaks, mandate fixed inspection schedules and urge the use of special infrared cameras and organic vapor analyzers, called "sniffers," to spot leaks.

EPA estimates the rules will cost producers $530 million and create climate benefits worth $690 million along with unspecified but valuable health benefits by removing sources from the air that cause asthma and other pollution-imposed health hazards. They will help the Obama administration reach its target of cutting methane emissions from the oil and gas sector by 40 to 45 percent from 2012 levels by 2025, according to the agency.

The rules will apply to hydraulically fractured wells, sources that were not covered by an earlier EPA move in 2012. But they will not happen without a fight. The American Petroleum Institute, which published a booklet in 2014 saying, "Federal statutes regulate every step of the hydraulic fracturing process," is up in arms.

"The development and use of natural gas from shale has helped the U.S. lead the world in cutting power-sector carbon emissions, which are near 20-year lows," said Kyle Isakower, API’s vice president of regulatory affairs. "The last thing we need is more duplicative and costly regulation that could discourage natural gas production, disrupt our progress reducing emissions and increase the cost of energy for American consumers."

Oil and gas groups plus 16 states have filed court challenges against the new rules. Meanwhile, environmental groups plus nine states and the city of Chicago have filed motions to defend EPA’s actions (EnergyWire, Aug. 17).

There are more fights to come. Colorado became the first state to impose regulations on methane emissions from oil and gas operations in 2014. After that, state inspectors found leakage at 152 well pads. According to letters to the companies from the state’s Air Pollution Control Division, the leaks were so large that inspectors could smell the gases and hear the hiss of escape. Doug Flanders, a spokesman for the Colorado Oil & Gas Association, said the letters came as a shock.

"This [rule] is the first of its kind. We are the only state that actually regulates methane — sometimes to be able to get to that spot where you need to be within those regulations, it can just take a while," he said (ClimateWire, June 22).

Now California is preparing to enact statewide methane rules in the wake of a massive methane leak at the Aliso Canyon natural gas storage facility, the worst in U.S. history. Officials in Pennsylvania are discussing a similar move, and Wyoming has imposed rules on fields in one part of the state.

Finally, scientists who have the ambitious and difficult task of trying to search the atmosphere for methane emissions that reveal whether they were generated by human activity are involved in their own private brawl over whether we really understand how big and widespread the causes of rising methane levels really are.

In March, a study published by Petra Hausmann of the Karlsruhe Institute of Technology in Germany said that there are two main sources of increasing methane emissions on the planet, one from wetlands in the tropics and another from fossil fuel exploitation. "The relative contribution of these two drivers remains highly uncertain," her paper says.

In April, a second study published by Hinrich Schaefer, an atmospheric scientist in New Zealand, concluded that the main causes of the continuing, ominous rise in methane emissions come from wetlands in the tropics and agricultural operations, such as rice growing, and that they are much larger than oil and gas emissions (ClimateWire, March 11).

Yesterday, a study led by Stefan Schwietzke, a scientist at the National Oceanic and Atmospheric Administration’s Earth System Research Laboratory in Boulder, Colo., said that a detailed study of atmospheric samples, some taken from ancient ice cores and others taken recently, shows that the leakage rate from natural gas production has declined in recent decades, despite a sharp increase in natural gas production and distribution.

While accountants and engineers in the oil and gas industry may take some comfort in the finding, the net effect is that the atmosphere still sustained damage, according to the author of the study.

"All the efficiency gains have been almost 100 percent counterbalanced by increased production," Schwietzke explained in an interview, referring to recent company efforts to find and minimize leaks.

The study used carbon isotopes, a kind of chemical fingerprint, to identify sources of methane leaks and found that fossil fuel industry emissions plus natural geological methane seepage have not increased over time. However, it also concluded that measurements used by previous studies appear to have underestimated the size of these emissions. They are "60 to 110% greater than current estimates," the study said.

The Schwietzke study took its findings from an expanded array of atmospheric samples and agrees with the earlier study that natural methane sources such as bacteria-produced methane from wetlands and some forms of agriculture, such as rice production, may still have a more detrimental impact on the atmosphere.

Schwietzke notes that his study conflicts with others that use ethane emissions as a kind of tracer to estimate methane emissions from natural gas, but he pointed out that such conflicts are part of the scientific process that eventually resolves disputes. The study does not pinpoint regions of higher emissions.

"We’re getting closer to finding the true global averages. If satellites get better in the future with higher spatial resolution, I think they might be able to answer some of these questions," he said.

Eric Kort, a climate and space scientist at the University of Michigan who has used ethane emissions to identify high sources of methane emissions from U.S. oil and gas fields, says he doesn’t see a downside from the conflict. "If there are a small number of emitters responsible for a large fraction of emissions, that’s providing very useful information," he said.

Tomorrow: Getting rid of a super-warmer.