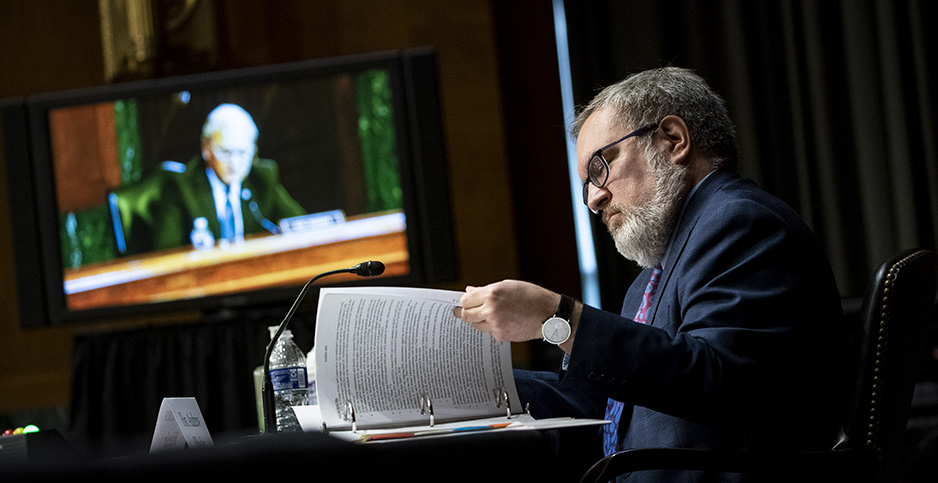 EPA Administrator Andrew Wheeler testifies in the Senate in May. He's overseeing a weakening of methane rules against the wishes of Navajo Nation leaders. Al Drago/CNP/AdMedia/SIPA/Newscom

On a day in late June, Navajo and Pueblo tribal activists met virtually with EPA and White House officials to urge them to reverse a decision that would weaken rules governing the release of methane at oil and gas wells.

EPA is preparing to finalize a rule later this month that would significantly lighten requirements for fossil fuel producers and remove the regulations entirely for natural gas transmission and storage facilities.

The agency’s proposed replacement would permit the industry to conduct fewer searches for methane leaks and reduce remediation for a broad swath of the oil and gas sector. It would also rule out the possibility that older oil and gas wellheads would become subject to regulation in the future.

But Native American advocates on a June 30 teleconference stressed that those changes would put their communities at risk by undermining air quality and public health on and near Navajo Nation tribal lands in New Mexico. The region, which has been the site of oil, gas, coal and uranium production for a century, has the highest concentration of methane emissions in the U.S.

Julia Bernal of Pueblo Action Alliance said she told officials with EPA and the White House Office of Management and Budget that the federal government had neglected to look at the damage that scrapping the methane rules would do to people in the Four Corners region. The area, which straddles the borders of Utah, New Mexico, Colorado and Arizona, is home to hundreds of thousands of Native Americans.

"There’s already a huge methane cloud that sits over the Four Corners area in the Southwest," Bernal said in an interview. "Indigenous people have raised those concerns. How come that hasn’t been addressed?"

EPA’s removal of federal methane curbs for new oil and gas wells might have an outsize impact on the San Juan Basin of northwestern New Mexico. That’s because the Trump administration’s rollback is designed to head off future regulations for existing oil and gas infrastructure.

The basin is an older oil field that saw declining production even before the coronavirus pandemic caused a massive contraction in the sector this spring. Many of the wells there might not have been covered under EPA’s methane rule, known as a new source performance standard, because they’re too old.

But they would have been regulated under a rule tailored to cover existing infrastructure. If EPA gets its way, that rule may never be written (Climatewire, Aug. 15, 2019).

There’s little air quality monitoring in the San Juan Basin or Chaco Canyon. Some local experts talked to for this story said that’s because of the patchwork of land ownership in the area, which is divided among federal, state and private landholders.

Others pointed to understaffing at the New Mexico Environment Department or to jurisdictional issues between EPA’s regional offices. Still others said landowners who stand to profit from oil and gas development don’t allow access for monitoring.

But environmental and health advocacy groups have tried to fill the data gap, and their research shows high levels of methane, particulate pollution and volatile organic compounds linked to ozone near production sites. All of those substances carry health risks.

Data from the Environmental Defense Fund shows that San Juan County, where more than half the Native American population lives within a half-mile of a production site, is second in New Mexico only to the Permian Basin for its methane levels.

The American Lung Association’s 2020 State of the Air report, which ranks counties’ ozone and airborne particulate pollution levels, or smog, gave San Juan County an F for ozone. It lacked data to assess its particle pollution.

A community group called the Counselor Chapter Health Committee in 2019 published its own study of air quality in a section of Navajo Nation land in New Mexico, much of which has been leased for oil and gas development. Air monitoring at eight sites over one month in April and May in 2018 showed fine particulate matter concentrations spiking at more than twice the level considered hazardous by EPA.

Particulate pollution, or PM2.5, is linked to a host of respiratory and cardiovascular illnesses and premature death.

"I’ve been in those areas where some of the flaring and oil and gas sites are, and it smells bad. It smells like rotten eggs," said Carol Davis, director of Diné Citizens Against Ruining our Environment (CARE), which requested the teleconference with EPA.

"People have said that their doctor has recommended that they relocate — living with relatives, somewhere else — that their health conditions would improve," she said. "And they have."

Studies have shown that proximity to natural gas flaring is linked to premature birth. But Davis said she was especially concerned about the impact on the community’s elders.

"One of the biggest things that has always been a concern is that there’s just a disproportionate number of development sites within or near our communities where our old people live," she said.

Prolonged exposure to hazardous pollutants like particulate matter and ozone have been linked to worse health outcomes from COVID-19, the disease caused by the coronavirus.

Nearly 20% of the 172,000 people who live on Navajo Nation land have tested positive for the coronavirus, partly due to a lack of running water for washing. The reservation experienced a higher per capita death rate than any state, but it’s unclear whether pollution contributed.

Davis said she told the EPA and OMB staff during the June meeting that the agency should delay finalizing the methane rule until after the pandemic, to allow for more input from tribal members who stand to be impacted.

The EPA oil and gas package — which includes changes to monitoring and repair requirements and a less extensive rule for limiting natural gas leaks — has already undergone public comment.

An EPA spokesperson told E&E News that the agency’s policy was to consult "on a government-to-government basis with federally recognized tribal governments when EPA actions and decisions may affect tribal interests."

The agency said it "offered consultation to 500 tribal governments" on the oil and gas regulatory package, which moved through the proposal stage in two pieces.

"We received no requests for consultation on either proposal," the spokesperson said.

But Nez, the Navajo president, criticized EPA for failing to analyze the rule’s impact on tribes and consult meaningfully on the rule as part of his comments on the methane rule last November.

"Not withstanding its numerous other flaws, the Navajo Nation requests that EPA withdraw the proposal until the agency fulfills its obligations which, at a minimum, requires an analysis of the impacts to Indian tribes and government-to-government consultations," he said.

"The agencies in my experience have treated these issues as sort of checking a box rather than the type of meaningful engagement I think is intended under those two statutes," said Kyle Tisdel, an attorney with the Western Environmental Law Center.

Nez opposed the EPA rulemaking. But Davis said the president shouldn’t be the sole point of contact between the federal agency and the Navajo Nation.

"We want the opportunity for community stakeholders to also be part of that tribal consultation because otherwise what happens is you have federal agencies like EPA that are interacting just with the Navajo president’s office," she said. "You’re not getting the input of the people who are directly impacted by whatever kind of development is going on."

Window Rock, Ariz., the Navajo capital, is 90 miles away from the oil rigs in the San Juan Basin and Chaco Canyon.

The best way to get that input, Davis said, is by holding discussions at local gathering places on the reservation and providing information in both English and Navajo — the main language spoken by a large segment of the population.

But such meetings would be impossible during the pandemic, and the reservation’s limited internet and cell access often makes virtual meetings impossible.

Davis and her group made that case when pressing the Bureau of Land Management earlier this year to extend its public comment period for a draft resource management plan that would open land around Chaco Culture National Historical Park to oil and gas leasing. The area is home to 1,000-year-old ruins left by the ancestors of the Pueblos (Energywire, July 21, 2015).

While Congress recently put a 10-mile buffer around the park’s core archaeological site, indigenous and environmental groups say historically significant sites are scattered throughout the area and BLM has failed to do an ethnographic study to find out where they are. BLM, under pressure, agreed to extended the public comment period on that rule to September.

Davis’ organization, which uses the pre-Hispanic name for Navajo, tries to keep local communities informed but is limited because it can’t hold public gatherings due to the pandemic. But she said federal agencies rarely send staff to meet with the Navajo on issues that matter to them.

"That for us was a win. Because we had chapter houses where people did show up and participate and make public comment," she said.

Bernal, of the Pueblo Action Alliance, said that too often the onus falls on tribes — and their limited resources — to make consultations happen, rather than on the federal agencies making the decisions.

"It’s always us, poor brown Indigenous folks having to travel to D.C. to talk to these people who have never been out to our territories before and have no idea what’s going on," she said.

Past presidents of the Navajo Nation have embraced resource extraction — not only oil and gas, but coal and uranium — as a source of economic development. But the current tribal administration has stressed the need to diversify the Navajo Nation’s economy into wind energy and other sectors.

Daniel Tso, who serves as a member of the Navajo Nation Council, has taken some visitors from Washington on tours of Navajo lands leased for oil and gas — including House Natural Resources Chairman Raúl Grijalva (D-Ariz.).

Tso singled out the Bureau of Indian Affairs for shirking what he called its fiduciary duty to warn Navajo allotment owners that hydraulic fracturing would affect their land differently than conventional drilling.

Many small landowners who signed over their rights a decade ago in exchange for a royalty have lost the ability to use their land and water for grazing and other activities, he said.

"It was the responsibility of the Bureau of Indian Affairs to have explained this kind of new technology, but they were basically hiding in the shadows while this tsunami of oil and gas development pervaded over the landscape," Tso said.