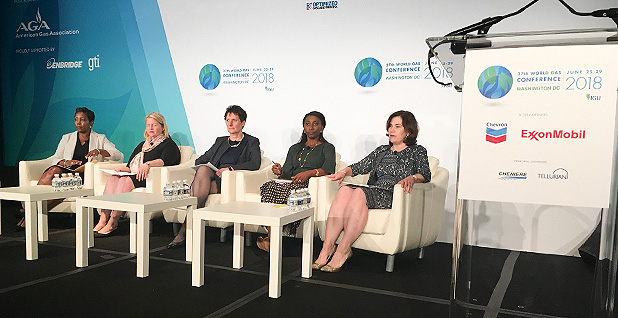 Katie Mehnert’s dad warned her not to go into oil and gas.

Mehnert weighed her options and went to journalism school, but eventually the call of the family business pulled her to roles at Enron Corp., Royal Dutch Shell PLC and BP PLC. She’s now the founder and CEO of Pink Petro, a social network for women in the oil and gas business (Energywire, May 26, 2015).

"What’s a pretty young lady like you doing in a dark, dangerous business like oil?" he asked, swirling his glass of bourbon.

A diverse workforce can serve as "cultural informants," she said. Glover once worked for a company that wrote its bill inserts in Spanish, thinking that the materials would be helpful to Spanish-speaking customers. But when they handed the pamphlet to a colleague who was a representative of the demographic the company was trying to reach, he didn’t understand the language. The text was in a dialect that was completely different from what people in that neighborhood spoke, she said.

"It’s still a male-dominated industry, but it’s our responsibility for those of us who have gone through the decades to put those enabling mechanisms in place for the younger ones to thrive."