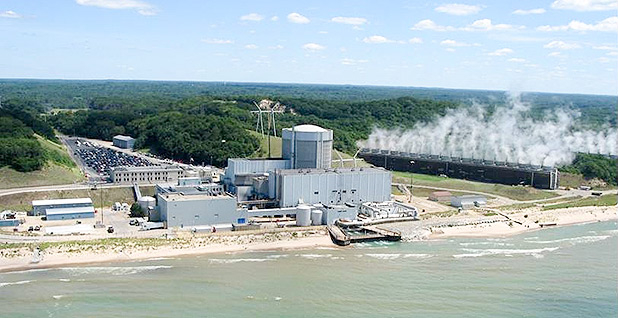 Michigan regulators gave Consumers Energy the go-ahead Friday to recover more than $142 million from ratepayers as the utility seeks to buy out the remaining years of a contract to buy energy from Entergy Corp.’s Palisades nuclear plant.

Consumers Energy, a unit of Jackson, Mich.-based CMS Energy Corp., sought PSC approval earlier this year to sell bonds to buyout the remainder of a purchased power agreement (PPA) with the Palisades plant. The PPA lasts through April 2022.

The Michigan PSC ultimately approved a lesser amount to be repaid with funds recovered from ratepayers over the next six years. Still, customers are expected to save money over that period because the energy from Palisades will be replaced with lower-cost sources.

Commissioners declined to approve the full $184 million sought by Consumers Energy because they disagreed with assumptions about congestion costs on the transmission network as a result of the Palisades shutdown and the discount rate used to calculate the current value of future customer savings.

Consumers announced last fall a plan to buy out the remainder of the PPA agreement with Palisades. Even with ratepayers kicking in the cost of the buyout, the utility said it could replace the energy and capacity from other power plants at a savings to customers.

The agreement would pave the way for Entergy to shut the single-reactor plant in a year.

Palisades is one of a number of merchant nuclear plants threatened with early retirement as inexpensive natural gas, increasing penetration of renewable energy and slack electricity demand undercut prices needed for reactors to remain profitable.

Unlike nuclear plants in Illinois, New York and some other Eastern states, though, there’s been no real effort, even among nuclear advocates, to keep the Palisades plant operating through ratepayer-funded subsidies.

Consumers Energy didn’t comment on the timing of an agreement with Entergy. The utility said Friday afternoon that it was reviewing the commission ruling.

"We appreciate the Michigan Public Service Commission’s thorough review of our proposal to terminate our contract with Entergy and replace the power with lower cost supplies," the company said in a email statement.

Company executives are expected to address further questions about the Palisades contract during an analyst meeting today.

New Orleans-based Entergy likewise said Friday that it is reviewing conditions in the PSC order before deciding whether to reconsider the decision to shut the plant, said Charlie Arnone, site vice president at Palisades.

The Palisades plant, named for the surrounding barrier sand dunes on the eastern shore of Lake Michigan, was built by Consumers Energy and began operating in 1971. The utility sold it to Entergy a decade ago and agreed to a 15-year PPA to buy energy and capacity.

The securitization authorized by the Michigan PSC’s order is $44 million less than what Consumers Energy requested.

The PSC on Friday emphasized that Michigan and the rest of the Midwest has adequate electricity supplies over the next five years, based on forecasts. But commissioners urged Consumers Energy to move swiftly to secure capacity to replace the 800 megawatts of power it now gets from Palisades.

Consumers Energy has said it will replace the Palisades output through a combination of ways, including energy efficiency, demand response, and expansions of wind and natural gas generation.

Meanwhile, the Michigan Agency for Energy said it will work with local officials in the southwest part of the state to prepare for the impact of the Palisades closure whenever it occurs. The plant employs about 600 people.

"Priority must be given to figuring out long-range strategies to best mitigate the effect on schools, budgets, jobs, businesses and communities," said Valerie Brader, the agency’s executive director. "The state is fully committed to partnering with the community to help in any way."

Consumers Energy and Entergy have pledged to provide $10 million to help lessen the economic impact if the plant is shut down next year.