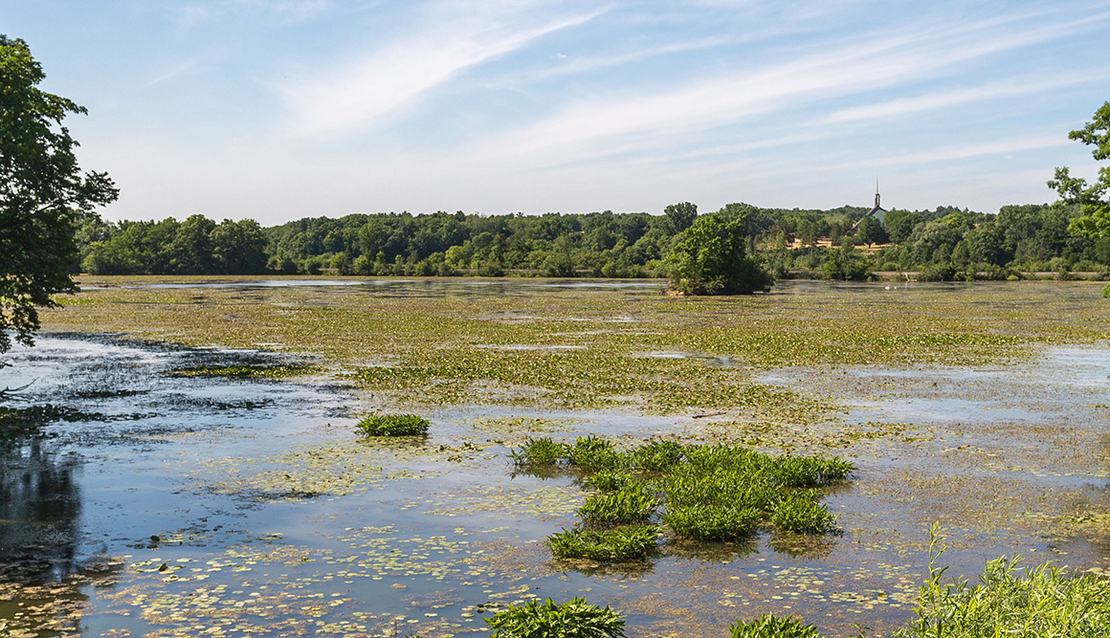 A view of Huron River near Ann Arbor, Mich. Andypiper/Flickr

Michigan regulators today served violations to the company behind the spill of thousands of gallons of a cancer-causing chemical into a popular Michigan river — the main source of drinking water for the city of Ann Arbor.

The spill has fueled calls for EPA intervention and a retooling of state laws.

State regulators served Tribar Manufacturing LLC multiple violation notices and ramped up enforcement for failing to immediately notify authorities of the release of more than 10,000 gallons of hexavalent chromium into a wastewater treatment plant along the Huron River, an event lawmakers like Democratic Michigan Rep. Debbie Dingell in recent days have called “inexcusable and deeply disturbing.”

The Michigan Department of Environment, Great Lakes and Energy in its release said Tribar has until Aug. 20 to explain what led up to and caused the spill, stating that “repeated requests by EGLE investigators for this critical information have not been adequately addressed by Tribar.” The state also said it will seek full cost recovery from Tribar.

The incident in recent days has been top of mind for Michigan lawmakers, environmental groups and the nation’s auto industry.

Hexavalent chromium is considered an occupational human carcinogen by the National Institute for Occupational Safety and Health. It is best known as the contaminant battled by the activist Erin Brockovich, an effort later dramatized by Hollywood.

While EGLE hasn’t asked for EPA’s assistance, Dingell this week called on EPA Region 5 Administrator Debra Shore to quickly help investigate the release, citing “growing alarm and uncertainty from downstream residents and across southeast Michigan” in the wake of the spill. “Therefore, it is critical, moving forward, for EPA to be directly involved in this emergency response and to ensure all responsible parties are held accountable,” Dingell wrote in a letter to Shore.

The Huron River watershed — which spans more than 900 square miles with a web of creeks and streams beginning at the Huron Swamp, a heavily forested wetland near Pontiac, Mich. — culminates into the Huron River and flows more than 100 miles before reaching Lake Erie.

The controversy comes amid growing awareness around contaminants and the risks they pose — a national trend that is playing out with particular urgency in Michigan.

Several years since the Flint water crisis made headlines, the Great Lakes state has struggled with some of the country’s most high-profile fights against chemicals, including contaminants scrutinized by EPA, such as the plume of 1,4-dioxane migrating under Ann Arbor. Arguably the most prominent are per- and polyfluoroalkyl substances — chemicals that Tribar also spilled into the Huron watershed in 2018.

Overseers of the watershed say that early test results looking for hexavalent chromium downriver of the waste treatment plant are promising. But advocates are also joining Dingell in querying why such spills keep happening in Michigan and across the country.

Since the chemical release, EGLE has taken 144 water samples along 42 miles of the river, and three of those samples have come back with detections of hexavalent chromium.

Rebecca Esselman, director of the Huron River Watershed Council, said lawmakers have slowly chipped away at “polluter pays” laws in Michigan. Those were reversed under the administration of former Gov. John Engler (R), and Esselman said recent efforts to strengthen those rules have run face-first into the state’s Republican Legislature.

Tribar’s spill has helped inflame tensions, including new campaigns pressuring U.S. automakers to rid their supply chains of the toxic chemical. The chrome-plating company, Tribar, has previously been connected to contaminants before, including sparking an advisory against eating fish after it discharged PFAS into the Huron River. Tribar has also been slapped with at least one air quality violation notice.

“If we dodge a bullet here or not, there’s plenty of places on the map that have not in the past, and that will not in the future,” said Esselman. “It’s just a matter of time if we don’t regulate industry enough to keep our environment and our people safe.”

Michigan regulators first alerted the public to the recent spill on the afternoon of Aug. 2.

Just 20 minutes prior, Tribar had notified EGLE that it had spilled several thousand gallons of a liquid containing 5 percent hexavalent chromium into the Wixom Sewage Treatment Plant, which releases wastewater into Norton Creek, a tributary of the Huron. According to the release, Wixom officials said Tribar indicated the spill may have started as early as July 30.

People and pets should “avoid contact” with the river downstream of the wastewater treatment plant, including Norton Creek, Hubbell Pond and Kent Lake, according to the release.

The spill occurred in the heart of the Huron River’s watershed, a haven for boaters and anglers and a source of drinking water for more than 125,000 people in Ann Arbor.

EPA does not individually regulate hexavalent chromium but does have limits in place for total chromium, including hexavalent, which is set at 100 parts per billion. Michigan's own standard is 11 ppb for long-term exposure and 16 ppb for short-term exposure.

State officials have said it could take several weeks or longer for the chemical to make its way to Ann Arbor’s water intake, if it reaches that far. In recent days, Ann Arbor’s City Council passed a resolution to take legal action if necessary and moved to ramp up testing to be able to identify when and if the contamination reaches the city’s intake.

Dingell in her letter called on EPA to fulfill Ann Arbor’s request for federal officials to help with emergency response and coordination on-site, including the use of labs and analytics.

This is not the first time Tribar’s actions have impacted the Huron watershed.

In 2018, Michigan became the first state to require municipal treatment plants to evaluate their industrial sources of PFAS. The state’s probe led to the discovery of high levels of PFAS in industrial wastewater from Tribar’s facilities, according to EGLE, prompting the company to install pre-treatment to reduce and remove PFOS in its discharge.

PFOS is one of the two most well-researched members of the chemical family and has been linked to severe health outcomes, including cancer, kidney disease and developmental harm (see related story). That chemical has also been found to bioaccumulate in fish (Greenwire, June 15, 2021).

While EGLE issued a violation notice seeking correction actions, the stage agency said no fines were issued and cleanup of the watershed was not feasible.

“They had basically taken steps to reduce or virtually eliminate their emission of PFAS, a lot of hard work," said Clift. "They were within their permit limits … until this happened."

Michigan has notably drawn praise for its response to PFAS at a time when national concern around chemical contamination is mounting. The state has launched mass testing, resulting in some of the highest-recorded PFAS levels in the country.

"We just think we're more aggressive in looking for it than other states," said Clift. "And if you look for it, you're going to find it."

That approach to testing has not necessarily translated into a major crackdown on industry. Like many other states, Michigan has sued major PFAS manufacturers over contamination. But companies like Tribar, linked initially to PFAS and now to a separate spill, occupy a gray area around corporate liability for toxic releases in the state.

Clift said it was too early to gauge whether Tribar was truly a repeat offender.

"We don’t know enough about this to say, ‘Hey, is this what you would consider a bad actor who’s ignoring laws’ or did something else happen in this case," he said.

The recent spill has compounded a growing push for accountability, one that has mounted at the state level in Michigan as well as nationally.

Also known as the Superfund law, the Comprehensive Environmental Response, Compensation and Liability Act is one of the nation's most powerful tools in addressing deeply contaminated sites. At the core of that statute is the principle that entities responsible for pollution should have to foot the bill for cleanup. That law authorizes EPA to compel those polluters to pay up, in a system widely supported by environmental advocates and panned by industry members.

In 1990, Michigan enshrined its own law modeled after CERCLA. But through a 1995 change under the Republican Engler administration, the law's liability standard changed — limiting who could be held responsible and scaling back the extent of cleanup required. Under current Michigan law, companies are required to contain and limit contaminants, but cleanup costs are largely shifted to the public.

In recent days, advocates and lawmakers have argued that the polluter-pays principle needs to be revived. Michigan Democrats in particular have been pushing their own legislation shifting costs on to polluters.

Democratic state Rep. Jim Ellison, who co-authored the legislation, told E&E News he was prompted to take action after “green ooze” containing hexavalent chromium was discovered two years ago splashed on the side of a busy interstate, contamination that was traced back to a metal plating company in his district in Madison Heights.

“We found out there was no way to hold these guys responsible. The Engler administration got rid of all of these laws that made the polluters pay and so we've been struggling ever since,” said Ellison, adding that Michigan’s industrial groups have repeatedly fought state polluter pay reforms.

While Ellison is term-limited and doesn’t expect much action on his legislation in the waning days of this year’s session, he expects someone to introduce the bills in coming years and hopes to attract Republican support in the wake of the spill on the Huron River.

But Caroline Liethen, director of environmental and regulatory policy for the Michigan Manufacturers Association, said Rabhi’s bill would impose standards that would slow or even stall the process of remediating and closing contaminated sites. Liethen also said that today’s violations show that the state’s current process is working and “liable parties are held liable.”

Michigan's back-and-forth comes as EPA is in the process of targeting certain PFAS under CERCLA, a move that has spurred broader conversations about forcing polluters to pay up.

Members of the waste and water industries have lobbied for exemptions from CERCLA designation in particular, worried that it could harm business and that EPA is moving too quickly (Greenwire, May 24). But advocates and lawmakers alike have taken the opposite approach, arguing that regulators should be moving more quickly.

In remarks last week, Dingell queried why it was taking so long for regulators to issue the CERCLA designation (E&E Daily, Aug. 4). She made those comments while also highlighting the hexavalent chrome spill in her home state and broadly emphasizing accountability on the part of companies responsible for pollution.

Rabhi, who spoke alongside Dingell during that event, took a similarly hard line, emphasizing action at both the federal and state levels.

"My belief is that polluters should ultimately have to pay to clean up the messes that they make," Rabhi said, ultimately asserting: "I believe in polluter pay laws in Michigan."